New Democrat MP Murray Rankin tried for the second day to elicit more information about notes contained in Duffy's diary that suggest he was communicating with the oil and gas company, which is trying to establish a pipeline to the West Coast as well as reverse an existing pipeline to Montreal.

Duffy's calendar, which was made public as evidence in his trial on 31 charges of fraud, breach of trust and bribery, includes repeated references to conversations with Enbridge, which in 2010 launched the federal regulatory process to build the Northern Gateway pipeline from Alberta through British Columbia to ship oil to Asia.

A spokesman for Enbridge last week said any discussions were unsolicited, to the point it notified the Prime Minister's Office of the conversations.

On Monday, Rankin asked the government about two lines in the calendar.

"Why did the prime minister ask Mike Duffy to send him a note on, I quote, Enbridge Line 9 problems, on Feb. 17, 2012, and what was contained in the note Mr. Duffy sent to the prime minister's chief of staff and Enbridge executives on Feb. 20 of that year?"

No answer from Conservatives

Paul Calandra, Prime Minister Stephen Harper's parliamentary secretary, said he rejected the premise of the question, and quickly turned it to the subject of expenses for which the NDP has been told to repay the House of Commons.

"I'm not going to comment on matters that are in front of the court, Mr. Speaker. But this member could help me, and could help Canadians, recover the $2.7 million that the NDP owe them for illegal offices, Mr. Speaker," he said.

The calendar suggests Duffy, who was named to the Senate by Harper in late 2008, seemed to follow the debate over TransCanada's proposed Keystone XL pipeline and Enbridge's Northern Gateway proposal.

"At no time did Enbridge solicit Senator Duffy's help to lobby the federal government. In the interest of clarity, we also took the extra step to notify the Prime Minister's Office at the time, that Senator Duffy did not represent Enbridge or our interests."

Harper's spokesman refused to say whether the PMO took steps to deal with Enbridge's complaint, saying the matter is before the courts.

In an interview Monday on CBC News Network's Power & Politics, Calandra said the Conservatives have no idea what Duffy is talking about. He refused to address the question of how the PMO responded to Enbridge. 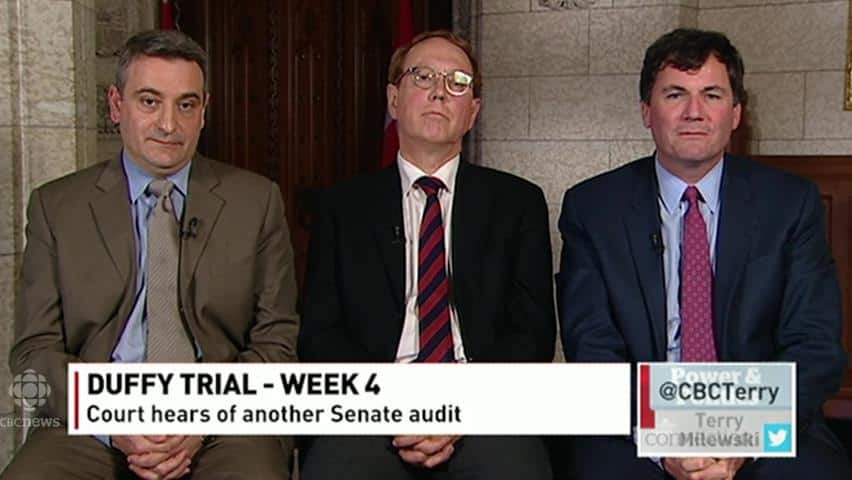 The NDP have written to Lobbying Commissioner Karen Shepherd to ask her to examine whether Enbridge violated the lobbying code of conduct.

A spokesman for Enbridge said the communication regarding Duffy's lobbying didn't have to be logged.

"In this case, based on the circumstances of the conversation, it was not required to be registered under the Act or its regulation," Graham White wrote in an email.

White didn't answer CBC's questions about how Enbridge told the PMO about Duffy's discussions with them.
Communications initiated by a public office holder don't have to be reported.

Duffy kept detailed notes in his calendar, including the names of people he ran into at the airport or in restaurants. He noted phone calls every day, sometimes simply by writing the person's name or the subject of the call.

A PDF version of that electronic calendar has been presented as an exhibit at his trial.