Michael Sona sentenced to 9 months in jail for 'callous' robocalls

Former Conservative staffer Michael Sona has been sentenced to nine months in jail plus a year on probation for trying to keep some voters in Guelph, Ont., from casting ballots in the 2011 federal election. 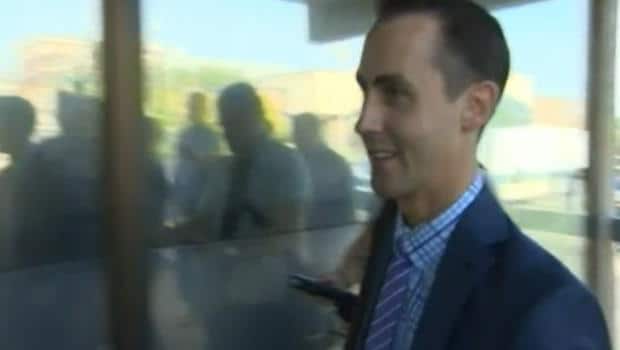 6 years ago
2:11
The former Conservative campaign worker was handed nine months in jail plus a year probation for his election robocalls conviction 2:11

Former Conservative staffer Michael Sona has been sentenced to nine months in jail plus a year on probation for trying to keep some voters in Guelph, Ont., from casting ballots in the 2011 federal election.

Earlier, Hearn said Sona's crime showed a "callous and blatant disregard for the right of people to vote" and said Sona was a major participant in this "ill-conceived and disturbing plan."

"This was not an amateurish grade eight election campaign for student council," Hearn said.

Those concerns had to be balanced with letters of support describing Sona as a very responsible, industrious, compassionate, responsible young man, Hearn said. Sona is employed as a machinist's apprentice by a member of his church group in Ottawa.

Sona, 26, was the only person charged with planning and setting loose a misleading robocall that hit 6,000 voters in Guelph in an attempt to keep them from casting ballots in the May 2, 2011, federal election. He was found guilty in August and faced a maximum penalty of five years in prison and a $5,000 fine.

Between 150 to 200 people who received the robocall went to the wrong place to vote.

Could be out in 3 months

Sona could be granted parole after three months, his lawyer said after the sentencing.

"I always have concerns for anyone being in jail," Norm Boxall said. "I don't have concerns that I wouldn't have for someone else."

Sona is considering an appeal and consulting another lawyer, Boxall said, but those decisions are best made after a few days of reflection and not in the immediate emotional aftermath of the sentencing.

The sentence seems to be unprecedented — the first jail time ever assigned to someone for breaking the Canada Elections Act.

NDP ethics critic Charlie Angus said it's appropriate that Sona will spend time in jail for the crime, and said this is the second court judgment about misleading robocalls "where questions have been raised as to who else has been involved."

"We had the Federal Court ruling before on robocalls, it said clearly there's a connection back to the Conservative database, clearly calls were made," Angus said.

"To believe that Mr. Sona was a lone wolf who orchestrated all this, it's not credible. I would invite Mr. Sona, as part of his rehabilitation, to tell us who else — who else — was involved."

The Ottawa Citizen first reported the investigation by Elections Canada at the end of February 2012, as well as the suspected link to the Conservative Party's voter database, CIMS. Sona's name was reported by another news agency soon after. He immediately quit his new job working for Conservative MP Eve Adams.

At last month's sentencing hearing, Crown prosecutor Croft Michaelson said Sona should serve 18 to 20 months in jail because of the serious nature of the offence, and the attack on the electoral process and constitutional rights.​

The Crown also asked for community service, and stipulations that Sona not volunteer for political campaigns and apologize to Guelph residents.

Michaelson said Sona has shown a complete lack of remorse and has told friends he is trying to rehabilitate his reputation. Michaelson said he needs to accept personal responsibility for his conduct.

Others may have been involved

Boxall submitted three sentences for the judge to consider:

Michaelson conceded he was willing to accept 18 to 20 months of house arrest, but said Sona shouldn't be allowed to work in that time.

While Sona was found guilty, questions remain about who else may have been involved in the crime.

Hearn said in August that he is "fully satisfied" Sona at least aided or abetted those involved in what became known as the robocalls scandal, though he added he believes Sona had help from one or more people.

With files from Ron Charles