The man who says he sent the infamous blackface photo of Liberal Leader Justin Trudeau to Time magazine said he did so because the Canadian public had a right to see it.

The man who says he sent the infamous blackface photo of Liberal Leader Justin Trudeau to Time magazine said he did so because the Canadian public had a right to see it.

Last week, the American newsmagazine dropped a bombshell on the Canadian election campaign when it reported that Trudeau dressed in blackface and a turban back in 2001 for a gala event West Point Grey Academy, the private B.C. school Trudeau taught at 18 years ago.

Time reported that it had obtained the photo from Vancouver businessman Michael Adamson, who was identified as being "part of the West Point Grey Academy community," but Adamson himself has remained silent.

Until now. Adamson released a statement Friday addressing the controversy.

"Earlier this month I communicated with a reporter from Time magazine regarding the existence of a photograph showing Justin Trudeau wearing brownface at an event while he was a teacher at West Point Grey Academy," he said in a written statement.

"As a past member of the WPGA community, I had been aware of gossip surrounding the existence of this photograph and was in a position to provide a copy of it from the school yearbook to the Time reporter."

Adamson said he has never been a member of a political party and received no payment for releasing the image.

"My decision to provide it to Time magazine was motivated solely by the belief that the Canadian public had a right to see it," he said.

Adamson said his written statement will be the only public comment he'll be making on the matter.

"I ask the media and others to respect my privacy and that of my family."

CBC News approached Adamson at his Vancouver home on Friday and Adamson declined to speak further. 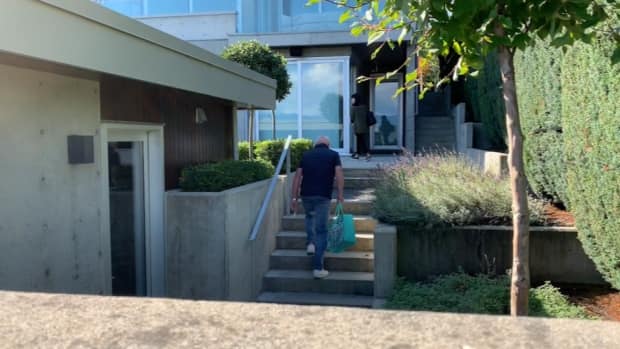 1 year ago
0:31
Michael Adamson tells CBC he has no further comment than what was in his written statement. 0:31

When Time magazine published its explosive report, it said little about Adamson beyond his connection to the school and how the photo came to his attention.

"He said that he first saw the photograph in July and felt it should be made public," Time reported.

The report immediately upended the federal election campaign and prompted media organizations, including CBC News, to seek out Adamson for further comment and to learn more about the man. Many details that CBC News has confirmed were first reported by the Globe and Mail on Thursday night.

Over the years, Adamson and his wife have donated thousands of dollars to private schools in the Vancouver area, including West Point Grey Academy, which their son Bennet attended early in his education.

In 2003 and 2004, Adamson and his wife Kumi Adamson were listed as "diamond sponsors" of the West Point gala, online archives show. A diamond sponsor is defined by the school as someone donating $5,000 or more.

In later years, the couple donated at least $100,000 to another private school, St. George's, from which Bennet graduated in 2015.

Bennet is seen in St. George's newsletters and student publications as a member of the school's rowing team, and DJing a school dance.

The Adamsons also donated thousands of dollars to local charities, including the PALS Autism Society and the Vancouver Public Library.

Fred Lee, a Vancouver society columnist and a regular contributor to CBC Vancouver, said Adamson "is a generous individual who has supported many charities."

A source who knows Adamson personally told CBC News that he is "definitely not a rabid conservative."

Connection between Adamson and Time

Bennet Adamson appears to be the key link connecting his father with the Time reporter, Anna Purna Kambhampaty, who broke the story.

Adamson and Kambhampaty both attended Cornell University, where Adamson is studying architecture. Kambhampaty graduated in June with a bachelor's degree in information science.

Kambhampaty posted a photo of herself holding a giant Toblerone chocolate bar on her Instagram account the same month, thanking Bennet Adamson for giving her a graduation gift.

Since the Time story was published, Kambhampaty deleted her Instagram account, but CBC News was able to get an archived version of the photo.

Kambhampaty wrote about going to see the band Vampire Weekend perform with her friend Bennet in April, in a column for the Cornell Sun paper. In another section of the same column, she said Bennet is a "dear friend."

In an interview with NPR after the story was released, Kambhampaty said she had heard about the photo "as a source of gossip in Vancouver community and contacted a source to see the photo and was sent the yearbook."

She added that the gossip was circulating among "people who had formerly worked there, parents, former parents. It wasn't widely talked about, but a few people were talking about it."

Since the Time story published, conspiracy theories about how the photo was acquired have circulated online.

Some Twitter users have pointed out that a Michael F. Adamson in Toronto is listed as a donor to the Conservative Party of Canada as well as Conservative Leader Andrew Scheer. However, that's not the right Michael Adamson; the Michael Adamson who supplied the photo's middle initial is R, not F, and he is based in Vancouver, not Toronto.

Others online questioned whether Adamson even existed, and wondered why the photo was supplied to an American outlet and not a Canadian one. But Adamson's son's relationship with the Time reporter sheds some light on how they may have connected.

Concerns over the story sparked complaints to the Office of the Commissioner of Canada Elections, a spokesperson told CBC News.

"I can confirm that our office has received complaints, but can't say more beyond that," Myriam Croussette, senior communications advisor for the Office of the Commissioner of Canada Elections, wrote in an email. "There are provisions in the Canada Elections Act that prohibit undue influence by foreigners. However, these provisions include exceptions with regard to the transmission of news to the public through media."

Separately, the Security and Intelligence Threats to Elections Task Force — which monitors potential foreign interference in the October election campaign — told CBC News it "does not have any publicly available assessments to share" regarding the photo.

The task force is chaired by the Communications Security Establishment, the country's signals intelligence agency, and includes the Canadian Security Intelligence Service, the RCMP and Global Affairs Canada.