After an election that reduced the governing Liberals to a minority, Prime Minister Justin Trudeau is making a number of changes to his cabinet to adjust to new political realities.

Five of the seven new additions to cabinet come from the Montreal, Toronto areas

After an election that reduced the governing Liberals to a minority, Prime Minister Justin Trudeau is making a number of changes to his cabinet to adjust to new political realities.

Trudeau is swapping out some cabinet stalwarts for new faces to grapple with the challenges ahead for his government — primarily restless western provinces beset by pipeline constraints and disruptions in the energy economy.

Trudeau has tapped Peace River, Alta.-born Chrystia Freeland to serve as deputy prime minister and minister of intergovernmental affairs, the cabinet portfolio that will deal directly with the country's premiers.

The new Trudeau cabinet is decidedly Toronto- and Montreal-centric. Of the 36 cabinet ministers Trudeau appointed, seven are from Montreal and 11 are from the Greater Toronto Area. Five of the seven additions to cabinet come from those urban areas.

Asked today about the the lopsided nature of the new cabinet, Trudeau said, "We are responding to the caucus we were given."

Here is a closer look at the new faces around the cabinet table:

Anand is new to Canada's Parliament, having just won a seat in the Toronto-area riding of Oakville on Oct. 21.

Anand is one of just two rookie MPs being elevated from candidate to cabinet. Quebec environmentalist Steven Guilbeault is the other. Anand takes on the role of minister of public services and procurement at a time when the government is finalizing the multi-billion dollar purchase of new fighter jets.

Anand, a native of rural Nova Scotia, has an impressive academic resume with degrees from some of the world's most prestigious universities, notably Oxford in the United Kingdom.

She worked as a University of Toronto law professor and the J.R. Kimber Chair in Investor Protection and Corporate Governance at the university before running for the Liberals.

Anand is known as an expert in shareholder rights. The former provincial Liberal government in Ontario appointed Anand to its expert committee on financial planning policy alternatives, which recommended regulatory reforms of the financial planning profession — such as proficiency requirements for practitioners — to protect consumers.

Anand is one of three newly elected women from Ontario appointed to cabinet.

Mendicino, a former federal Crown prosecutor, takes over for Ahmed Hussen at immigration.

Mendicino is a skilled communicator and the Prime Minister's Office has often relied on him to defend the government on TV news programs like CBC's Power & Politics.

Mendicino handled some high-profile cases during his decade as a Crown prosecutor, taking on organized crime and terrorists — including members of the "Toronto 18," an al Qaida-inspired group that plotted to bomb the CBC broadcast centre in Toronto and Parliament Hill in Ottawa, among other targets in southern Ontario.

In the last Parliament, Mendicino served as parliamentary secretary to the minister of justice (he held that job when Jody Wilson-Raybould was minister) and then to the minister of infrastructure. Mendicino was often on hand for major transit announcements in the Greater Toronto Area.

Mendicino was the co-chair of the Liberal Party's campaign efforts in Ontario. The party performed well in the province, maintaining its grip on Toronto-area seats that had been targeted by the Conservatives.

Miller, a lawyer by training, has been a close friend of Trudeau since their days as students at the prestigious Collège Jean-de-Brébeuf in Montreal.

Miller will be this government's minister for Indigenous services. His new department delivers government programs that are mainly geared toward status Indians, including welfare, education, infrastructure (including the push to end long term boil-water advisories) housing and the non-insured health benefits program. He is the third such minister since the portfolio was first created in December 2017.

Among his early tasks will be deciding how to compensate First Nations kids after a landmark Canadian Human Rights Tribunal ruling on the country's child welfare regime. The government has said it would appeal the decision. 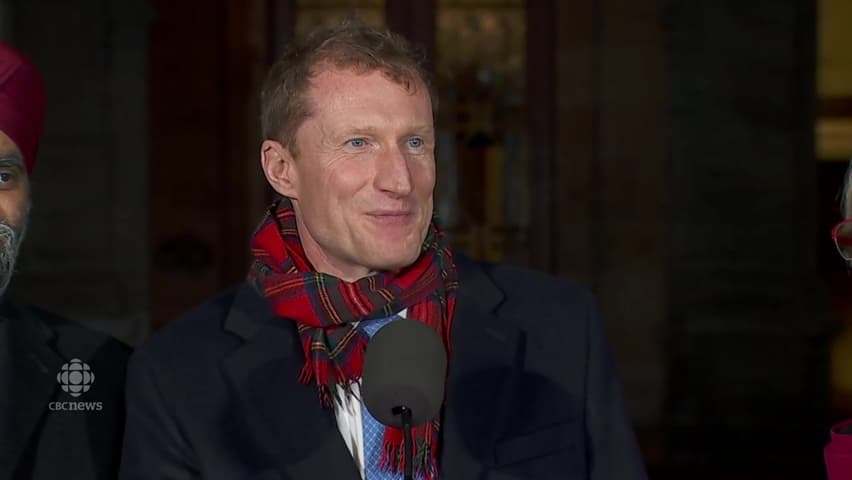 1 year agoVideo
4:05
Montreal-area MP Miller has been elevated to cabinet. Since being elected in 2015, Miller has learned to speak Mohawk, a complex Indigenous language spoken by Iroquoian peoples. 4:05

Miller has impressed his House of Commons colleagues by mastering Mohawk, a complex Indigenous language (there are some 80 pronouns) spoken by Iroquoian communities in southern Ontario and Quebec and in upstate New York.

Miller, a non-Indigenous anglophone, has been in intensive language-training classes for a number of years under the tutelage of teachers at Onkwawenna Kentyohkwa, a community-based training program run by the Six Nations of the Grand River near Brantford, Ont. Miller is thought to be the first person to speak the language on the floor of the Commons. 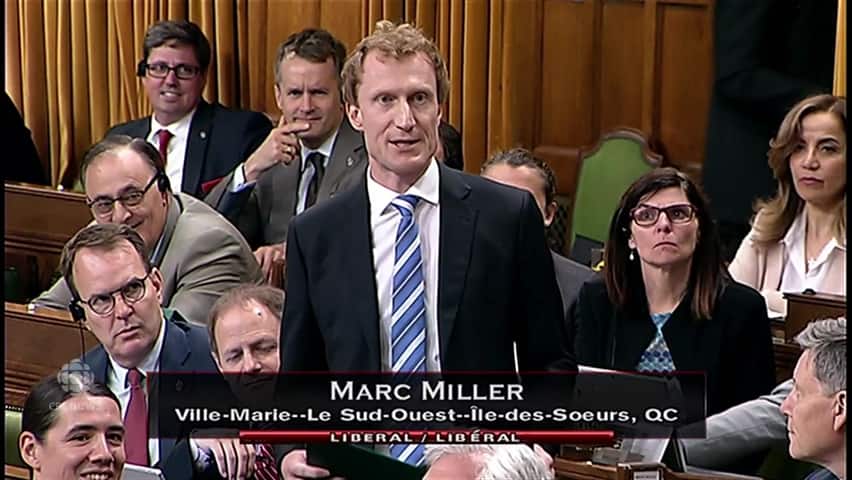 4 years agoVideo
1:00
Quebec Liberal MP has been quietly learning Mohawk for several months, and delivered a statement in that language in the House of Commons Thursday, a first in a Canadian legislature. 1:00

Before his promotion to cabinet, he served as the parliamentary secretary to the minister of Crown-Indigenous Relations.

The Liberal Party performed reasonably well in Quebec and Trudeau is giving MPs from that province some high-profile roles.

Guilbeault — a household name in the province, where he is known for his environmental work and ardent opposition to pipelines — won in Laurier-Sainte-Marie, a riding previously held by the NDP in Montreal's east end.

Guilbeault co-founded environmental activist group Équiterre and has been an outspoken opponent of the Trans Mountain pipeline.

He once scaled Toronto's CN Tower to protest government inaction on climate change and to pressure the government of the day to implement the Kyoto Protocol. He featured prominently in the party's Quebec-focused campaign advertising.

During the election, Trudeau said Guilbeault alone would not decide the government's approach to climate change. And Guilbeault will serve not in an environment-related portfolio; he was appointed heritage minister. That portfolio involves managing the federal government's interventions on  culture-related matters. CBC/Radio-Canada, Telefilm Canada, the Canada Council for the Arts and other arts-focused Crown corporations fall under the purview of the heritage minister.

One of the first tasks for Guilbeault will be to execute the government's overhaul of the Broadcasting Act and enact a campaign promise to tax digital giants like Netflix.

Fortier is the MP for Ottawa-Vanier, a riding traditionally associated with the city's Franco-Ontarian community. It's one of the safest Liberal seats in the country.

Fortier will serve in a new portfolio as the minister of "middle class prosperity". She also will serve as the associate minister of finance, second-in-command to Finance Minister Bill Morneau. Trudeau has promised that the first piece of government legislation going forward will enact his new middle class tax cut; it could be Fortier​​​​​​'s job to sell it to Canadians.

She was most recently co-chair of the party's national platform committee, which helped develop the Liberal policy agenda ahead of the Oct. 21 vote.

Fortier, a communications professional and a long-time Liberal Party activist, is a well-known advocate for the minority francophone community in Ontario. She served on the board of directors of Montfort Hospital, a French-language health care facility in the city's east end that narrowly avoided closure in the 1990s.

In the last Parliament, Fortier championed the passage of a private member's bill that changed the lyrics of the country's national anthem to render them gender-neutral. That bill was first introduced by the late Mauril Bélanger, the past MP for Vanier and a mentor to Fortier.

Fortier has been elevated directly from the backbench to cabinet. She did not serve as a parliamentary secretary in the last Parliament.

Schulte has been elevated to cabinet as minister for seniors after serving as the parliamentary secretary to the minister of national revenue.

Schulte is a surprising addition to cabinet, as she has kept a relatively low profile in Ottawa since she was first elected in 2015.

After that election, Schulte was seated at a desk on the government back bench that was furthest from the Speaker's chair.

In just four years' time, Schulte has moved from that low-profile spot on the seating chart to a chair around the cabinet table — a meteoric rise.

Her most noted legislative achievement in the Commons to date was a motion to declare June Italian Heritage Month.

Schulte, who represents the York Region riding of King-Vaughan north of Toronto, has a degree in mechanical and aerospace engineering from Princeton University.

She worked for more than two decades at Bombardier Aerospace. Later, she served as a councillor with the City of Vaughan.

Vandal, a Métis from Manitoba, is the only Indigenous person in Trudeau's cabinet. Vandal will serve as the minister of northern affairs. The ministry implements the country's northern and Arctic policies, including environmental assessments of major natural resources projects in the North and the Nutrition North food subsidization program.

Vandal, a former boxer, worked as a social worker before entering political life when he was elected to represent the historically francophone neighbourhood of St. Boniface on Winnipeg city council.

During his time on council, he served as deputy mayor and helped develop the city's Aboriginal Youth Strategy.

Before his promotion to cabinet, he served as the parliamentary secretary to the last minister of Indigenous services, Seamus O'Regan, who moved on to the natural resources portfolio in Wednesday's shuffle.