The Liberals and the NDP have taken aim at the Conservative government in the House of Commons over the safety of Canada's meat supply.

Delay in warning Canadians about E. coli outbreak among issues raised in Parliament 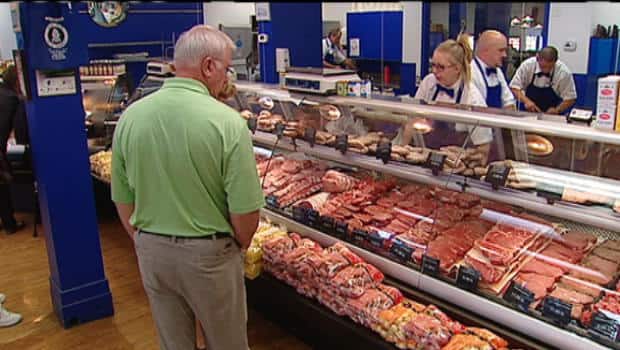 8 years agoVideo
3:39
Across the country, Canadians are nervous and eating cautiously, after 4 people got sick eating steak from an Alberta meat processing plant 3:39

The Liberals and the NDP tore a strip off the Conservative government Monday over the safety of Canada's meat supply.

Mulcair conjured memories of the Maple Leaf Foods listeriosis outbreak of 2008, which was blamed for the deaths of 23 people and happened under the watch of current Agriculture Minister Gerry Ritz.

The Listeria scare was undoubtedly a low point in the political career of Ritz, who faced calls for his resignation after The Canadian Press reported he was making jokes during a conference call with scientists, bureaucrats and political staff.

Ritz later apologized for the remarks, which included describing the political dangers of the crisis as "death by a thousand… cold cuts" and expressing the hope that one of the victims of the outbreak would turn out to be Liberal MP Wayne Easter.

"It was not funny then, and it is not funny now," Mulcair said. "Is this the best they have to offer Canadians who are worried whether the food they are giving their kids is safe?"

Integrity of CFIA at issue

Defence Minister Peter MacKay — standing in for Prime Minister Stephen Harper — responded by insisting Ritz, who was not in the House for question period, is "working very hard and is working sincerely to ensure that this issue is dealt with appropriately."

MacKay said the Conservatives have introduced new legislation to improve food safety and the Canadian Food Inspection Agency's ability to respond quickly to problems, but blamed the NDP for standing in their way.

"When we have tried to do this, made new investments, brought new legislation forward to improve safety for Canadians, that leader and that party have opposed it all the way."

Some 700 food inspectors, 170 of them "specific to the subject of meat inspection," have been added to the government rolls since 2006, MacKay added.

Rae, meanwhile, demanded to know why it took more than two weeks for the federal government to notify Canadians about the risk of meat from the XL Foods plant in Brooks, Alta.

The plant had its licence temporarily suspended last week amid a broadening ground-beef recall throughout Canada and eight U.S. states. Since Sept. 16, the CFIA has issued at least seven recall alerts for ground beef from the plant over E. coli concerns. There are no reported cases of people getting sick from eating the ground beef.

MacKay chose to ignore Rae's specific question, instead insisting that Ritz was on the job and "has held officials accountable" on the XL Foods issue.

"We have more legislation now," he said. "We have more investment directly into the issue of having more inspectors."

"We have increased the CFIA's budget by $156 million during our time in government. There is more front-line workers and more safety for Canadians."

Pierre Lemieux, Ritz's parliamentary secretary, said there were 46 federal inspectors on the job at the XL Foods plant at the centre of the outbreak — a 20 per cent increase over the last three years.

Lemieux was responding to Malcolm Allen, the New Democrat MP from Welland, Ont., who said 12 separate recall notices have resulted in the disposal of more than 860 metric tonnes — some 1.9 million pounds — of beef.

"It is the government's cuts and policies of self-regulation that have failed," Allen said. "In this case, XL failed to protect food safety. By the time the CFIA inspectors got involved, the contamination had spun out of control."

Rae drew a direct line between the XL Foods problem and several Canadian cases of E. coli poisoning, including that of a nine-year-old girl who suffered kidney failure as a result.

"Our thoughts are certainly with anyone affected by this issue and I know that is where the minister is concerned first and foremost," MacKay said.

E. coli O157:H7 is potentially deadly. Health officials say it can cause bloody diarrhea, dehydration and, in the most severe cases, kidney failure.