A new way to interview the prime minister

Sunday night, CBC News brings you Prime Minister Justin Trudeau 'Face to Face' with 10 ordinary Canadians with their own set of concerns. As chief correspondent Peter Mansbridge says, it's a new way to interview the PM.

The first prime minister I interviewed was Pierre Trudeau. It was in the late 1970s during an era of very conventional formats.

David Halton, the CBC's legendary chief political correspondent then, and I sat at a highly polished Parliament Hill table alongside the prime minister, and questioned him on the issues of the day.

It was formal, somewhat stilted and, for the most part, predictable.

And so it went as the years passed by — more conventional interviews with the prime ministers that followed: Joe Clark, John Turner, Brian Mulroney, Kim Campbell, Jean Chrétien, Paul Martin and Stephen Harper.

Occasionally, these interviews would make news, but rarely would we break format.

In the nineties we tried when we initiated the idea of putting the prime minister in front of a "town hall" group of Canadians.

It was refreshing, but didn't last after the participants became upset with Chrétien for not answering their questions. The prime minister and his handlers didn't like that, thought it was a setup and — guess what? — we didn't get any annual interviews for a couple of years after that.

There's one other interview format that most PMs do like, though. It comes at Christmas when the prime minister's staff wants the interview sitting next to a roaring fire and a decorated tree.

Somehow those sessions rarely lend themselves to any productive accountability.

In 2014, after arguing with the prime minister's office about the background, we managed to shoot the interview in such a way you didn't see the fire or the tree, and we managed some good exchanges with Stephen Harper, some of which resulted in comments that still haunt him today. 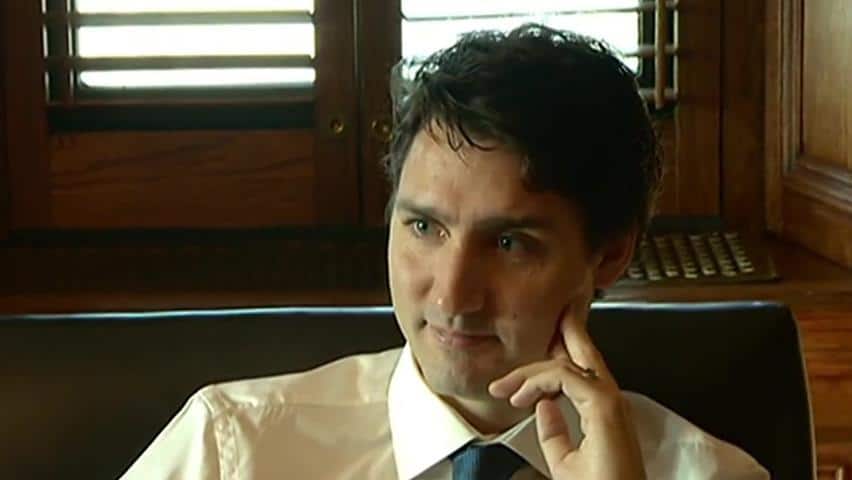 Behind the scenes with Justin Trudeau on his 1st day as PM: Inside the PMO

5 years ago
7:40
Peter Mansbridge visits inside the Prime Minister's Office with Justin Trudeau on his first day as prime minister 7:40

For example, he responded to a question about a potential inquiry into murdered and missing indigenous woman by saying "it's not on our radar."

For the past dozen or so years, I've tried hard with the different PMOs to really try to change the format, to break down some of the awkward rules that have governed these sessions for decades.

I couldn't find any interest — until last Nov. 4 when Justin Trudeau was sworn in.

He and his team had campaigned on the promise of openness and accessibility, so we called them on it.

For the day of the swearing in, we asked, would he wear an open microphone and let us follow him around for the hours immediately before and after the change of government? In other words, give us real access.

He agreed, and that's just what we did. The resulting program that same night was a hit with viewers on CBC and CBC News Network, and still commands a 90 per cent "thumbs up" rating from the nearly 300,000 viewers who have watched it on YouTube.

Those who responded positively said things like "Give us more" and "Keep showing us what really happens."

So what could we do for an encore? We doubled down.

In December, we passed on the idea of doing the Christmas tree year-ender, we passed on the conventional town hall format and, instead, we thought of something completely different, which is what you will see on Sunday night. In prime time. For an hour. With no commercials.

We're calling it "Face to Face" and it's exciting and unpredictable. It's access in a very real and different way.

In a nutshell, here's how it will work. We have selected, and let me underline that, WE have selected, without any consultation with the prime minister's office, 10 Canadians from across the country, all of whom have a particular concern about a specific issue, as the Trudeau government reaches 100 days since the election.

We have brought these Canadians to Ottawa where each will get 10 minutes, alone, with Justin Trudeau, in his office, to make their case and hear his answers.

When I say alone I mean: no PMO staffers, no security (the RCMP will have vetted the participants), no Peter Mansbridge hovering over the scene getting in the way. Just the prime minister and each of these individuals, face to face.

There will be two CBC camera operators in the room to capture the moment for you and the rest of the country.

What's more, all 10 of those encounters will have been shot before we go to air Sunday night, and the best moments of each will be featured in our broadcast, with the full sessions to be available in their entirety online.

Prime Minister Trudeau will also join us at that time as we review the encounters and the issues they reveal.

All that will unfold in front of an audience inside the Parliament buildings.

Will it work? Who knows? That's the beauty of unpredictable television.

TV that breaks the format. TV that challenges new boundaries looking for something different.

Ultimately you'll be the judge, and we know you'll not be shy about giving us your verdict.