The federal government is imposing strict, mandatory quarantine rules on travellers returning to Canada and is promising heavy fines and jail time for those who ignore the warning.

Returning travellers with symptoms will be barred from public transit, health minister says

The federal government is imposing strict, mandatory quarantine rules on travellers returning to Canada and is promising heavy fines and jail time for those who ignore the warning.

Health Minister Patty Hajdu said early Wednesday that, "effective at midnight tonight," all travellers returning to Canada — with the exception of what the federal government is calling "essential workers" — will have to enter a mandatory 14 days of isolation under the Quarantine Act whether or not they have symptoms of coronavirus.

"This new measure will provide the clarity for those re-entering the country about the essential need to self-isolate," she told the Senate, where she was discussing the Liberal government's emergency legislation to free up billions of dollars to help Canadians weather the COVID-19 crisis.

Starting Thursday morning, border officers were to begin informing all returning Canadians and permanent residents of the new orders and telling them that they're forbidden to stop along the way.

Hajdu's department said maximum penalties for failing to comply with the order include a fine of up to $750,000 and/or imprisonment for six months. If someone jeopardizes another's life "while wilfully or recklessly contravening the act"
the penalties are even greater: $1 million or three years in prison, or both.

Spot checks will be conducted by the government of Canada to verify compliance, according to health officials.

11 months ago
0:39
Health Minister Patty Hajdu says all travellers returning to Canada — with the exception of what the federal government is calling "essential workers" — will have to enter a mandatory 14-day quarantine as of midnight to try to slow the spread of COVID-19. 0:39

"My officials are working with [the Canada Border Services Agency] right now to ensure that people know that this will be serious and that there will be significant penalties if people violate the quarantine," Hajdu said.

Hajdu said no one will be permitted to quarantine anywhere they can come into contact with vulnerable people; those who, for example, live with an elderly person or someone with a compromised immune system will have to quarantine elsewhere. She said the Public Health Agency of Canada will make arrangements for those people to stay somewhere else, such as a hotel.

It took hours to clarify a ban on public transportation.

Hajdu told the Senate that individuals who exhibit symptoms will be banned from taking public transit to their places of isolation — but later said that all returning travellers will be forbidden from taking city buses, trains and subways.

"So all travellers who don't have an opportunity to return in a private vehicle will be provided transportation to their destination," she said.

At 10 p.m. ET her office sent out a press release that clarified individuals "displaying symptoms of COVID-19 after arriving in Canada" may not use public transportation to travel to their place of isolation.

There was also some confusion about travellers who have connecting flights to other airports in Canada.

Earlier Wednesday, Hajdu said travellers who are arriving at one of the four international airports and connecting "will be asked to quarantine in place in those cities for 14 days and we will provide the accommodation and meals for those situations."

A health official later clarified that only people with symptoms will be quarantined in the city of arrival and that travellers without symptoms can continue on and isolate at their homes.

The government has been pleading with Canadians to self-isolate if they've returned from a trip since mid-March, but this move under the Quarantine Act makes it a legal obligation.

"But let me emphasize, you should be doing this already," Deputy Prime Minister Chrystia Freeland told reporters during a briefing on Parliament Hill Wednesday.

"It's a serious further step."

Freeland said the mandatory quarantine will not apply to truck drivers and health care workers crossing the border. Hajdu's team stressed exempt individuals will still need to practice social distancing and contact their local public health authority if they start to feel sick.

NDP health critic Don Davies said it's the right move since so many Canadians have ignored the warnings to stay home.

"We must flatten the curve. We all need to stay home and stop the spread of the virus. We want to thank everyone who is self-isolating and, of course, all the essential service workers who are taking care of us," he said in a statement.

"However, since many others are still ignoring the recommendation from health experts, it makes sense that the government has to bring in stronger rules.

RCMP says it's ready to help

Some provinces already have made arrests under their own emergency measures.

On Friday, Quebec City police arrested a woman who tested positive for the coronavirus after she went out for a walk, violating a quarantine order.

Nova Scotia has given police the power to enforce the province's Health Protection Act, which bans gatherings of more than five people and allows for fines of up to $1,000 for individuals and $7,500 for business owners.

The RCMP said it's already working with provincial and territorial health authorities and will provide assistance as required.

She said the federal Quarantine Act doesn't give police any new powers, but peace officers will play an assistance role in response to requests from screening or quarantine officers. 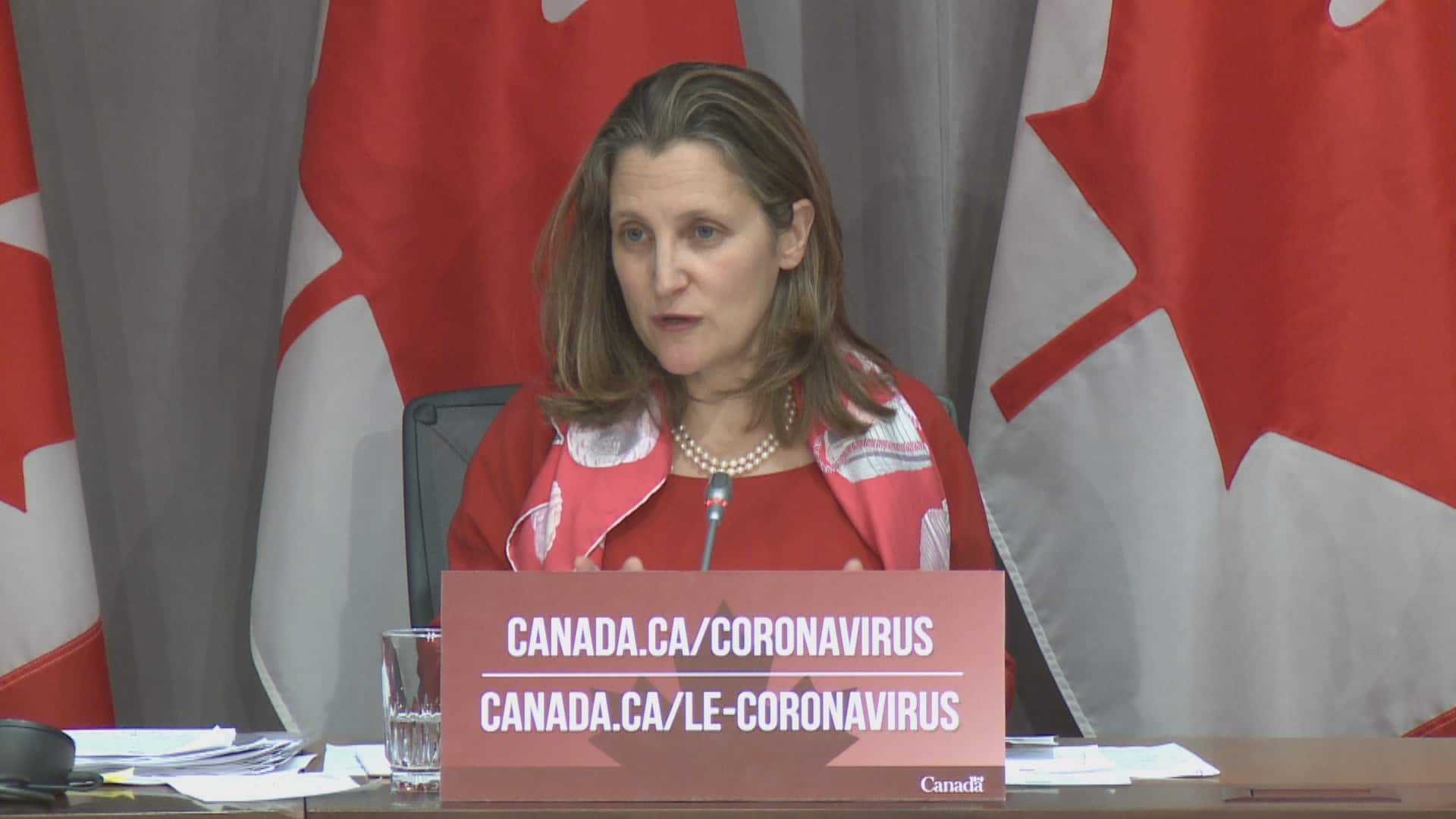 11 months ago
1:24
Deputy Prime Minister Chrystia Freeland says that, starting at midnight, border officials will be taking the contact information of travellers entering Canada to ensure they are abiding by the mandatory 14-day self-quarantine. 1:24

Hajdu has been signalling tougher measures under the Quarantine Act were on their way for several days now.

The federal Quarantine Act, which was updated in 2005 after the deadly SARS outbreak, gives the federal health minister the power to designate quarantine zones and fine or jail travellers who disobey quarantine orders.

If a designated quarantine officer believes that a traveller has refused to isolate themselves, they can ask a peace officer to arrest the traveller and bring them into quarantine.

On Sunday, Hajdu said the government was looking at all the measures in their tool box, including criminal penalties.

She has also suggested a "hotline" might be established to allow concerned Canadians to report cases of noncompliance.

Freeland said the issue of mandatory quarantines was debated at length during the Monday meeting of the cabinet coronavirus committee.