An exclusive Nanos Research poll suggests the majority of Canadians want the Senate changed or abolished. 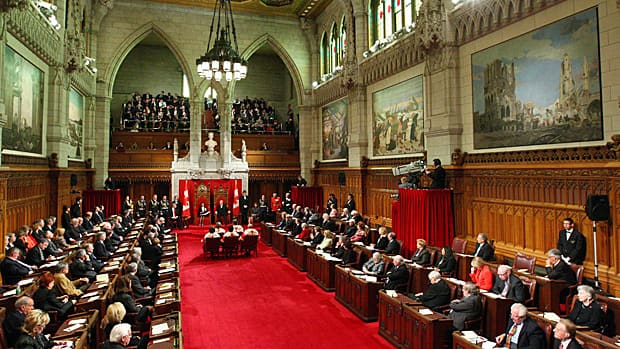 8 years agoVideo
6:39
Should the Senate be reformed or abolished? 6:39

The majority of Canadians want the Senate changed or abolished, according to an exclusive Nanos Research poll for CBC News Network's Power & Politics.

The percentage of Canadians who think the Senate should be left as it is.

The survey was conducted amidst a controversy over senators' expense claims. Four Senators have been accused of misspending taxpayers' money by claiming hundreds of thousands of dollars in illegitimate expenses. The reputation of the upper chamber has suffered as a result, the CBC/Nanos poll suggests.

The survey asked Canadians what they would like to see done with the Senate. Respondents were overwhelmingly against the status quo, with 49 per cent supporting reform of the Senate and 41 per cent preferring it be abolished. Just six per cent said leave it as is, while four per cent were unsure.

The random survey of 1,000 Canadians was conducted between June 8 and 11. That is before the RCMP announced it was conducting a criminal investigation of a $90,000 cheque by the prime minister's former chief of staff to repay Senator Mike Duffy's expenses.

Participants in the survey were randomly recruited by telephone and administered a survey online. The margin of error for a random survey of 1,000 Canadians is plus or minus 3.1 percentage points, 19 times out of 20.

Nik Nanos said the results underscore the fact Prime Minister Stephen Harper hasn't been able to deliver on his promise of Senate reform, something that was a major policy plank for the old Reform party, and that could be problematic for him with his base supporters.

"I think for a lot of tried and true Reformers and members of the Canadian Alliance, especially from Western Canada, it's been short shrift. There hasn't been a lot delivered on that front."

This might not be a national political issue for Harper, Nanos said, but it is a crucial issue for many Conservative voters.

It's unlikely that Senate reform will be a defining issue in the next election, Nanos said. Canadians are still focused on the economy. Nevertheless, the Senate controversies have damaged Harper's reputation.

"He can't take these hits over and over again, because we have to remember, as the Conservatives say, this is Stephen Harper's government," Nanos said. "They've built their track record, their success, their brand around Stephen Harper. They have to protect that brand."

Nik Nanos digs beneath the numbers with CBC News Network's Power & Politics to get at the political, economic and social forces that shape our lives. Recognized as one of Canada's top research experts, Nik Nanos provides numbers-driven counsel to senior executives and major organizations. He leads the analyst team at Nanos, is a fellow of the Marketing Research and Intelligence Association, and is a research associate professor with SUNY (Buffalo) and a 2013 public policy scholar with the Woodrow Wilson International Center for Scholars in Washington.