RCMP have laid a charge in absentia against a Syrian intelligence officer accused of torturing Syrian-born Canadian Maher Arar, the first-ever charge of its kind in Canada.

RCMP have laid a charge in absentia against a Syrian intelligence officer accused of torturing Syrian-born Canadian Maher Arar, the first-ever charge of its kind in Canada.

Arar's lawyer, Paul Champ, said in Ottawa today that RCMP will attempt to extradite Col. George Salloum to Canada to face a charge of torture, which RCMP later confirmed. A Canada-wide warrant and Interpol notice have been issued for his arrest.

"The RCMP will continue to work with its domestic and international law enforcement and security partners in locating Salloum in order to begin the extradition process to bring him to Canada where he will face justice," a statement said.

Arar was tortured in a Syrian jail after being sent there by U.S. officials in the wake of the Sept. 11, 2001 attacks.

His wife Monia Mazigh read a statement on his behalf today, commending the RCMP for laying the charges.

"It is my hope that Col. George Salloum will be found alive, arrested and will be extradited to Canada to face Canadian justice," Arar said.

Arar launched a complaint in 2005 with the RCMP seeking the prosecution of Salloum, Arar said.

"Since I launched my complaint in 2005. I gave the RCMP investigating team, during the many interviews I had with them, the information they needed to advance their investigation."

Mazigh said the criminal charge against Salloum was a vindication.

"People wouldn't even admit he was tortured," she said. "This is a clear message to my husband — and to whoever denied that torture happened — that this is real and that you cannot commit torture [with] impunity.

"It is symbolic, but at the same time, it is personal." 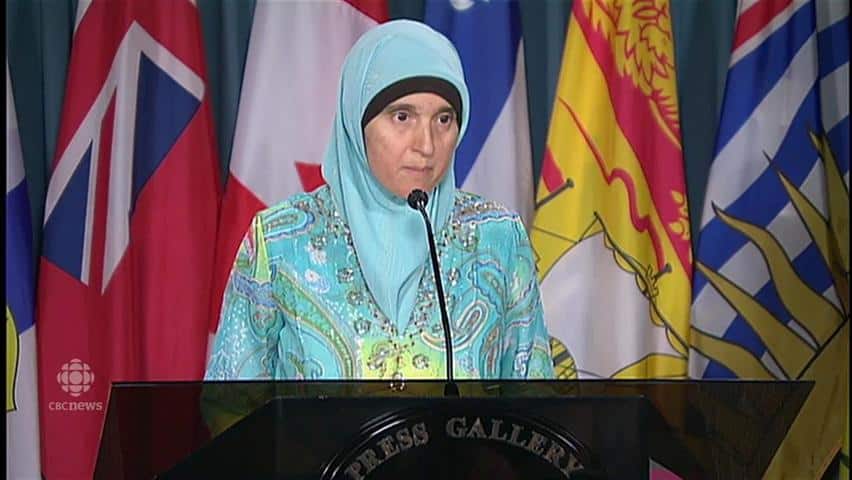 Maher Arar statement on RCMP charges being laid against his torturer

5 years ago
2:46
Monia Mazigh, the wife of Maher Arar reads a statement from her husband Maher Arar after the RCMP lay criminal charges against one of his Syrian torturers. 2:46

Champ described the charge as "groundbreaking and historic," adding that "it is critical for a family who have long struggled for justice"

​It is unclear whether Salloum could be located in Syria, a country beset by a civil war and warring factions.

Arar, an engineer, was the first of a handful of foreign-born residents in North America who faced travel restrictions or deportation following 9/11. His was one of the highest profile cases of the illegal rendition of suspects to foreign countries by the CIA.

In 2002, Arar was coming back from a vacation to Tunisia when he was arrested during a stopover at New York's John F. Kennedy International Airport. American authorities suspected him of involvement in the al-Qaeda network.

The CIA then deported him to Syria — even though he was carrying a Canadian passport. He wound up in a dungeon-like Damascus prison cell, where he was tortured.

He was returned to Canada a year later, and after political pressure on the then-Liberal government, a public inquiry into his deportation was launched. He accused American officials of sending him to Syria knowing that the country practised torture — and said Canada was complicit in his torture because the CIA was relying on information about him supplied by the RCMP.

Justice Dennis O'Connor, the commissioner of the inquiry, found that the RCMP, in its communication with the U.S. officials, characterized both Arar and his wife, as "Islamic extremist individuals suspected of being linked to the Al Qaeda terrorist movement."

O'Connor said this "false and inflammatory information" very likely led to the CIA's move to deport Arar to Syria.

In 2007, Arar received a $10-million settlement from the Canadian government. He also received an official apology from Prime Minister Stephen Harper.