Canadian Prime Minister Justin Trudeau is leaving Paris with a concrete guarantee that France will proceed with ratification of the Canada-European Union Comprehensive Economic and Trade Agreement (CETA) this summer.

Canadian Prime Minister Justin Trudeau is leaving Paris with a concrete guarantee that France will proceed with ratification of the Canada-European Union Comprehensive Economic and Trade Agreement (CETA) this summer.

"We will launch ratification as soon as possible," said French President Emmanuel Macron following a bilateral meeting between the two leaders Friday.

It was left to Trudeau in his remarks to spell out the timeline, which will apparently see the trade agreement given first reading by summer.

This is the second time he has made such a promise. Macron had initially pledged to move forward on ratification by end of 2018.

Still, it is a step forward.

The question, however, is whether Macron has the support to push it all of the way through the legislative process.

Macron is in a delicate political position with the country routinely rocked by protests. France is the bedrock of the yellow vest protest, now a global movement mainly against high living costs.

Opposition to CETA is particularly strong among nationalists and euro-skeptics.

The deal is in place in a provisional manner. Armed with new studies that show France is getting the better end of the bargain — at least for the present — Macron appears confident of putting the deal before Parliament and winning the ratification fight.

Trudeau, for his part, welcomed the plan for full ratification, calling it "excellent news for Canada and France." 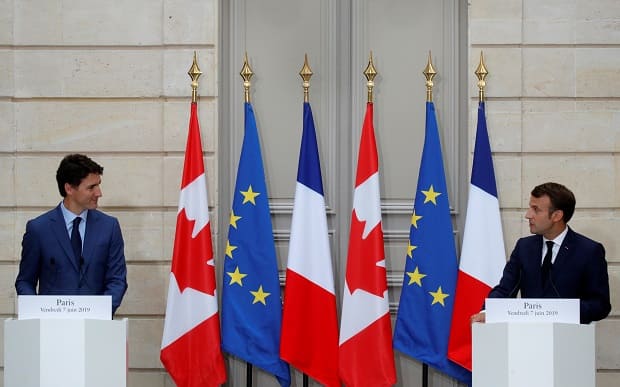 While CETA was provisionally applied in 2017, a small number of its measures — including investment protection provisions — were not brought into effect.

Weathering a heated debate and growing pressure, the European Commission decided to treat CETA as a "mixed agreement," meaning ratification required not only a vote in the European Parliament, but a successful ratification process in each of the 28 member states.

The massive deal drops or phases out nearly all existing tariffs and grants new market access for a wide range of products, including agricultural commodities.

Trudeau's meeting with Macron marks the end of his three-day visit to Europe, primarily to commemorate the 75th anniversary of D-Day.