With little fanfare, the Senate of Canada voted today to suspend Lynn Beyak for the remainder of this parliamentary session because she failed to complete the anti-racism training she was directed to undergo the last time she was temporarily kicked out of the Red Chamber.

With little fanfare, the Senate of Canada voted today to suspend Sen. Lynn Beyak for the remainder of this parliamentary session because she failed to complete the anti-racism training she was directed to undergo the last time she was temporarily kicked out of the Red Chamber.

The Senate agreed, on a voice vote, to adopt the ethics committee's latest report on Beyak, which calls for her suspension from the chamber so she can complete the prescribed training and take time to think about the harm she did to Indigenous people by posting racist letters on her website.

There was no standing vote; the report was adopted "on division," meaning there was some opposition in the chamber.

This latest suspension comes two days after the senator formally apologized in the upper house. For years, Beyak has insisted she did nothing wrong in posting the letters to her Senate webpage, but she conceded Tuesday that her actions were "ill-considered."

"I would like to unreservedly apologize for my actions," she said. "Because of my belief in free speech, my initial instincts were to leave the letters on the website. After long and careful consideration, I now regret not insisting on their removal." 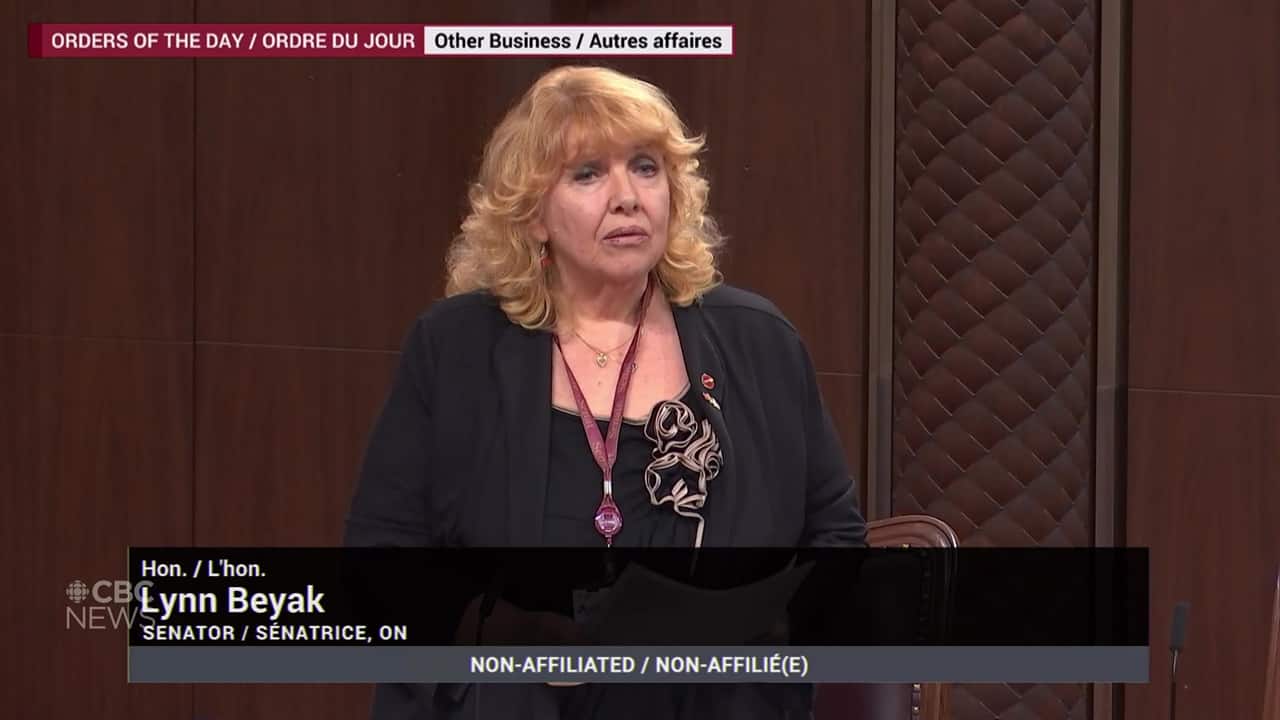 1 year agoVideo
3:28
After insisting for years that she did nothing wrong, Ontario Sen. Lynn Beyak told her colleagues in the upper house she 'unreservedly' apologizes for posting racist letters to her Senate website. 3:28

The Senate's internal economy, budgets and administration (CIBA) committee met Thursday to formally remove her from the Senate payroll.

The ethics committee stipulated that, for the duration of her suspension, Beyak should not receive any remuneration or reimbursement of expenses, including any sessional or living allowances, and that she be denied access to Senate resources — including office space.

"CIBA is moving forward without delay to implement its required action," a spokesperson for that committee said.

In January, the ethics committee recommended Beyak be suspended for a second time because it concluded that she had not adequately addressed the underlying issue that led to her initial suspension: that she doesn't understand the pain she caused by describing Indian residential schools in positive terms and by posting racist letters to her website defending her position.

While recommending a second suspension, the committee did lay out another path forward for Beyak to return to the chamber.

The committee has directed the Senate Ethics Officer to "identify and approve ... an educational program provider with demonstrated experience in race relations" to provide Beyak with training.

A number of senators from the Canadian Senate Group (CSG), a caucus of former Conservative and conservative-minded senators created late last year, sought to delay a vote by sending the Beyak report back to the ethics committee for further study.

CSG Sen. Josée Verner sought to adjourn debate Tuesday on the report. Then, CSG Sen. Robert Black introduced a motion that would have resulted in more study of Beyak's conduct and the committee's remedial measures. Those efforts were defeated by a majority of Independent and Progressive senators.

"Sen. Beyak has unequivocally accepted the recommendations of the report by the Senate's Ethics and Conflict of Interest Committee, so there should be no further delay in voting on it," Woo said.

In a media statement Thursday, CSG Sen. Scott Tannas, the interim leader of the caucus, said he has concerns about the ethics committee's timeline for Beyak to complete her anti-racism training.

The committee report says Beyak must attend, at her own expense, "education programs related to racism toward Indigenous peoples" at a facility chosen by the Senate ethics officer (SEO) within 30 days of today's vote.

Then, within 15 days of the end of her training, the centre must report back to the committee, through the SEO, on "Beyak's attendance and performance at the educational programs."

"I and other senators still have serious concerns about the lack of clarity around the guidelines and tight timelines recommended by the committee for completing any educational program for Sen. Beyak. And there is no definition of what constitutes success," Tannas said.

Tannas chastised Woo for his comments about the CSG's efforts to delay the vote.

"These were not games. This is a legitimate concern over fairness and process," Tannas said.

"Given the concerns voiced this week by some senators, both publicly and privately, it is my hope that those charged with the responsibility to create the required education program will work in good faith to deliver an appropriate, fair and focused program, and to do so in a timely and transparent way."

The letters Beyak posted to her webpage were sent to her after CBC News reported on comments she made about the Indian residential school system in March 2017.

Beyak praised the "well-intentioned" instructors at these schools and chastised the Truth and Reconciliation Commission for not "focusing on the good" coming out of these institutions.

She also grilled residential school survivors about their time at the schools during a Senate committee meeting.

In the months that followed, she posted some of those letters to her official Senate webpage and refused to retract her comments. One letter posted on Beyak's website said Indigenous people "should be very grateful" for residential schools. Other letter writers used inflammatory language and stereotypes to describe Indigenous people and their history.

Beyak was suspended and sent to anti-racism training last fall — but she was asked to leave after her first lesson. Instructors at the Ontario Federation of Indigenous Friendship Centres said her "inflexibility and conduct made the learning environment unsafe."