The federal Liberal government is promising $53 million to help Venezuelans caught in a burgeoning refugee crisis, as Canada plays host to its Lima Group allies in Ottawa Monday.

The federal Liberal government is promising $53 million to help Venezuelans caught in a burgeoning refugee crisis, as Canada plays host to its Lima Group allies in Ottawa Monday.

"Canada is stepping up ... to address the most pressing needs of Venezuelans on the ground, including the almost three million refugees," Prime Minister Justin Trudeau said during his opening remarks at the summit in Ottawa.

Canada has earmarked the new funds to help those Venezuelans who have fled to neighbouring countries in recent months due to an increasingly acute food shortage. The $53 million is in addition to the $2.2 million Canada has pledged already for similar efforts to help people grappling with the largest refugee crisis ever recorded in the Americas.

Trudeau said the money would be distributed to "trusted partners" in the region to "help them support Venezuela and Venezuelans."

The regime of authoritarian leader Nicolas Maduro has denied there is widespread food insecurity in Venezuela, and has instead blamed the U.S. Central Intelligence Agency (CIA) and smugglers for what the government describes as localized supply problems.

Independent observers pinpoint the Maduro administration's socialist price control policies, its restrictions on foreign currencies (the U.S. dollar, mainly) and a dramatic drop in domestic food production for widespread hunger in Venezuela, once one of the richest nations in South America.

Canada's International Development Minister Marie-Claude Bibeau said Monday there are "huge issues with having access to basic supplies. So many people are leaving the country. I'm very concerned about that." 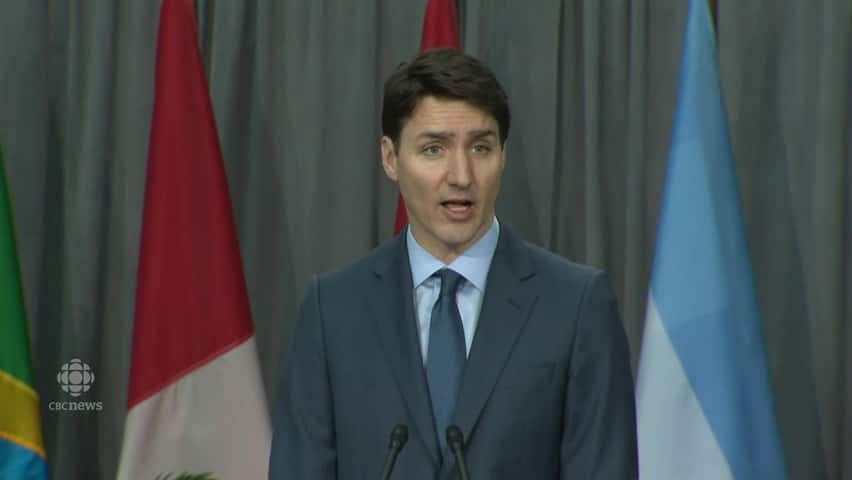 Foreign ministers from the Lima Group countries — Canada, Argentina, Brazil, Chile, Colombia, Costa Rica, Guatemala, Guyana, Honduras, Panama, Paraguay, Peru and Saint Lucia, along with a handful of representatives from other nations, such as the United Kingdom — have convened in Ottawa to discuss further support for Venezuelan opposition leader Juan Guaido.

Guaido addressed the conference via videolink Monday, praising Canada and the Lima Group for their support while asking partner countries to redouble their diplomatic efforts to help loosen Maduro's grip on power.

"We are very close to reaching freedom, and that is the result of the international support we've received and the recognition of this process of respecting the rule of law and having a non-violent approach," Guaido said in Spanish.

"Unfortunately we're still under a dictatorship in Venezuela. That's why it's time to increase pressure."

To that end, Trudeau announced today he will formally recognize Guaido's chosen envoy, Orlando Viera Blanco, as the legitimate representative of Venezuela in Canada.

"For years now, we've witnessed the breakdown of democracy in Venezuela and a dictatorship willing to use force, fear and coercion to retain power," Trudeau said.

"The violation of human rights and the complete disregard for the rule of law shown by the regime has been both inexcusable and unacceptable."

Friday saw cracks emerge in the military's support for Maduro: Venezuelan Air Force Gen. Francisco Yanez switched his allegiance to Guaido and called on his fellow officers to do the same.

The U.K.'s representative at the Lima Group meeting, Minister of State for Europe and the Americas Alan Duncan, urged others in Venezuelan government and military circles still loyal to Maduro to turn their backs on him and make way for Guaido as interim president, for their country's sake.

"We've seen three million people flee. This wasn't caused by a famine or a hurricane. It was caused by the government mismanagement and kleptocratic approach of this dictatorship of Nicolas Maduro and his cronies," said Duncan.

"Maduro and his socialism are entirely self-discrediting. If anyone believes his management of the economy is in any way an example of how to go about it, then they need their heads examined." 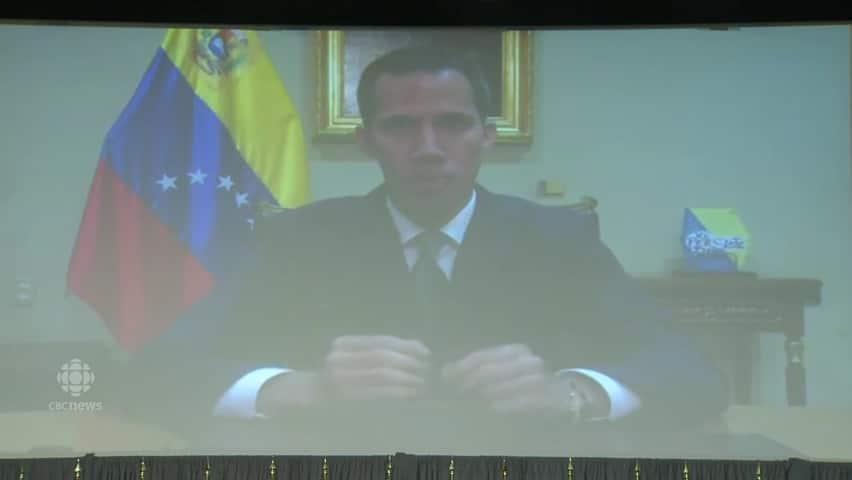 Protests have erupted across Venezuela since Maduro began his second term on Jan. 10. He was elected last year in a vote Canada, the U.S. and other nations deemed illegitimate.

Guaido has since declared himself interim president. Canada has joined the United States, the European Parliament and several Latin American nations in recognizing Guaido's claim. Russia and China — which have invested heavily in oil-rich Venezuela — support Maduro, as does Turkey.

Notably missing from the Lima Group attendee list is Mexico. Its new left-leaning president, Andres Manuel Lopez Obrador, has taken a stance different from that of his predecessor on Venezuela, going so far as to invite Maduro to his inauguration.

On Sunday, Trudeau's office said he spoke with Guaido about the need for countries to send a clear message about what the Prime Minister's Office calls "the illegitimacy of the Maduro regime."

Trudeau also brought up the Venezuelan constitution during a town hall in Milton, Ont., last week.

"This all seems very complex and complicated, and it is, but it is all grounded in human rights, the rule of law and Venezuela's own constitution," he said.

As authority supporting his claim to the presidency, Guaido cites Article 233 of the Venezuelan constitution, which gives temporary presidential power to the head of the National Assembly when the presidency is otherwise vacant.

But those looking for significant action following today's talks could be disappointed.

One of Canada's top former diplomats said the public shouldn't expect to see much more than a statement of principles coming out of the emergency meeting.

"I would expect there would be a declaration asking for movement forward, asking for continued respect for human rights and really putting it on the line that this interim president [Juan Guaido], as per the Venezuelan constitution, should be the one to step up and call for elections," said Peter Boehm, a longtime senior diplomat with postings to Cuba, Costa Rica and the Organization of American States.

With files from the CBC's Cat Tunney, Elise Von Scheel and Evan Dyer