The countries of the Lima Group completed their meeting in Ottawa on the crisis in Venezuela Monday — proclaiming the South American nation's opposition leader and its National Assembly as full members of the multi-nation group while ruling out military intervention to end the humanitarian crisis gripping the oil-rich nation.

The countries of the Lima Group completed their meeting in Ottawa on the crisis in Venezuela Monday — proclaiming the South American nation's opposition leader and its National Assembly as full members of the multi-nation group while ruling out military intervention to end the humanitarian crisis gripping the oil-rich nation.

The move elevates Venezuelan opposition leader Juan Guaido to the status of a "fully fledged" member of the group, said Foreign Minister Chrystia Freeland. The move further sidelines the authoritarian government of Nicolas Maduro, which has been declared illegitimate by Canada and many of its allies. 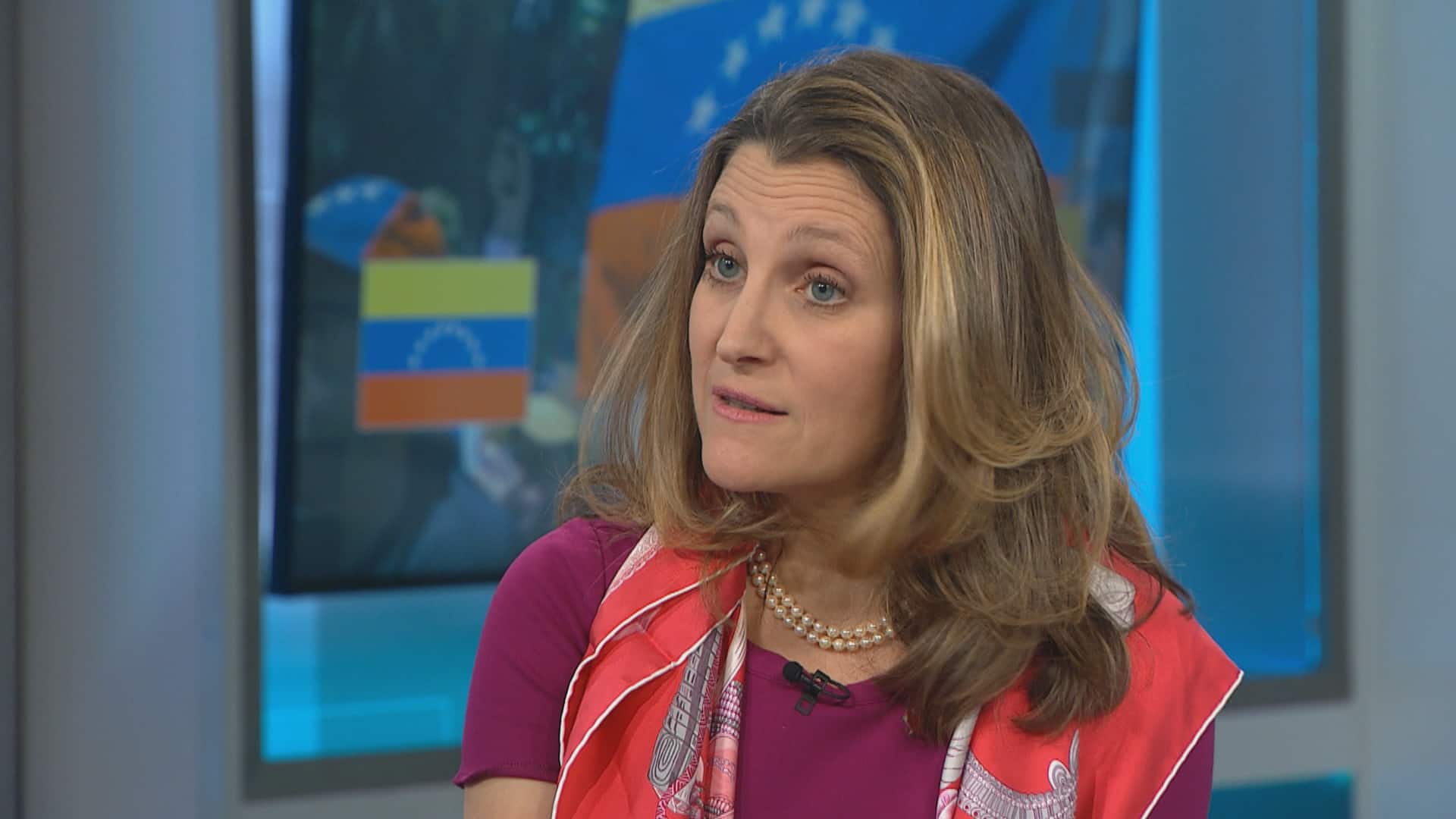 2 years ago
14:13
'I think what history shows is once a leader of an authoritarian regime discovers there are no alternatives, that is when you see democracy restored,' says Freeland. 14:13

"It is very important to understand that Guaido derives his legitimacy from the National Assembly, which is the sole remaining democratically constituted body in Venezuela," Freeland said at the closing press conference of the Lima Group meeting.

Foreign ministers from the Lima Group countries — Canada, Argentina, Brazil, Chile, Colombia, Costa Rica, Guatemala, Guyana, Honduras, Panama, Paraguay, Peru and Saint Lucia, alongside representatives from the U.K, the EU and the U.S. — met in Ottawa Monday to further solidify support for Guaido as protests over the legitimacy of Maduro's government continue to fill the streets in Venezuela.

The Lima group wrapped its meeting Monday with a 17-point declaration that included a call for the "national armed forces of Venezuela to demonstrate their loyalty to the interim president in his constitutional functions as their commander in chief."

That call followed news on Friday that Venezuelan Air Force Gen. Francisco Yanez had switched his allegiance to Guaido and had called on his fellow officers to do the same.

The Lima Group nations did not encourage any military action against the Maduro regime, however, saying that the countries making up the group "reiterate their support for a process of peaceful transition through political and diplomatic means without the use of force." 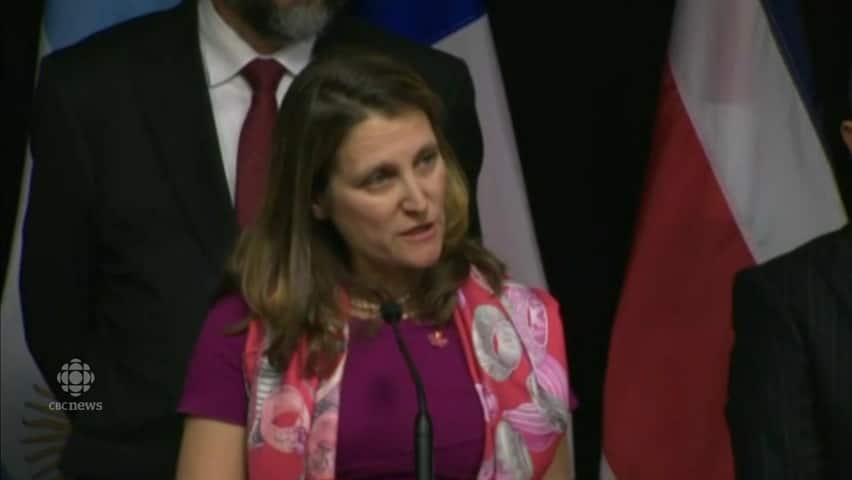 A second five-point statement was issued by the Lima Group nations joined by observer nations such as the U.S., which attended the Ottawa meeting.

That second, shorter, statement called for a "peaceful resolution" to the crisis and the "holding of free and fair elections" but did not address the use of force as an option to deal with the Maduro regime.

U.S. President Donald Trump told American media over the weekend that his administration still isn't ruling out the option of a military response to the situation in Venezuela.

The 17 points in the Lima Group's primary statement included condemnation of human rights violations in Venezuela and a statement singling out the country's security forces, "which have caused many deaths, injuries and detentions."​

The group also called on the international community to act, asking the United Nations and its agencies to prepare and provide humanitarian assistance to vulnerable people in Venezuela. The group asked for international partners to halt financial and business transactions by the Maduro regime globally. 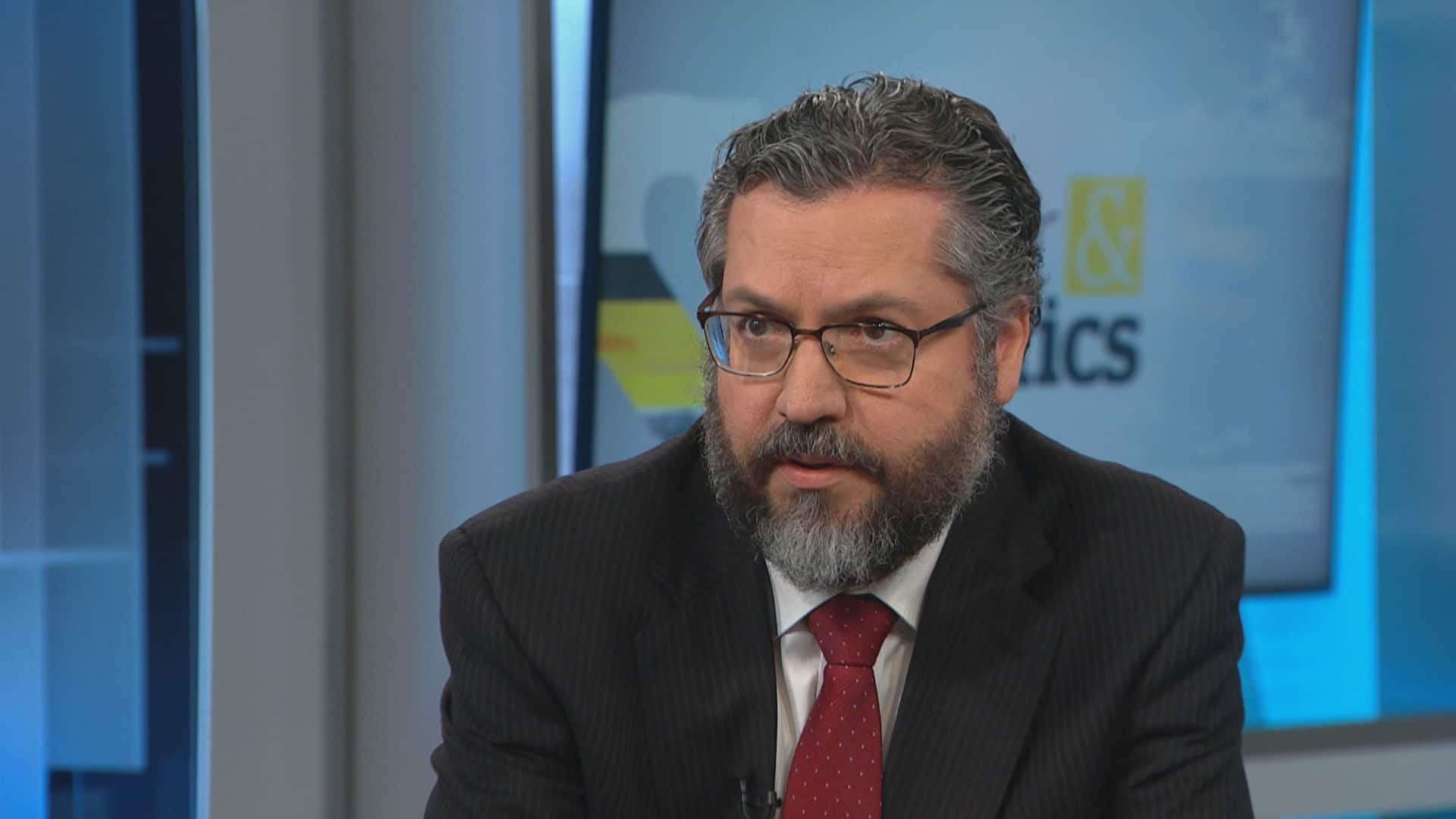 2 years ago
6:58
'The international community won't stand for any other solution than democracy,' says Min. Ernesto Araujo. 6:58

The countries were also in agreement in their call for the immediate re-establishment of democracy in Venezuela through free and fair elections, with international monitors to ensure they are legitimate.

The group also urged the Maduro regime to restore full freedom of the press and end censorship of the media in Venezuela.

That call came as both Venezuela and Russia called out Canada for denying media accreditation to state-owned media outlets from both countries seeking to attend the closing press conference of the Lima Group meeting in Ottawa.

Venezuela's state owned media, teleSUR, posted a screen-capture image on Twitter of an email from Global Affairs Canada informing the outlet that it had not been accredited to attend media events surrounding the meeting.

A Canadian government official speaking told CBC News that teleSUR was not granted access because it is a state-sponsored propaganda outlet.

The Russian embassy in Ottawa issued a statement condemning the move, along with Canada's decision not to accredit Russian news outlets Sputnik, RIA and TASS.

"Canada should stop restricting journalists from reporting freely without obstruction or reprisal and must apply to itself the same rules and standards it demands from others to follow," the statement said.

President of the Canadian Parliamentary Press Gallery Philippe-Vincent Foisy, a Radio-Canada reporter, told CBC news that ITAR-TASS is an accredited member of the gallery and the failure to accredit the outlet was a source of concern.

"The gallery will be seeking explanations from [Global Affairs Canada] to safeguard the access expected for gallery members. If ITAR-TASS was indeed denied accreditation ... it is problematic," he said.

"I would note that Canada could set an example for all by embracing access to reporters even from state press agencies or others they don't necessarily agree with, as long as there are no security concerns." 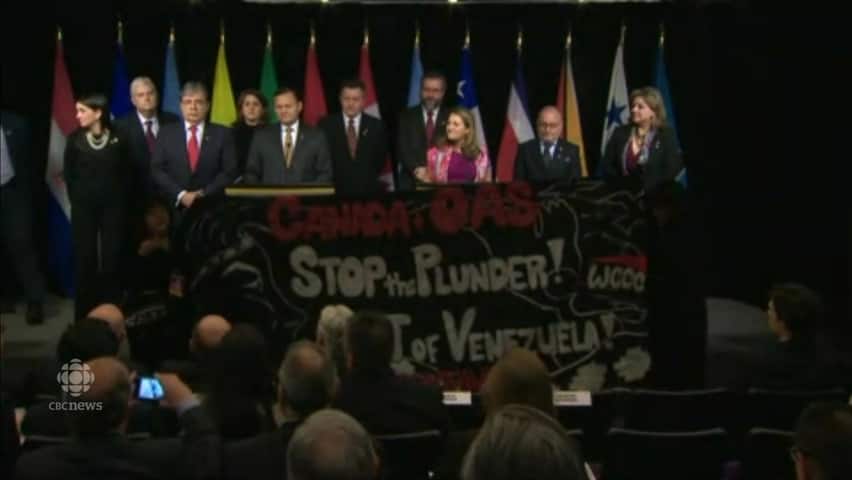 During the closing press conference, a small group of pro-Maduro protesters held up a banner and began chanting, "Hands off Venezuela," before being ushered from the room.

Those protesters appeared to be wearing official media accreditation for the event.

Once the protesters were removed, Freeland told reporters that Canada's support for Guaido, and that of the Lima Group, is a recognition in part of the right to democratic expression — including the right to protest.