Liberal Leader Justin Trudeau has rolled out a spate of big policy announcements this week that have been noticeably short on  details — which leaves him room to manoeuvre as the campaign evolves, but also makes it difficult for voters to assess what the promises might mean.

Liberal Leader Justin Trudeau has rolled out a spate of big policy announcements this week that have been noticeably short on  details — which leaves him room to manoeuvre as the campaign evolves but also makes it difficult for voters to assess what the promises might mean.

The lack of specifics is compounded by the fact that, so far in this campaign, the Liberals have not been releasing costing data prepared by the Parliamentary Budget Officer for their big-ticket promises, instead saying they will release all the costing later when voters can see how all the measures fit together.

The question is: Will voters notice?

"That might be part of the calculus," said Paul Adams, a professor of journalism at Carleton University and a former political correspondent.

"(The Liberals) may not want to be bound by that fiscal framework this early on. (Holding off) gives them the flexibility to add stuff as the campaign goes on and gives them room to ad lib if they need to," says Adams.

David Herle, who was national campaign chair for the Liberal party in 2004 and 2006, said when it comes to campaign promises there is a fine line between giving too much detail and not enough.

"They need to give as much detail that it's convincing; they need to be to be credible," said Herle, now a principal partner with the Gandalf Group, a public opinion and research firm — but, he added, not so much detail that any debate is about the specifics rather than the overall goal or promise.

Herle gives the example of Paul Martin's 2006 Liberal campaign — which Herle ran —that got sidetracked when child-care advocates didn't think the money Martin attached to his child-care plan was enough. The debate became about that, rather than a comparison of Martin's plan to Stephen Harper's plan, which was no plan at all.

"Your worst problem can come from the stakeholders that should be supportive," he says.

Yet, Herle said that is not an excuse for the current Liberal campaign team.

"Some of the recent announcements have been thin enough that it seems they might have been put out earlier than they were originally planned."

One of the policy announcements without a lot of detail has been Trudeau's pharmacare promise. It's not clear who would be covered. Will those with private insurance be exempt? Will it be means-tested to apply only to those under a certain income? Trudeau has said it requires negotiation with the provinces and territories. And Liberals say they are reluctant to give too much away before those talks begin.

Herle said that severely limits the potential impact of the policy, because it fails to mobilize a group of voters, particularly those who are not insured and can't afford medication, who would be motivated by being told, "if we get elected, you get free drugs."

Another example, is the Liberal promise to prohibit "military-style," semi-automatic rifles. They've said that ban would include the AR-15, which has been implicated in many mass shootings in the United States. But what other types of firearms would be included is not clear, meaning gun owners will have to wait and see what the Liberals, working with the Canadian Firearms Program, come up with, if re-elected.

Adams said the problem with a lack of precision in the moment means it's more difficult for Canadians to assess what's eventually delivered as to whether it matches what was promised.

The Liberals also say they will work to reduce Canadians' cellphone bills by 25 per cent. When asked how, Trudeau pointed to increased competition. In a separate interview, Innovation Minister Navdeep Bains, who is running for re-election, said the Liberals would make it easier for competitors to enter the market and give the CRTC, which regulates the telecom industry, the "tools" to force telecoms to reduce bills.

There was no answer on what happens if the CRTC doesn't use those tools or what the repercussions would be if the 25 per cent reduction doesn't happen.

Herle points out that cellphone costs could be a big issue in an election that is all about affordability — and the Liberal promise is a missed opportunity.

"The thinness of the Liberal policy makes a voter wonder whether that their cell bill will actually come down."

And Trudeau's tendency to sidestep questions or answer with general talking points does not help create clarity. And it is those answers, broadcast and published, that voters are relying on to understand where the parties stand.

After his pharmacare announcement on Monday, Trudeau was asked multiple times by reporters about who exactly would be covered by the program and who would not. This is what Trudeau said in one of his answers:

"We need to move forward in making sure that everyone has access to the medications they need." 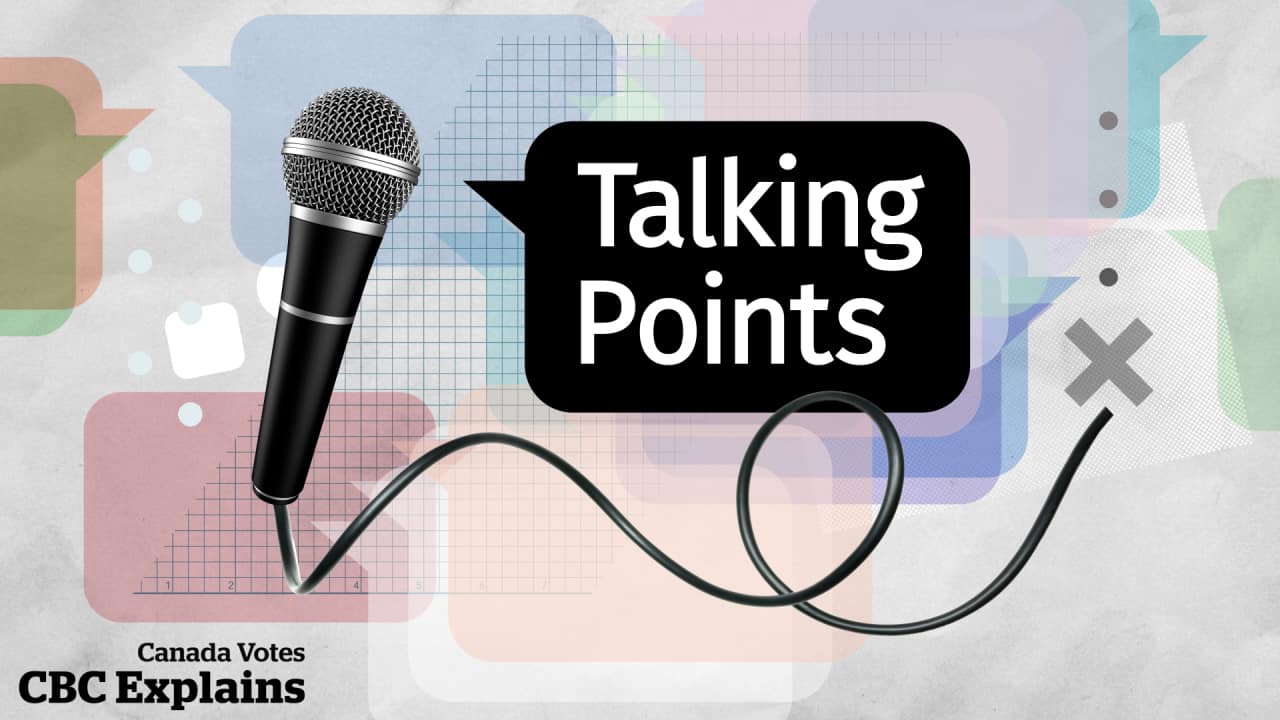 Politicians say the same things over and over: Here's why

1 year ago
7:32
Talking points are a public relations tool used by politicians and parties at every level. The intention is to keep politicians on track and ensure the party message sinks into the public consciousness, but some experts say sticking too close to a talking point risks losing the message entirely. 7:32

Trudeau and his team say a re-elected Liberal government would follow the principles of Eric Hoskins's expert report on pharmacare, which recommended a single-payer, universal system with small co-payments for people not on social assistance. The report estimated the annual cost at $15 billion.

But when asked if that's what he envisioned, Trudeau would not commit. And in talking with Liberal officials, it's clear they will be using the report as guidance only, not as an exact script to follow.

The Liberals argue that they can't prescribe what the final system would look like and what the cost would definitively be because that still has to be negotiated with the provinces and territories.

And they insist it's because they won't be specific at this point that makes them more trustworthy than their opponents to deliver.

"The Liberal Party is the only party with a realistic plan to ensure no Canadian is forced to choose between putting food on the table and getting the medicine they need," said Cameron Ahmad, spokesperson for Trudeau.

Not alone on pushing off specifics

The latest announcement to be short on specifics is the promise to exceed Canada's 2030 greenhouse gas emission reduction targets and to get Canada to net zero emissions by 2050.

"The bigger the promise, the more detail you need to give of how you're going to do what you say," says Herle. "If they don't put more meat on the bones, it may be seen as aspirational rather than real climate change policy."

Ottawa Centre Liberal candidate Catherine McKenna, Trudeau's environment minister, said in her part of the announcement Tuesday that an expert panel will help them figure out how to reach the goals. But first, she said, they had to "get through" this election.

Of course, the Liberals are not the only ones capable of imprecision.

"It's the same issue as (Conservative Leader) Andrew Scheer with his climate change plan," said Adams. "It's a lot of hope, prayer, sticky tape and binding twine to keep it all together."

And both the NDP and the Greens have raised eyebrows and drawn criticism for very concrete, specific promises without a clear plan on how they would be achieved or paid for, other than by raising corporate taxes and taxes on the very wealthy.

"I love the ideas of universal pharmacare and free dental care, but a significant level of detail is needed to convince me," said Herle. "Otherwise it's pie in the sky."

But for the Liberals, who came into this election on the heels of the SNC-Lavalin scandal only to be hit with Trudeau's blackface controversy a week into the campaign, there could be particular dangers in being perceived as vague when making promises.

"The danger for them is right now they have a credibility problem with Trudeau, because of SNC, because of blackface," said Adams. "Any vagueness feeds into the opposition line that he's not as advertised, that people can't trust him."