The Liberal government introduced legislation today that will begin the process of bringing Canadian law into alignment with the United Nations Declaration on the Rights of Indigenous People (UNDRIP).

The Liberal government has introduced legislation that will begin the process of bringing Canadian law into alignment with the United Nations Declaration on the Rights of Indigenous People (UNDRIP).

Justice Minister David Lametti, who tabled Bill C-15 in the House of Commons today, said the bill would chart a path forward for implementing the individual and collective rights set out in the declaration.

"Working with First Nations, Inuit and Métis peoples to implement the declaration and create a framework to achieve its objectives is a statement that the Government of Canada values, respects and promotes the human rights of all, and not just some," said Lametti at a press conference alongside Indigenous leaders.

"The legislation is a significant step forward on the shared path to reconciliation for Indigenous and non-Indigenous peoples alike."

If passed, the bill would require the federal government to ensure that the laws of Canada are consistent with the declaration's 46 articles.

The bill also would require the federal government to prepare an action plan within three years of the bill's passage to achieve the declaration's objectives, and to table an annual report detailing progress made. 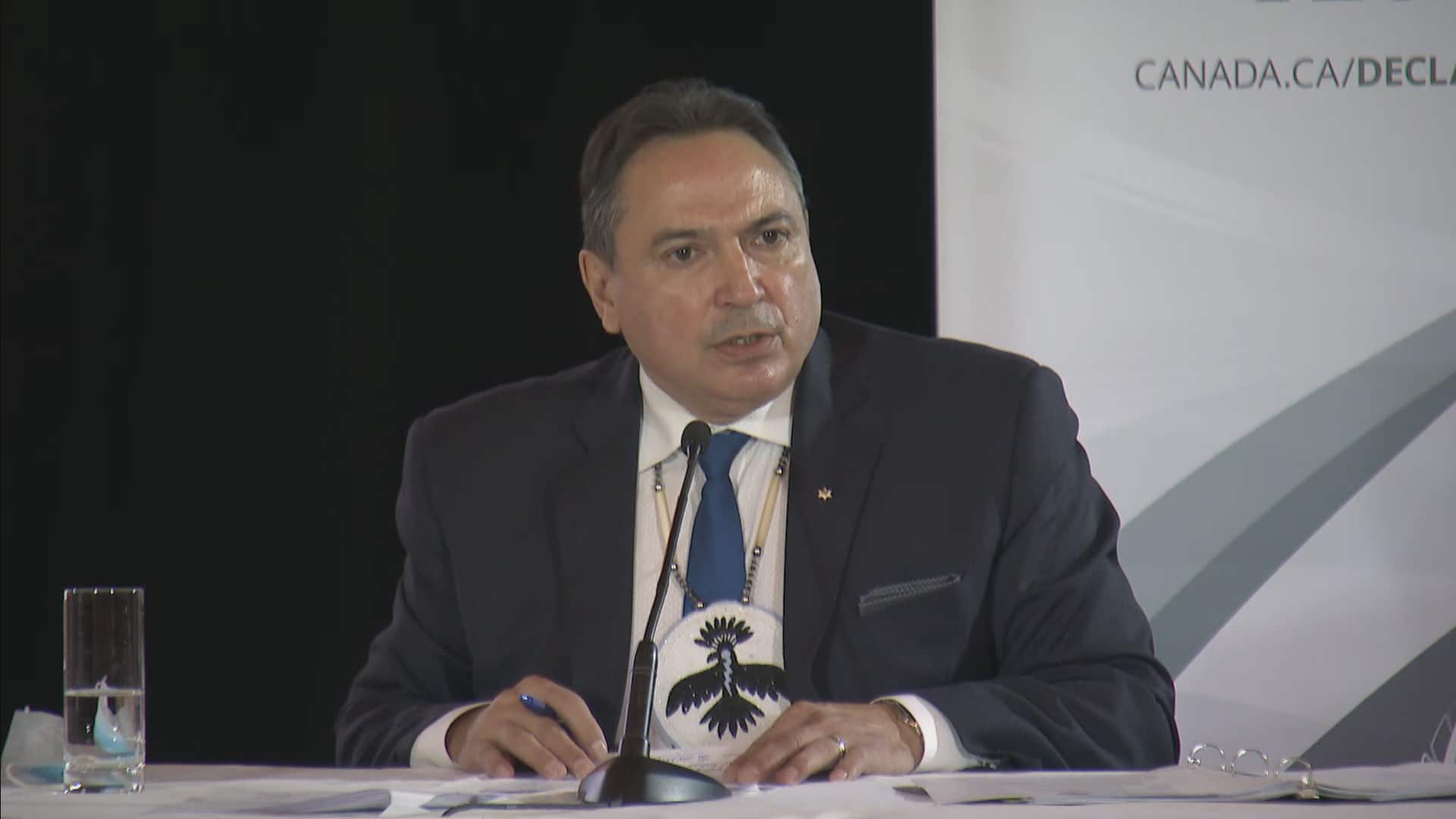 2 months agoVideo
1:06
Assembly of First Nations Chief Perry Bellegarde praised the introduction of legislation to implement the United Nations Declaration on the Rights of Indigenous Peoples. 1:06

A step forward for reconciliation

UNDRIP was passed by the UN General Assembly in 2007. It affirms the rights of Indigenous peoples to their language, culture, self-determination and traditional lands. It also establishes "minimum standards for the survival and well-being" of Indigenous people, according to the UN.

Crown-Indigenous Relations Minister Carolyn Bennett said the government bill is a response to the Truth and Reconciliation Commission and the National Inquiry into Missing and Murdered Indigenous Women and Girls. Both called for municipal, provincial and federal governments to fully implement and comply with UNDRIP.

"We have a responsibility as a country to ensure that Indigenous rights are affirmed [and] that they are fully understood and respected," said Bennett.

At a technical briefing for reporters — held on the condition that the officials involved not be identified — a senior government official said the bill is not written to make UNDRIP a part of federal law, but instead identifies the declaration as a human rights instrument that governments and courts can use to guide the development and interpretation of Canadian law. 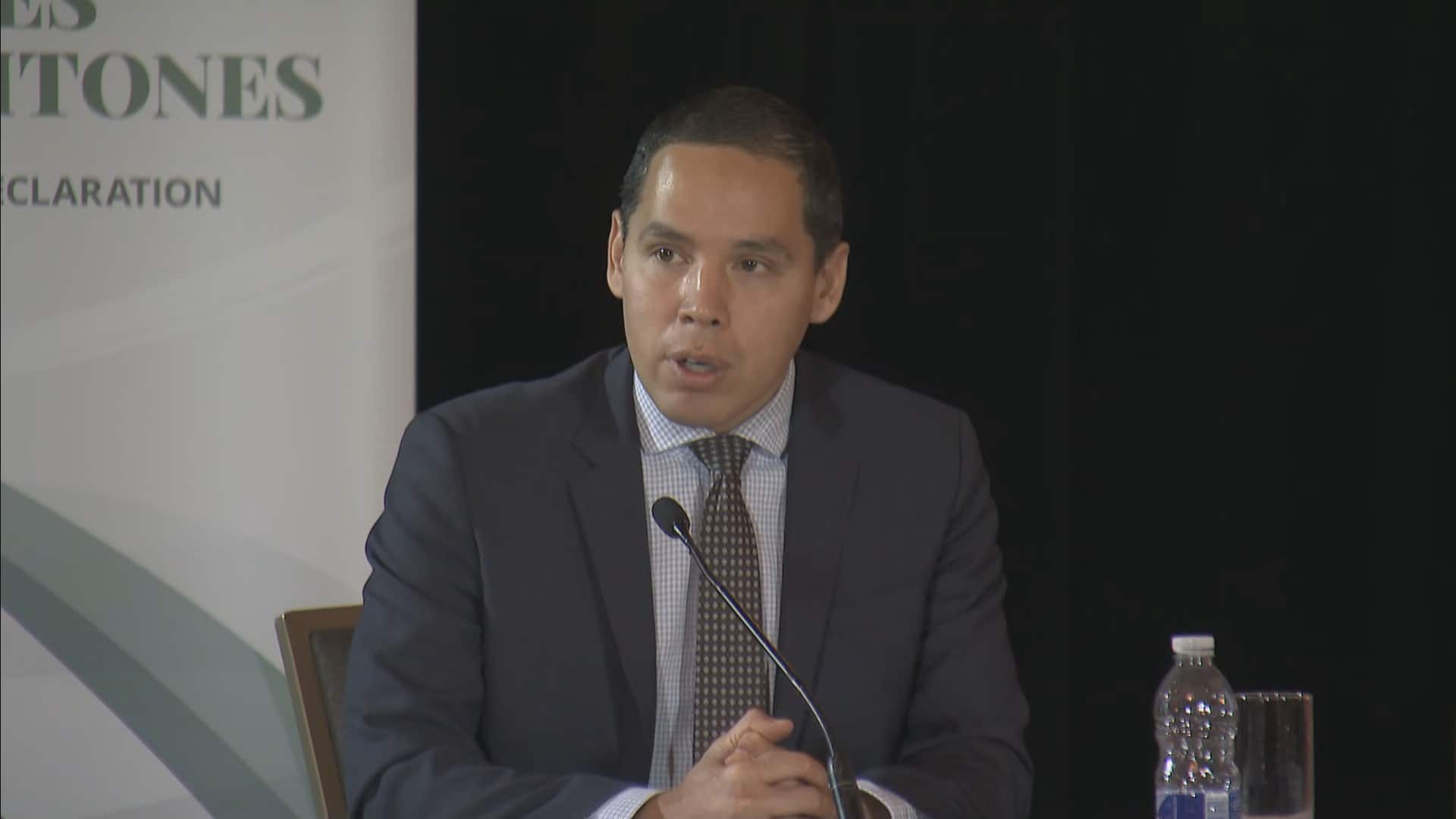 Natan Obed, president of Inuit Tapiriit Kanatami, said implementing UNDRIP is an important step toward ending discrimination against Indigenous peoples because it recognizes their distinct status and rights.

"It marks a positive departure from the past position of segregating our human rights into an imagined, separate underclass of rights," said Obed.

Assembly of First Nations Chief Perry Bellegarde praised the introduction of the legislation. He also said the three-year timeline for tabling an action plan is too long.

Bellegarde urged MPs to make improvements to the bill through the legislative process — particularly by spelling out which government department would be responsible for UNDRIP's implementation, and by committing to a periodic review of the legislation.

By introducing the UNDRIP bill, the Liberals are fulfilling a promise dating back to 2016 — when Bennett announced Canada would officially renounce its objections to the declaration at the United Nations. The party pledged during the 2019 federal election to implement UNDRIP within the first year of a new mandate, but postponed tabling the bill earlier this year due to the rail blockade crisis.

Debate over meaning of consent

The proposed legislation is modelled on a private member's bill tabled by former NDP MP Romeo Saganash and passed by the House of Commons in 2018. That bill died when Parliament was dissolved before last fall's election after Conservative senators — warning it could have unintended legal and economic consequences — slowed its progress.

Opponents have argued that a clause in UNDRIP calling for "free prior and informed consent" from Indigenous people for projects on traditional Indigenous land could block resource development. When stalling Saganash's bill, Conservative senators said they feared the legislation would grant Indigenous peoples a veto over such projects.

Lametti and the Indigenous leaders at Thursday's press conference pushed back against that idea.

"The word veto does not exist in the document," Lametti said.

David Chartrand, national spokesperson for the Métis National Council, said the claim that Indigenous people seeking to be consulted on projects want to kill industry is being used as a "fearmongering" tactic.

"This is a blueprint for clarity," said Chartrand. "This is a better example for industry to know ... full well when they're putting their money to something [that] it's got the backing of not only Indigenous governments, but also the federal, provincial and all parties involved."