Canada's most powerful cabinet minister says she will work to bring Canadians together at a time of profound global challenges and deep divisions at home over economic disparity.

Canada's most powerful cabinet minister says she will work to bring Canadians together at a time of profound global challenges and deep divisions at home over economic disparity.

Chrystia Freeland is taking on new roles as deputy prime minister and intergovernmental affairs minister. She's been tasked with building bridges as frustrations mount in Alberta and Saskatchewan over the federal carbon tax and a lack of progress on building a new pipeline. The Liberals were shut out of both provinces in the federal election.

Freeland said today that, having worked closely with Prime Minister Justin Trudeau on the government's biggest international file in its first term — drafting a new trilateral trade deal with the U.S. and Mexico to replace NAFTA — it's time now to channel her efforts toward challenges at home. 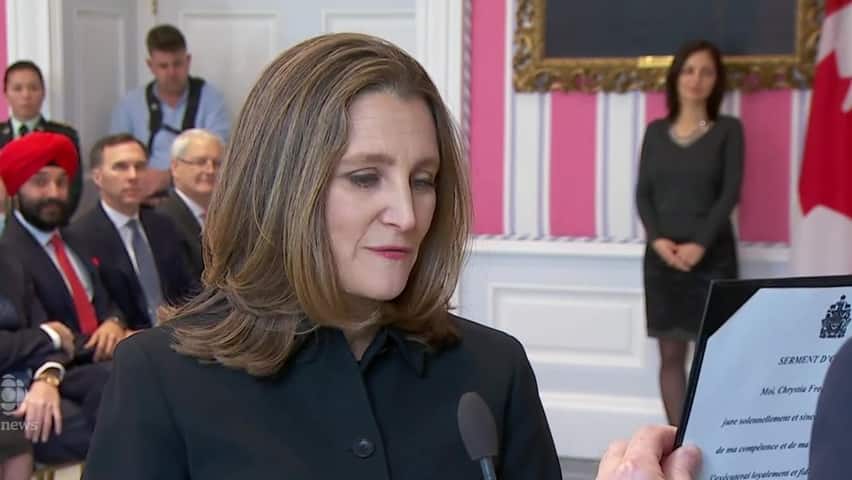 11 months ago
0:43
Chrystia Freeland is sworn in as the new Deputy Prime Minister as well as the new Minister of Intergovernmental Affairs, a key portfolio that will have to deal with some dissatisfied Premiers across the country. 0:43

Prime Minister Trudeau's new cabinet, unveiled today, is a 37-member team (including the prime minister) that includes 10 ministers from Quebec and another 11 from the Greater Toronto Area. He brought seven new faces to the table and tweaked the machinery of government to tackle western alienation and focus on Liberal priorities such as fighting climate change, boosting the middle class and Indigenous reconciliation.

This is the first time Trudeau has named a deputy PM. The role comes with no formal duties but usually involves ceremonial functions — such as filling in for the prime minister during question period — and important policy roles.

Freeland will play a leadership role across the cabinet, working directly with Trudeau and other ministers on key federal-provincial issues such as energy and environmental programs, health and infrastructure. She also will continue to oversee Canada-U.S. relations and to shepherd the trilateral trade deal with the U.S. and Mexico past the finish line.

Trudeau said he has worked closely in the past with Freeland on files that are vital to the country.

"Our ability to work together on these issues that, quite frankly, touch on national unity, touch on energy and the environment, touch relations with all provinces in all regions of this country, is going to be an extremely important thing at a time when we see some very different perspectives across the country that need to be brought together," he said.

Freeland is just the tenth deputy PM in Canadian history. The last one was Anne McLellan under then-prime minister Paul Martin.

Jim Carr, who is receiving treatment for blood cancer, is stepping outside of cabinet to take on a new role as the prime minister's special representative for the Prairies. He is said to be tasked with acting as Trudeau's "eyes and ears" in the region, after the Liberals were shut out of Alberta and Saskatchewan in the recent federal election.

Two other people have been dropped from cabinet: Kirsty Duncan and Ginette Petitpas Taylor. Duncan has been named deputy House leader and Petitpas Taylor is the new deputy whip — roles which give them some responsibility for keeping the minority government's agenda on track.

Others were promoted for what were seen as strong performances during the Trudeau government's first term. Patty Hajdu will preside over the health portfolio as the government takes steps to bring in a national pharmacare program.

Bill Blair, who was in charge of border security and gun control, will take on the public safety ministry, a huge file that includes overseeing the RCMP, the Canada Border Services Agency, Corrections Canada and the Canadian Security Intelligence Service (CSIS).

Blair also will be tasked with delivering on campaign commitments to bring in more gun control measures, including a promise to ban assault-style rifles.

Trudeau is bringing new faces to significant roles. Marco Mendicino is the new immigration minister, Mona Fortier will be the minister in charge of the new portfolio of "middle class prosperity" and Marc Miller is taking on Indigenous services.

Miller called the relationship with Indigenous Peoples "exceedingly complex" but one that defines Canada as a nation. He said reconciliation is hard work that must be done in the background, not on Twitter or in front of TV cameras.

"We sometimes as elected officials want to brag about historic investments that we've made, but a lot of those investments are us making up for court decisions, making up for promises that we've broken," he said. "You can't run around claiming victory on these things. You have to quietly move forward and improve that relationship."

Two newly elected MPs also have been trusted with key cabinet posts: Anita Anand takes on the public service and procurement file and Steven Guilbeault is in charge of heritage.

Deb Schulte and Dan Vandal are joining cabinet as well — Schulte in the seniors portfolio and Vandal in northern affairs.

As reported earlier, François-Philippe Champagne is getting a promotion to foreign affairs.

Champagne said one of his first orders of business will be to represent Canada at the Nov. 22-23 G20 foreign ministers' meeting in Japan. He said he will raise the issue of the two Canadians detained in China with that country's foreign minister.

Champagne takes on the post as Canada works to pass the trade deal with the U.S. and Mexico, and to secure the release of Michael Spavor and Michael Kovrig, who have been detained by Beijing since December 2018.

While there are pressing challenges in the foreign affairs file, Champagne said there are also opportunities.

"Canada stands in the world as a beacon of stability, predictability and rule of law. I think this is appealing not only to people who want to come to live in Canada, but to investors. So my job is going to be making sure we keep as many relationships in the world," he said.

Trudeau is keeping a trusted hand on the wheel in the crucial finance portfolio, keeping Bill Morneau as minister.

On his way into the ceremony, Morneau said he will continue to ensure the economy is strong for all Canadians.

"It's very important for us to continue to improve conditions for Canadians across the country and we clearly want to deal with climate change, an issue that was talked about a lot in the campaign, and it's an important issue for a lot of Canadians," he said.

Jean-Yves Duclos is the new president of the Treasury Board, Bardish Chagger takes on the "diversity, inclusion and youth" file, Pablo Rodriguez becomes House leader and the government's Quebec lieutenant, Karina Gould goes to international development and Seamus O'Regan takes on the natural resources ministry.

Trudeau said that while he regrets that former Saskatchewan minister Ralph Goodale and former Alberta minister Amarjeet Sohi won't be at the table to represent those provinces, the new cabinet will represent all Canadians.

"I'm very excited today to be able to get down to work the way Canadians asked us to in this last election — to pull together the country, to focus on issues of economic growth for the middle class, to fight climate change and to keep Canadians and their communities safe," he said.

"That is our focus and this is the team to do that."

Jonathan Wilkinson, who takes on the challenging environment file, stressed his Prairie roots: he grew up, attended university and worked in Saskatchewan.

"Reaching out and having conversations with stakeholders in that province and in Alberta is something that I see as an important part of the role, in making sure that climate change is being addressed in substantive ways, but we're doing so in a manner that meets the concerns and the aspirations of all regions of this country," he said. 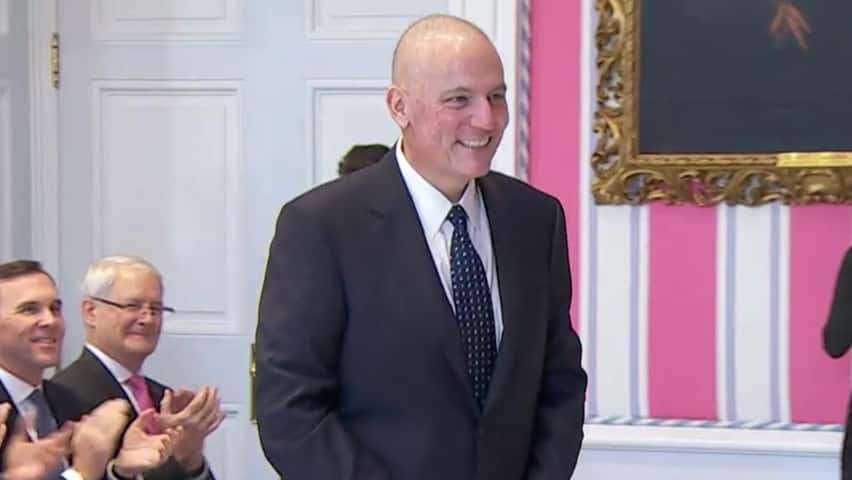 11 months ago
0:55
Dominic LeBlanc was named President of the Queen's Privy Council during the Prime Minister's cabinet unveiling today and received a standing ovation from his colleagues. LeBlanc is undergoing treatment for non-Hodgkin lymphoma, and stepped back from his cabinet duties during the last session of parliament.  0:55

Dominic LeBlanc received an emotional round of applause from the room as he was sworn in as president of the Queen's Privy Council and chair of the operations committee. Now recovering after cancer treatment, he arrived wearing a surgical mask due his compromised immunity.

On election night, he thanked supporters from hospital, where he received a bone marrow transplant after being diagnosed with non-Hodgkin's lymphoma, a type of blood cancer

The other people swapping ministries are:

And the ministers who are staying put include:

Mark Holland will remain in the non-cabinet role of chief government whip, while Kevin Lamoureux will serve as parliamentary secretary to the House leader.

Conservative Leader Andrew Scheer issued a statement soon after the new cabinet was announced, describing the new team as representing a lost opportunity for Trudeau to abandon his "reckless approach" to government.

"The cabinet he unveiled today is a bigger and more bloated version of the same one that helped create an affordability crisis for Canadian families, attacked our energy sector and put thousands of Canadians out of work, and set the stage for a national unity crisis," he said in a statement.

"Justin Trudeau has made it clear that he has learned nothing over the last four years. By appointing a known anti-pipeline activist and ministers who stood behind him while he passed job-killing, anti-energy legislation like Bills C-69 and C-48, Trudeau will only further stoke the divisions he created during the election campaign."

On Thursday morning, Trudeau meets in Ottawa with Calgary Mayor Naheed Nenshi, then Vancouver Mayor Kennedy Stewart. In the afternoon, he will hold his first cabinet meeting. Meanwhile, O'Regan will head west Thursday for meetings with Alberta government officials in Calgary.

Trudeau's first cabinet had 31 ministers, including himself. By the time Parliament was dissolved for this year's election, it had grown to 35 ministers.

All of Trudeau's ministers were re-elected in October except for Ralph Goodale and Amarjeet Sohi, who both lost their seats.