Liberal MP Greg Fergus spent much of last week speaking to black Canadians and community leaders after events left many in the community feeling traumatized. "Now we're seeing why it's important to do more," he says. "Racism kills."

'We always said we need to do more. Now we're seeing why it's important to do more,' says Greg Fergus

Greg Fergus spent much of last week in video conferences, talking to black Canadians and community leaders. The Liberal MP for Hull-Aylmer and chair of the parliamentary black caucus says many people are "traumatized."

But, he said, they also know that this moment is an opportunity for other Canadians to "finally see the systemic barriers that are in place here."

"Everyone says, I'm up and I'm down ...  I'm angry and I'm hopeful. It's an awful mix," he said in an interview. "And because we have attention on the issue, everybody's being asked about it. I'm happy to engage with this, but it's hard to engage with it, because it's overwhelming.

"We saw those brutal images of racism … and it triggers all those big and little things that every person of colour has been through."

On Friday, Fergus was beside Justin Trudeau when the prime minister attended the Black Lives Matter rally on Parliament Hill and kneeled along with many others in the crowd, the symbolically powerful gesture that has become a hallmark of the protests and rallies against anti-black racism that have followed the May 25 killing of George Floyd by police officers in Minneapolis.

Trudeau's participation was part of a week that will certainly be remembered as a significant moment in the history of protest against anti-black discrimination. But much now depends on what steps his government takes next. 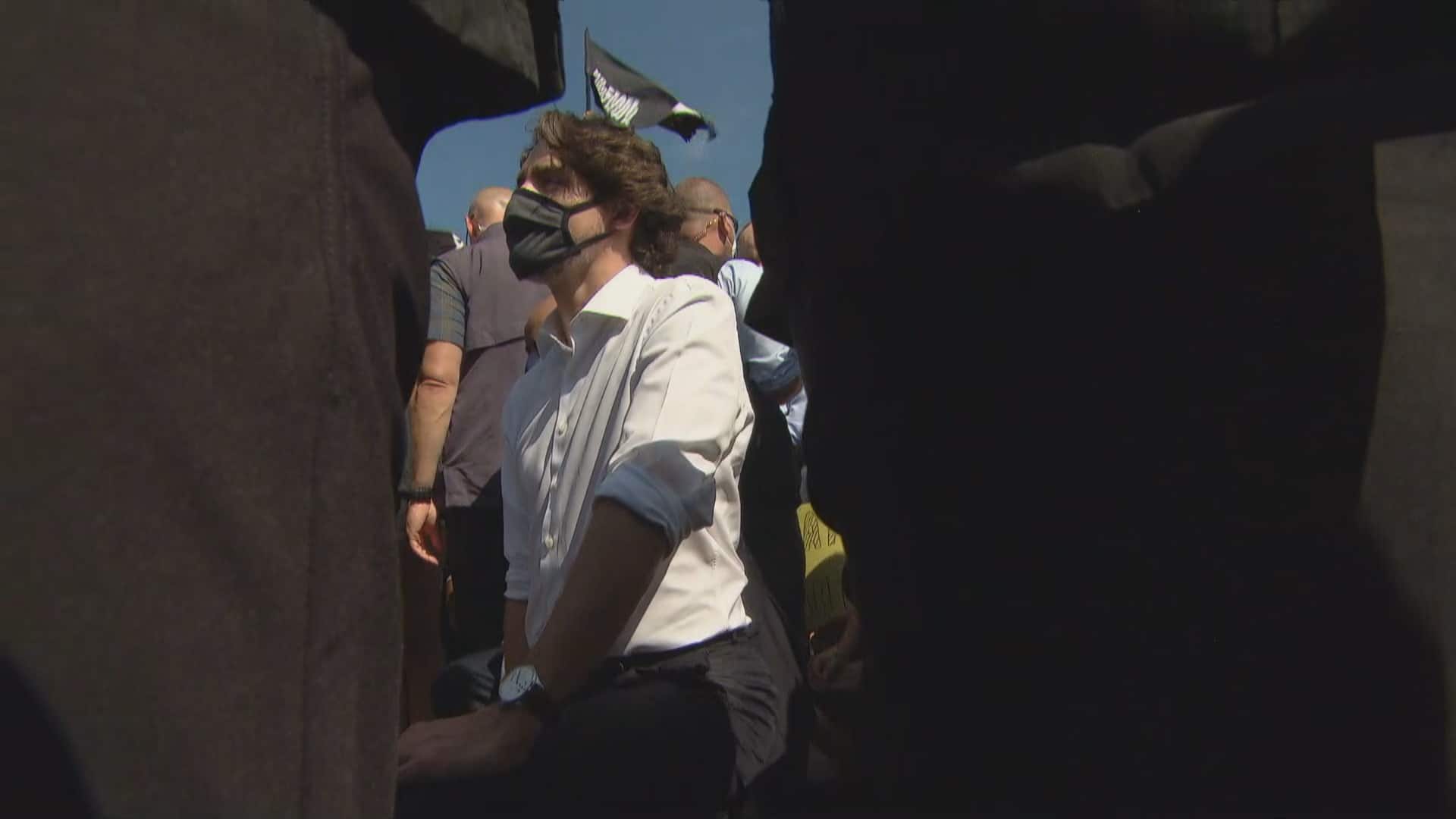 8 months agoVideo
1:47
Prime Minister Justin Trudeau made an appearance at an anti-racism rally on Parliament Hill in Ottawa Friday. He was met with chants of "Stand up to Trump!" from the crowd and kneeled for eight minutes and 46 seconds to remember George Floyd. 1:47

"We always said we need to do more. Now we're seeing why it's important to do more," Fergus said. "Racism kills."

The list of what the Trudeau government could or should do is long. But Fergus said he is proud of what the government did in its first four years — action he believes his fellow black parliamentarians and Liberal staff were part of making happen.

Statistics Canada was provided with $6.7 million to create a new Centre for Gender, Diversity and Inclusion Statistics, which is mandated to "increase the disaggregation of various data sets by race, with a particular focus on the experience of black Canadians." A new anti-racism strategy, including the creation of an anti-racism secretariat in the public service, was given $45 million over three years.

But Celina Caesar-Chavannes, the former Liberal MP who broke with the party last year, wrote this week that the funding committed to black Canadians for mental health was not nearly enough and "certainly [does] not speak to black lives mattering."

In 2018, the government officially recognized the UN International Decade for People of African Descent and the prime minister publicly acknowledged the existence of "anti-black racism" — the first prime minister, Fergus said, to do so.

But a year later, Fergus also expressed frustration with how little the machinery of government had moved to match the prime minister's words.

"It's hard to convince people that there's a problem," he said.

Fergus has since been appointed parliamentary secretary to Jean-Yves Duclos, the president of the Treasury Board, and he is interested in promoting diversity throughout the upper echelon of the public service.

"I don't think the public service is any different from Canada in general, in the sense that it's hard to overcome the systemic barriers. We have an excellent public service that hires [people] in a way that reflects the way Canada looks. Where the public service doesn't do as well is, as you go up the ranks, it becomes more and more homogeneous," Fergus said.

In Fergus's view, this is a textbook example of unconscious bias.

"This is an example of systemic discrimination — there are practices or assumptions or biases at play that end up having these kinds of results. You have to be conscious of these biases, and we have to really challenge the way it is," he says.

"It doesn't make sense that there's been no black deputy ministers — you can't convince me that there aren't black people who are competent. But there's something that went into the calculation over time that that person didn't make the right fit, or didn't get that promotion. We can justify any individual decision, but when you aggregate all these decisions, you end up with a biased result.

When the Trudeau government promoted Caroline Xavier to associate deputy minister at the Department of Immigration, Refugees and Citizenship, she became the first black woman to reach that level of the public service. (Duclos's chief of staff, Marjorie Michel, is also the first black of woman to hold that title in the federal government.)

But diversifying the public service is just one path of change and other areas crying out for government action.

Caesar-Chavannes laid out a proposed agenda that includes a review of immigration policy, increased government funding and the expunging of criminal records for marijuana possession, a charge that disproportionately punished black Canadians. She also called for the repeal of mandatory minimum sentencing guidelines.

Let's try to make this something that resonates longer and leads to substantive and systemic changes. This is the time.​- Liberal MP Greg Fergus

The RCMP and policing reform have emerged as significant points of debate in the weeks and months ahead. The NDP has already called for bans on racial profiling and the practice of "carding," in which police stop individuals and ask to see ID without any evidence of wrongdoing.

Questions about policing and justice can be politically difficult to navigate — for decades, the incentive for politicians has been to seem "tough" on crime. That tide could be turning, but, regardless, the Trudeau government is unlikely to be excused for failing to deal with these issues.

But combating systemic racism and improving the lives of black Canadians means going well beyond such issues.

Fergus: 'If there ever was a time to speak, it's now'

Fergus said there is interest among black community leaders in federal support for black-owned businesses. The federal government could, for instance, provide microcredit and organize a program to provide mentorship from black financial experts. It has also been suggested that federal procurement policy could be used to benefit black-owned companies, similar to how Indigenous businesses have been a specific focus since 1996.

An emphasis on data — to better understand how black Canadians are doing and how public policy affects them — is a common theme across calls for change, including an essay penned last week by Sen. Wanda Thomas Bernard.

"That will be the gift that keeps giving," Fergus said of better data.

Fergus said his advice to black Canadians and activists is to capitalize on this moment.

What Fergus saw around him on Friday tells him that Canadians are ready for and expecting that change.

"I think Canadians expect us to do more. And looking at the people who were in the crowd — really, it was good for me. It was really good for me to so many non-blacks took part. They were clearly the majority," he said.

"That is a good feeling. They are awake to this."