The Liberals are promising to ensure all Canadians have access to a family doctor, mental health services and prescription drugs, but have released few details about how a re-elected Liberal government would implement a national pharmacare program or how much it would cost.

The Liberals are promising to ensure all Canadians have access to a family doctor, mental health services and prescription drugs, but have released few details about how a re-elected Liberal government would implement a national pharmacare program or how much it would cost.

Promising to take the "critical next steps" toward a national pharmacare program, party background materials released to journalists say the Liberals are seeking a mandate to design and implement such a program and would negotiate with the provinces and territories to improve health care outcomes.

Holding a campaign event in Hamilton, Ont., Liberal Leader Justin Trudeau said Liberals "believe in" universal pharmacare as laid out by the advisory council report commissioned by his government. But he said it's not a decision for the federal government alone; it requires partnerships and negotiations across provinces and territories.

He took sharp aim at Ontario Premier Doug Ford and his cuts to health care programs, billing himself as the best leader to stand tough against Conservative Leader Andrew Scheer's provincial cousin through those negotiations.

"So the question becomes for Canadians, 'Who do you want negotiating with Doug Ford when it comes to your health?'" he said.

"He wants to change the channel from his situation he's facing and he's busy campaigning and that's fine. I'm busy governing and we're doing a great job turning this province around and putting money back into people's pockets and creating 230,000 jobs in the last year and four months," Ford told CBC News in Toronto.

"So he can continue doing that. I'm going to continue focusing on the province."

"Premier Ford, along with his provincial and territorial counterparts, has asked the federal government to do its fair share to put patients first and strengthen our provincial health care systems across Canada by increasing the growth rate of the Canada Health Transfer to 5.2 per cent annually," she said.

"We look forward to working with the federal government to ensure Ontario gets a fair and adequate share of the funding to support our province's health care needs." 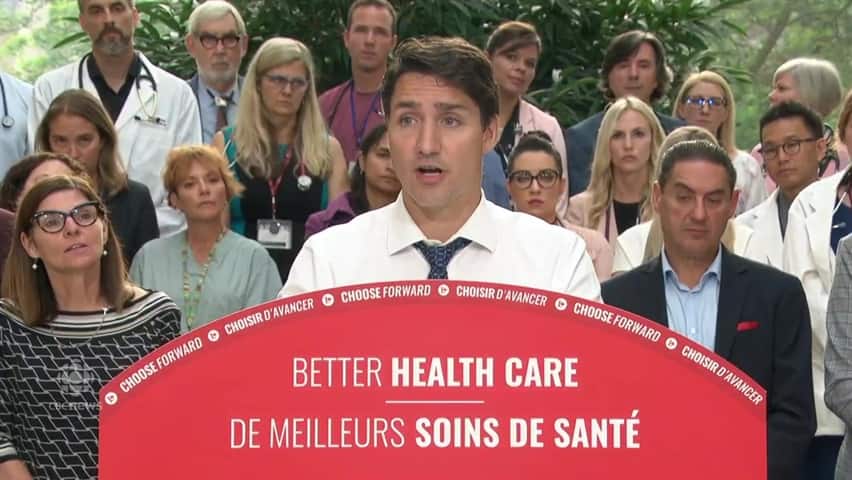 1 year ago
1:03
Liberal Leader Justin Trudeau says a re-elected Liberal government would invest $6 billion to improve access to mental health care, family doctors and prescription drugs. While speaking to reporters in Hamilton, Ont., Trudeau said he must negotiate a new pharmacare program with the provinces and territories. 1:03

Scheer shot back that Trudeau would continue to run the country's finances as unpopular former Liberal premier of Ontario Kathleen Wynne did, and suggested that Trudeau is trying to deflect from his own record of big deficits and scandal.

"He's desperate to run against anyone other than me," he said during a campaign event in Vaughan, Ont.

Scheer said a Conservative government would increase transfers for health and education by three per cent and accused Trudeau of lying to Canadians about his party's positions.

In June, an advisory council appointed by the Liberal government recommended the establishment of a universal, single-payer public pharmacare system.

The council's 171-page report called for the creation of a new drug agency that would draft a national list of prescription medicines that would be covered by the taxpayer, beginning with an initial list of common and essential drugs, by Jan. 1, 2022.

The council recommended that the initial list be expanded to a comprehensive plan by Jan. 2, 2027. When fully implemented, the total cost would be about $15 billion a year, the council said.

Dr. Eric Hoskins, a former Ontario health minister and chair of the advisory council, acknowledged at the time there are "significant incremental costs" to building a pharmacare program, but he noted that those costs are already being picked up by Canadians.

The Liberal backgrounder released Monday with Trudeau's announcement says a re-elected Liberal government would also commit to establishing the Canada Drug Agency to make drug purchasing "more effective and efficient," implement a national formulary with provinces, territories and other stakeholders to lower drug prices, and introduce a rare disease drug strategy to help Canadian families save money on high-cost drugs.

Drug pricing changes on the way

The federal government is also making changes to the way it will evaluate new drug prices in a move to try to save Canadians billions of dollars over the next 10 years.

In August, the government released changes to the Patented Medicine Prices Review Board, first set up in 1987 as a shield against high drug prices, which are set to kick in next July.

Under the new regulations, the board will no longer compare prices with the United States and Switzerland (which have some of the world's highest drug prices) when figuring out what companies are allowed to charge. It will still compare drug prices to France, Germany and Italy, and has added Japan, Spain, Norway, Australia, Belgium and the Netherlands to the list.

"Every Canadian, no matter where they live, who they are or what they do, should receive the care they need to stay healthy," Trudeau said.

The Liberal Party says these measures would represent a $6 billion federal investment — what it calls an "additional down payment" — with details related to costing to be released "over the course of the campaign."

The Liberal Party has been criticized for not having every platform promise costed and publicly released by the Parliamentary Budget Officer, as the Conservative Party and NDP have done.

Today, NDP Leader Jagmeet Singh said the current system, which can diagnose a patient without offering subsidized medication, is "illogical" and "irrational." He said an NDP government would bring in a universal pharmacare program within just one year.

While Trudeau appeared to hedge on the exact model of pharmacare that would ultimately be adopted, Linda Silas, president of the Canadian Federation of Nurses Unions, took from the announcement that Liberals would bring in a universal program, rather than a limited one. She said access to prescription medication should be guaranteed, just like access to hospitals and doctors.

"As nurses, we've been advocating for universal pharmacare for decades, because we see first-hand how our patients are suffering and how our system is squandering precious resources that could be reinvested in home care, long-term care, primary care, mental health and acute care," said Silas in a statement.

"Study after study has confirmed universal drug coverage is the most efficient, economical and equitable option for Canada."

With files from the CBC's Meagan Fitzpatrick and Evan Dyer