Prime Minister Justin Trudeau has been reluctant to weigh in on the U.S. election, and the prospect of a Donald Trump presidency, but the Liberal Party has clearly staked out its position on the choice facing Americans ahead of tonight's debate.

'A fundamental choice will be on display tonight south of the border,' email says

Prime Minister Justin Trudeau has been reluctant to weigh in on the U.S. election, and the prospect of a Donald Trump presidency, but the Liberal Party has clearly staked out its position on the choice facing Americans ahead of tonight's debate.

Although the email does not refer to either of the U.S. candidates by name, it characterizes the U.S. campaign as a choice between opposing values — and leaves no doubt about which side the Liberal Party is on.

"A fundamental choice will be on display tonight south of the border, when two U.S. presidential candidates go toe to toe in the first presidential debate — and many of the themes might be familiar to you.

"Hope or fear? Diversity or division? Openness and inclusion, or turning our backs on the world?" writes Braeden Caley, the director of communications for the Liberal Party, in the fundraising email to supporters.

Caley compares that campaign of "fear" to the one run by the Conservatives in the last election, one he characterizes as having "pitted neighbour against neighbour," with its proposed barbaric cultural practices tip line, among other policy positions.

He writes that Conservative leadership candidates Kellie Leitch, Tony Clement and Brad Trost, are trying to "stoke the same fears and anxieties."

"This kind of negative, divisive politics builds walls between Canadians — and it shows us all how much is at stake," Caley said. "Let's make sure that in Canada, positive politics isn't up for debate."​

Another Liberal fundraising email sent over the weekend by party president Anna Gainey similarly sought to align some Conservative leadership contenders with Trump and presented the Liberals as a bulwark against this type of politics.

"If the world's recent experience has made one thing crystal clear, it's that we all have a vital role to play in stopping this rhetoric from becoming reality," she wrote in an email titled "Anti-Canadian," a reference to Leitch's proposal to screen prospective immigrants for troublesome values.

Leitch has sent out her own fundraising emails hitting back at the criticism lobbed at her for proposing the controversial measure and for posing for a Maclean's magazine cover with the headline "Are You Canadian Enough?"

"Do you know what has them so upset? It is because I'm proudly holding a Canadian flag! That's right, the self-hating Canadian elites can't stand the idea of a proud conservative standing up for Canada and Canadian values," Leitch said of critics.

'The better angels of American nature'

Trudeau has been asked explicitly about a Trump presidency, and why he hasn't gone to greater lengths to condemn Trump's rhetoric about Muslims, Mexicans and other minorities.

"I respect the American electoral process," Trudeau said in an interview with Rosemary Barton for CBC New Network's Power & Politics in March. "I have faith in what Lincoln referred to as 'the better angels of American nature' and I am looking forward to who I am going to work with after Nov. 4." (The U.S. Presidential election is actually Nov. 8.)

"The machinery of government and the depth and complexity of the relationship between our two countries goes far beyond any two personalities in office at any given time."

NDP Leader Tom Mulcair has been critical of Trudeau for not condemning Trump.

"I will not hesitate to point out the fact that Mr. Trudeau just shrugs his shoulders when he's asked about Donald Trump and says, 'Oh the relationship between Canada and the United States goes beyond any two individuals.' I'm sorry, if a fascist becomes president of the United States, I want to be on record as having opposed it long before that election," he said.

Trudeau has since sharpened his criticism of the kind of rhetoric Trump is accused of using, without ever mentioning him by name. Last week, during his address to the United Nations, Trudeau condemned politicians who stoke anxiety for political gain. 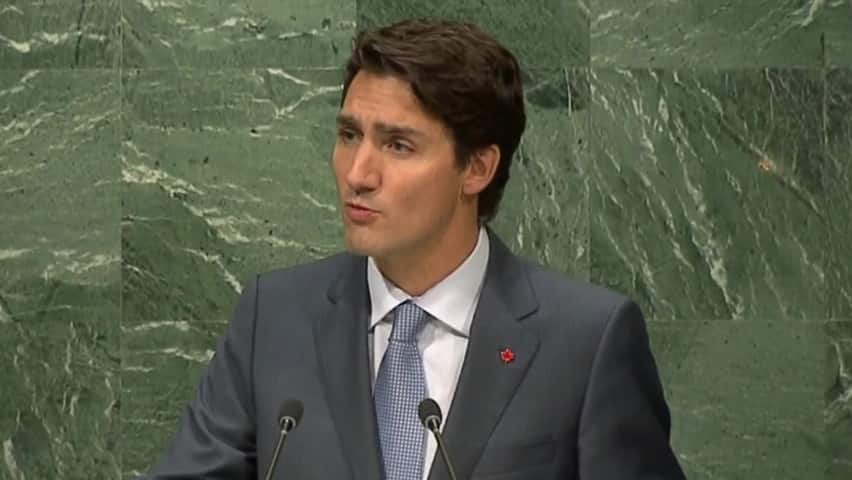 Historically, Canadian leaders have been reluctant to insert themselves in the U.S. presidential election campaign or endorse one particular candidate.

Caley said Monday in a statement to CBC News that while the Liberal Party might have gone on the offensive against some of the rhetoric articulated by Trump, Trudeau will still work with whoever ascends to the presidency.

"The prime minister has been very clear and consistent about his respect for the American electoral process, and how he looks forward to working with whomever the American people elect as their next president," he said in an email.