The leaders' debate, perhaps the most-watched event of the 2019 federal campaign, was a six-way melee that repeatedly wandered off topic as the participants sought to land that elusive knockout shot.

"The choice Canadians are facing is clear," said Justin Trudeau, turning to the camera across from him to speak directly to the television audience. Before he could finish the thought, he was subsumed by cross-talk.

But he was beset on all sides by rivals — Conservative leader Andrew Scheer, primarily, but also NDP leader Jagmeet Singh and Green leader Elizabeth May — who were eager to deliver their own lines and trample all over his.

Trudeau has fought and won his share of public contests — from real boxing to the make-believe fisticuffs of election debates. But this televised brawl — a microcosm of this election — was something else entirely, more complicated and with greater stakes.

Two weeks short of finding out whether he might be prime minister for another four years, Trudeau was challenged to simply hold his ground.

His first appeal to clarity came as a segment about Indigenous affairs wandered off into the great, overarching question of climate change.

Given the opportunity to ask a question of another leader, May went right at Trudeau, calling on him to adopt a more ambitious target for reducing greenhouse gas emissions.

"Targets are not a plan," Trudeau responded.

The Liberal plan, he insisted, was "realistic, ambitious and doable."

She then hit Trudeau on his decision to purchase the Trans Mountain pipeline, insisting that he could not be a "climate leader" and make that decision. Trudeau seemed ready for this.

"A slogan is not a plan," Trudeau said.

May insisted she had a plan. Trudeau responded that it was "unrealizable."

May, who can seem flummoxed when disagreed with, momentarily seemed to agree that the Trudeau government had done more on climate change than previous governments, but then insisted that former Liberal prime minister Paul Martin had had a better plan in 2005. Trudeau quickly pointed out that the Martin government hadn't implemented that plan. 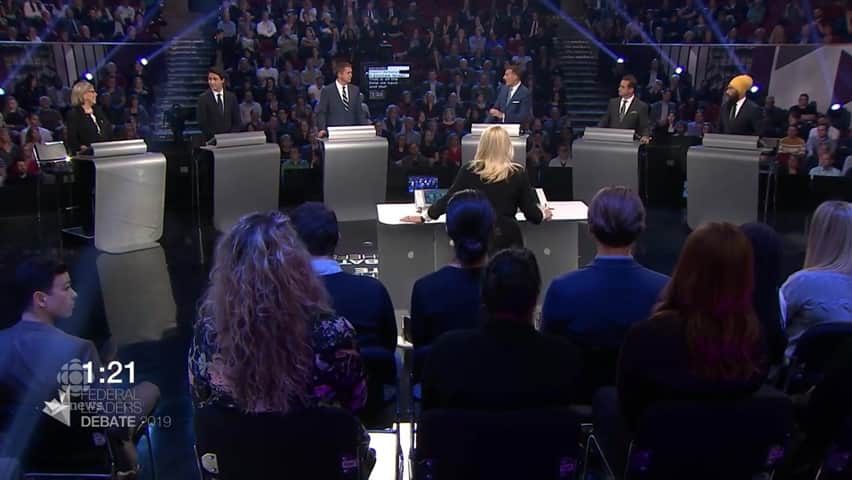 Leaders battle it out on their climate plans

1 year ago
3:47
In the segment of the debate that may have featured the best one-liners, the leaders go on the offensive - and defend - plans on climate change. 3:47

But then Trudeau, who had turned to his right to address May, was suddenly hit from his left by Scheer, who was insisting that, contra Trudeau's assurances, the rebate from the federal carbon levy would not leave most Canadians better off.

"Just because you say something over and over again doesn't make it true," Scheer said.

"Oh, it would be nice for you to learn that, Mr. Scheer," Trudeau said.

There was a ripple of laughter from the audience.

"No one believes your numbers, Justin," Scheer said.

Then Singh jumped in, telling viewers that they didn't need to choose between "Mr. Delay" and "Mr. Deny."

But before the NDP leader could finish his thought, May came back to challenge Singh on his own target.

Then Maxime Bernier, the People's Party leader, chimed in to claim that Scheer and Trudeau were the same on climate change.

Trying to make their mark

One politician, on his or her own, tends to consume a significant amount of oxygen. Put six of them on stage and things are bound to get messy. But such is life in a multi-party democracy.

With air time at a premium, the participants seemed determined to capitalize on their moments, with most of their energies put toward explaining their complaints about how Trudeau has governed.

The home audience had only just tuned in when Scheer turned and delivered a remarkable attack on Trudeau that culminated in the Conservative leader calling the Liberal leader a "phoney" and a "fraud."

The aggressive tack seemed like a deliberate reaction to a timid and widely panned performance last week at the TVA debate. It looked like a politician who went into this debate thinking he needed to land the fabled "knockout punch."

But, in that respect, it did not suggest a politician who is confident about his standing in the polls.

Singh was loose and in good spirits. When a moderator referred to him as "Mr. Scheer," Singh joked that they shouldn't be easy to confuse with each other and that he'd worn an orange turban for just this reason. 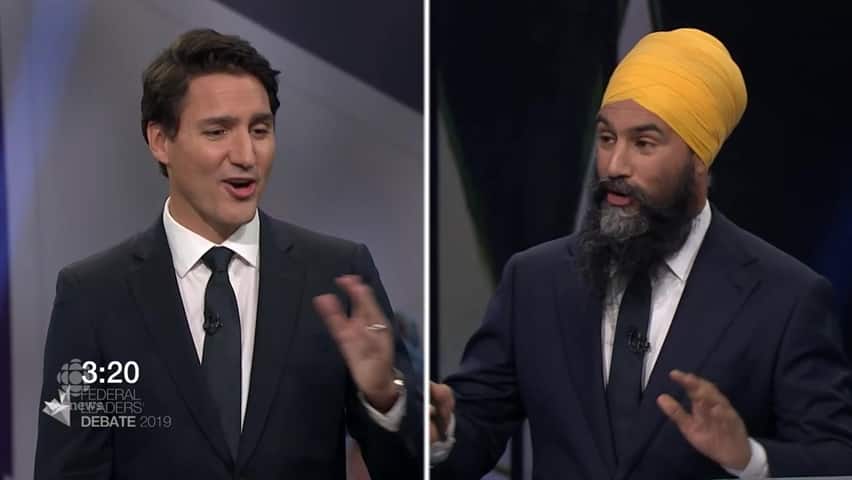 Trudeau confuses Singh and Scheer during debate on taxes

At one point, three of the leaders on stage — most notably Scheer, who would benefit from the NDP taking votes away from the Liberals — took turns praising Singh's handling of issues of race in this campaign.

Singh tried to position himself as the anti-elite fighter, portraying Trudeau as a politician with "nice words" but not enough action. May was, as always, the pleading voice of climate concern. At one point, she seemed to appeal for God to intervene to block a Liberal majority.

While Scheer was throwing haymakers in hopes of landing something that would turn the campaign, Trudeau was mostly content to jab back in response, with periodic flourishes.

The most decisive blows in previous debates — Brian Mulroney hitting John Turner in 1984, Jack Layton flooring Michael Ignatieff in 2011 — came when the leader being attacked seemed momentarily stunned and unable to respond.

Trudeau seemed to avoid such a moment — though he seems unwilling or unable to counter claims that his emissions policy for large emitters amounts to an exemption — but he still had to absorb an array of blows.

The most-passionate version of Trudeau emerged in the night's final segment, on the environment and energy. There, again, Trudeau invoked the choice he wants voters to see, between Conservatives who would rip up the current plan to reduce greenhouse gas emissions and Liberals who are pledged to keep going.

When May again beseeched him to do more, Trudeau reminded her that he's currently opposed by Conservative premiers "from the Rocky Mountains to the Bay of Fundy."

The clarity of that purported choice is muddled by all manner of other issues and considerations: from blackface and SNC-Lavalin to the purchase of a pipeline to unfulfilled promises, to the competing climate proposals of the Greens and NDP. All of that challenges Trudeau's preferred frame. All of it, including the bits that have nothing to do with the future of the planet, weighs on the actual choice.

Nothing is ever simple in a multi-party democracy. Whether it's a two-hour debate or a six-week campaign, the contest comes down to who breaks through the noise.