The red carpet was rolled out for Prime Minister Justin Trudeau and his wife, Sophie Grégoire-Trudeau, as they arrived for a glamorous state dinner with about 200 guests. It was a star-studded affair that included Michael J. Fox, Ryan Reynolds, Mike Myers and Sandra Oh. 5 years ago
1:30
Pleasantries exchanged, but not without a few friendly jabs 1:30

After months of planning and plenty of anticipation, the red carpet was finally rolled out at the White House and the first state dinner for a Canadian prime minister in 19 years took place.

Prime Minister Justin Trudeau and his wife, Sophie Grégoire-Trudeau, were greeted at the front door of the famous residence by President Barack Obama and his wife, Michelle. The cameras were lined up to capture the glamour and style.

Trudeau spoke at the dinner about how close Canada and the U.S. are and how the relationship is beneficial for both countries and for the entire world.

"We're actually closer than friends," Trudeau said in his official toast, after reciting a Harry Truman quote from nearly 70 years ago when he spoke in Ottawa.

"We're more like siblings, really. We have shared parentage, but we took different paths in our later years. We became the stay-at-home type, you grew up to be a little more rebellious."

Trudeau joked that he hopes his "grey hair comes in at a slower rate," than Obama's after a few years in office. 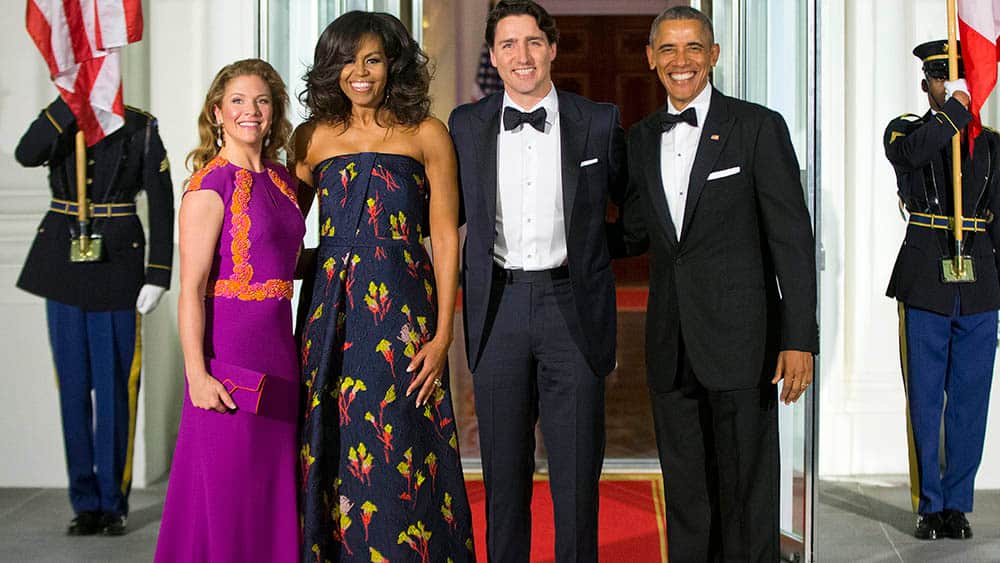 5 years ago
1:24
Justin Trudeau and Sophie Grégoire-Trudeau were greeted by U.S. President Barack Obama and Michelle Obama at the White House for Thursday's state dinner 1:24

There haven't been many of these lavish state dinners during Obama's time in office, and this could be one of the president's last given he has only a few months left in office.

Obama was both lighthearted and serious in his remarks. He cracked that Trudeau "might well be the most popular Canadian named Justin," but also took the time to praise the prime minister's mother Margaret Trudeau who was in attendance.

"We also see Canada's spirit in your mother's brave advocacy for mental health care, and I want to give a special welcome to Margaret Trudeau tonight," Obama said. The room burst into applause and guests rose to their feet, led in the standing ovation by Michelle Obama.

As far as the relationship between the countries, the president stressed the shared values of Canada and the U.S.

"We're committed to principles of equality and opportunity, and if you work hard and play by the rules, you can make it, no matter the circumstances of your birth,"he said.

About 200 guests joined the Trudeaus, including Grégoire-Trudeau's parents, the cabinet ministers who are on the trip and several members of Trudeau's staff. Stephen Bronfman, a key fundraiser for the Liberal Party and a longtime Trudeau family friend, and Liberal Party president Anna Gainey were also in attendance.

Some of the stars stopped to talk briefly to reporters as they arrived. Myers said he's proud to be Canadian and American and that when he lived in Canada Trudeau's father was prime minister. The comedian said he's "thrilled" that his son is now the leader of Canada.

Oh, a former star on Grey's Anatomy and an Ottawa native, said she was feeling "extremely proud of Canada."

"This is such a celebration of two countries," Oh said as she went into the party. 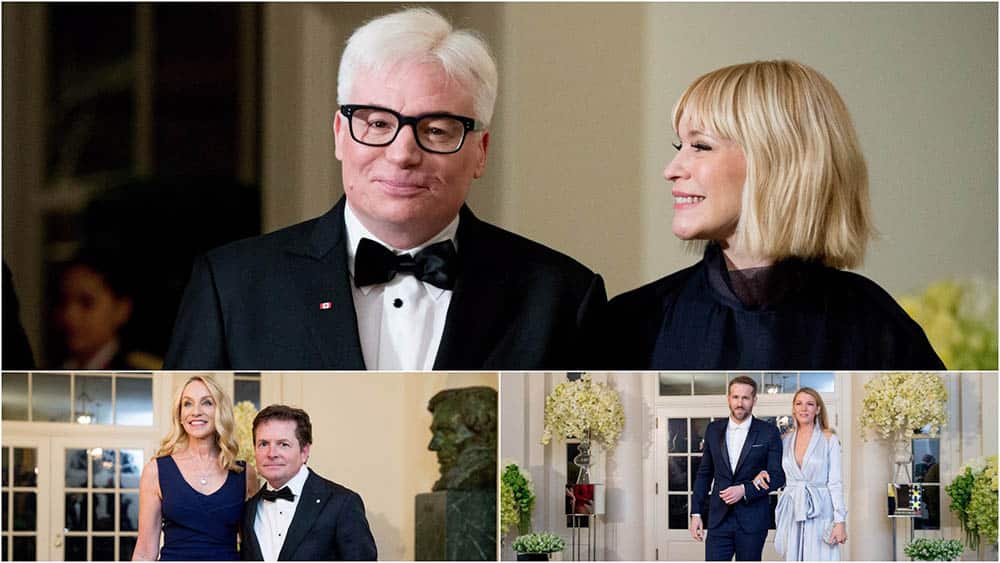 Some American politicians in attendance had kind words for Trudeau, and Senator Amy Klobuchar of Minnesota said this official visit will remind Americans about the importance of Canada.

The Canadian delegation was given a block of tickets, and the rest of the invitation list was up to the president and his wife.

Grégoire-Trudeau is known to wear clothing by Canadian designers during public events, and at the state dinner she wore a long magenta dress by Toronto designer Lucian Matis. The rest of her outfit included Zvelle shoes, John de Jong earrings and a Dean Davidson ring. The prime minister's wife wore a different Lucian Matis dress earlier in the day for her first appearance at the White House during the official welcoming ceremony.

The fancy black-tie affair capped off a busy day for Trudeau, who arrived in Washington on Wednesday evening. It began with a welcoming ceremony on the South Lawn of the White House where a crowd including many patriotic Canadians cheered during remarks by Obama and Trudeau.

The two leaders had a meeting in the Oval Office and a joint press conference, announcing new measures on fighting climate change and on border security. Trudeau had lunch at the State Department with Secretary of State John Kerry.

An elaborate menu blending American cuisine and ingredients with Canadian flavours, including some Canadian whisky, was planned for the state dinner. Mini-poutine canapés, halibut, salad and lamb with potatoes and spring vegetables were also on the menu.

The dessert plate theme was inspired by the Rocky Mountains and features white chocolate snowballs and other bite-size treats.

This wasn't the first time a Trudeau dined at the White House. Pierre Trudeau was honoured with two state dinners during his time as prime minister. The last state dinner for a Canadian prime minister was in 1997, when Jean Chrétien was hosted by President Bill Clinton.