Prime Minister Justin Trudeau says he raised the issue of freedom of expression and the importance of diversity in his meetings this week with Chinese President Xi Jinping, and encouraged him to do more to protect human rights. 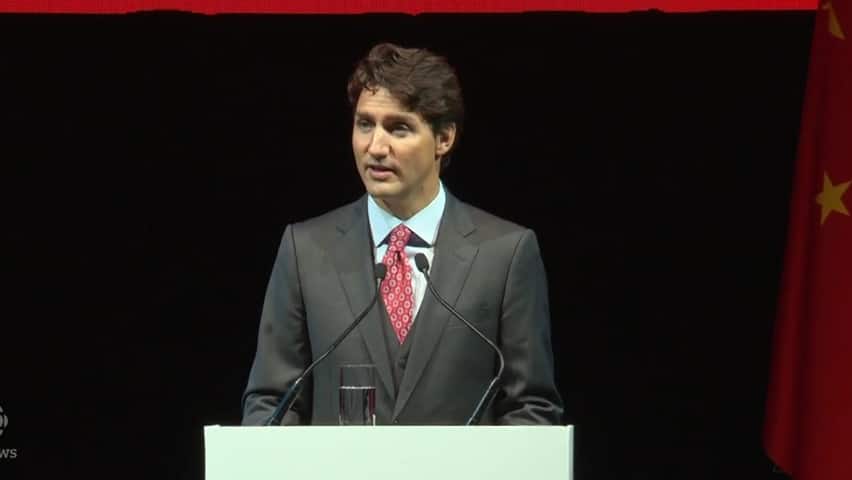 4 years agoVideo
1:50
Prime Minister Justin Trudeau delivers a speech in Shanghai where he says he talked to President Xi and Premier Li about human rights. 1:50

Prime Minister Justin Trudeau says he raised the issue of freedom of expression and the importance of diversity in his meetings this week with Chinese President Xi Jinping, and encouraged him to do more to protect human rights.

"I shared with them my strong conviction that acceptance of diverse perspectives will strengthen China, just as it has Canada. In a world of rapid change, it is a diversity of ideas, and the free ability to express them, that drives positive change," Trudeau said at a gala held by the Canada-China Business Council in Shanghai.

The prime minister said they are "not easy conversations to have," but "a stronger relationship makes it easier for our two countries to have regular, frank discussions."

Trudeau didn't delve into what those frank discussions involved, but Guy Saint-Jacques, Canada's top diplomat in China, said the prime minister did raise individual consular cases, including Canadian Kevin Garratt, who was indicted on charges of espionage.

On Tuesday, with Trudeau's face gracing the front pages of newspapers in China, the state-run Xinhua news agency scolded Canada for allowing "groundless" human rights concerns to hinder what could be a productive relationship with China.

It also urged Canada to look within its borders at its own reputation on the treatment of Indigenous people, some of whom live in "miserable conditions." The item added the "so-called human rights issue" comes from the "West's longstanding prejudice and arrogance against China."

Saint-Jacques said freedom of expression is moving backwards, in China and "that's why Canada has used opportunities to express its views" to that country.

In an announcement Thursday, China and Canada agreed to collaborate "in support of gender equality and the empowerment of women and children globally."

"We're Canadians. We travel with our values. And share them. So while we're on the subject, gentlemen – it's 2016. We need a lot more women on this stage," Trudeau said, a nod to his speech at the November cabinet unveiling.

His speech came during his week-long official visit aimed at forging deeper commercial and cultural bonds between the two countries.

In his predominantly business-related speech, Trudeau noted that Canada's relationship with China has become "distant and unfocused."

"So I want to be as clear as I possibly can be on this point: China matters to Canada," he said to applause.

Trudeau said Canada can strengthen its relationship with China through trade, investment and tourism.

"Think of the ways in which our cultural ties are deepened and strengthened by the experiences of young Chinese students who come to Canada to learn at our universities," he said.

The speech also focused on the need to work together on climate change.

"Climate change is a global challenge – one that demands a global response," Trudeau told the crowd.

On Friday, the prime minister will hold an event at a high school with former NBA basketball star Yao Ming, meet with executives of Fosun Group and Cirque du Soleil, and participate in a roundtable with women entrepreneurs.

Next week, he'll attend the G20 leaders' summit in Hangzhou.