Justin Trudeau was lauded for his youth, gender-balanced approach to cabinet and even his colourful socks, at a question and answer session with 50 young leaders from 38 countries identified in Davos as 'Global Shapers.'

On Thursday afternoon, before a gathering of 50 young people between the ages of 20 and 30 — those who, in the official description, "are exceptional in their potential, their achievements and their drive to make a contribution to their communities" — the prime minister of Canada was publicly complimented on his "sock swag."

In this case, the hosiery was purple with lime green skulls and crossbones.

"You can see, we're just so excited to have this chat with you," offered the moderator, after Justin Trudeau had been greeted by a standing ovation and one whoop. "In particular, we're just amazed by how much you've accomplished in a very short amount of time. It seems like you've awakened, or reawakened rather, the spirit of an inclusive, welcoming, positive Canada."

His formidable audience — gathered together as "Global Shapers" and boasting the sort of resumes that humble their elders — was indeed enthusiastic.

"There's three words that you said — '[because] it's 2015' — that really made a lot of people in Nepal, a lot of people around the world, realize the importance of gender parity," a young man recalled of Trudeau's quip after swearing in a cabinet split evenly by gender.

A woman from South Africa said it was "exemplary" how Trudeau had welcomed Syrian refugees to Canada himself, and suggested other leaders might do likewise.

Trudeau wore a tie, but no jacket, the sleeves on his white shirt rolled up to the elbows. Somewhat awkwardly, he delivered his opening statement from a prepared text, but then settled in. A joke about Lord of the Rings was well-received.

At the conclusion of the 50-minute session, Trudeau and the shapers gathered for a group selfie, taken in this case with the assistance of a selfie stick.

Granted, the easily dismissed notion of the selfie was elevated somewhat by the unrelated discovery that Pinchas Goldschmidt, the 52-year-old chief rabbi of Moscow, had earlier posed for such a photo with Trudeau. "Why not?" the rabbi told a Radio-Canada reporter, when asked why he'd stepped forward to share a camera frame with Trudeau. "A, he's good looking. B, he's young. Three, he's the prime minister of Canada." 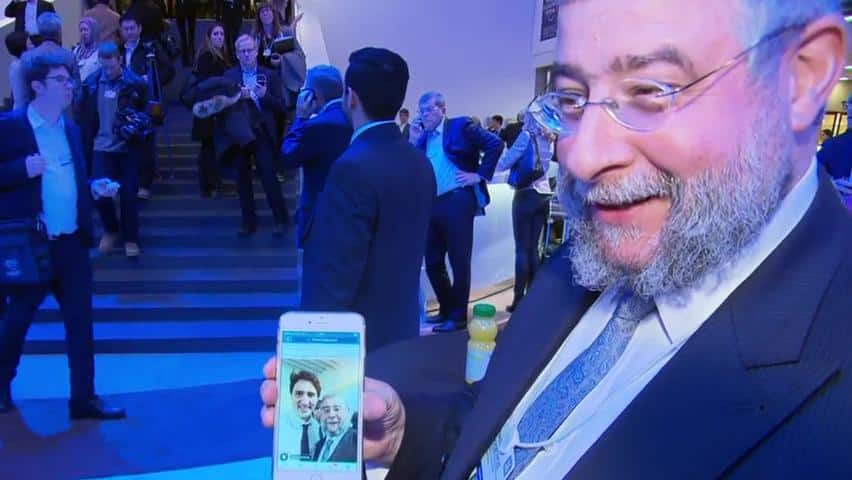 5 years ago
0:43
Pinchas Goldschmidt speaks with Radio-Canada's Joyce Napier at the World Economic Forum in Davos 0:43

So it is not merely the young who are enthusiastic. But it is also not impossible to see what the young might see in him.

He enthused again about diversity. Living with diversity, he said, was one of the major challenges of the 21st century. He spoke of compromise, inclusiveness, shared values, education and bringing the public into the political process.

He spoke of how schools are where Canadian children, celebrating and encountering each other's cultural traditions, learn the notion of diversity. "The range of experiences become the mainstream in Canada," he said. "And that for me happens within our public schools, it happens within our education."

A woman in the audience nodded as he spoke.

He presented his government's welcoming of thousands of Syrian refugees, together with the assistance of communities and civil society, as having a message for Canadians. "I wanted to remind Canadians of who we are," he said. "We, as a country, have succeeded by welcoming people from different parts of the world in difficult times … And we needed to remind ourselves as a country what it is we are capable of."

He also ventured that, "Frankly, if we can highlight how Islam is not incompatible with free and open Western secular democracies, well that's a nice punch in the face of ISIL and everything that they stand for."

Asked how he might use the moral authority of his office to influence the world's understanding of inclusion, he begged off slightly, explaining that it was not for Canada to "impose" a solution. "Canada's never been able to impose by its economic might or its cultural weight," he said. "We've always tried to set forward interesting solutions and succeed for ourselves and share our stories. And that's an approach I think the world needs more of."

Trudeau lamented in jest at one point that there wasn't a Canadian amongst the shapers. And it is surely possible that those in attendance are only observing Trudeau from afar, from the headlines he has generated internationally and the sense of who he is that is projected in how he speaks and what he talks about.

Of course, when anything is observed closely and regularly, the flaws are easier to identify. And this was perhaps not the crowd, or the setting, for a tough interrogation. This was about what he so far embodies (and perhaps the delight of having a prime minister in your presence). Much like the suggestion of a day before, by the World Economic Forum's founder, that Trudeau represented the future.

"I think the prime minister is really the new face of youth, driving change in Canada, but his impact cuts across every nation," said Michael Nganga, a delegate from Kenya. "So I'm from Nairobi, and yet I do know about him. Social media, that he's now the prime minister. He's young, looks good, you know, it's in the media, it's everywhere. But you see, him going in, it's such a good representation of that we can actually do it, as youth, as young people, as global shapers."

Nganga livestreamed Trudeau's session and he noted that the comments, he thinks maybe from Canada, were not all positive in regards to the prime minister, with some questioning Trudeau's abilities.

Nganga conceded Trudeau was not perfect.