Prime Minister Justin Trudeau promised to usher in a new era of "sunny ways" in government, and it appears the shift is already rubbing off on some famous foes.

On election night, Justin Trudeau promised to lead a government characterized by "sunny ways," and it seems that new spirit has already rubbed off on some famous foes in Canadian history — and all it took was a seating chart.

Two former Liberal prime ministers, Jean Chrétien and John Turner, were both in the ballroom at Rideau Hall to witness the swearing-in of Trudeau's new cabinet on Wednesday.

But they weren't just in the same room, they were seated right next to one another, and that positioning raised eyebrows among some longtime political observers.

It might seem like a logical choice: pair up the country's elder statesmen. The two could reminisce about the good old days when they both served in Pierre Trudeau's cabinet, and Justin Trudeau was nothing more than a toddler nipping at his father's heels.

But what a casual observer of history might have forgotten is that Chrétien, 81, and Turner, 86, have had a truly tumultuous relationship. They practically invented "Liberal infighting."

And yet they didn't end up side by side accidentally. After all, the Prime Minister's Office drew up the seating chart.

'Bad blood' between Chrétien and Turner

The bad blood between the two began to brew in 1978 when a paper Turner authored harshly criticized Chrétien's performance as finance minister. For weeks, he was taunted in the House of Commons by the opposition.

Chrétien counter-attacked, calling Turner's writings nothing more than "a gossip column that you can have for 15 cents." He would never forget the incident and vowed revenge.

The animosity boiled over in 1986 when the two men squared off in an epic leadership battle around the party's convention. 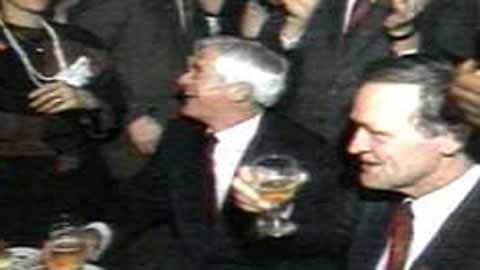 35 years ago
3:23
Jean Chrétien loses to John Turner in a bitter race to head the Liberal party. 3:23

Fresh off one of the party's worst election performances in its history — the 1984 election — Chrétien made a move to dislodge Turner from the top job. In fact, this quest for the leadership morphed into an outright anti-Turner crusade.

Ultimately, the polished Turner triumphed over the p'tit gars from Shawinigan's insurgency.

None of that animosity was on display Wednesday. CBC cameras caught the two engaged in friendly chatter before the formal swearing-in ceremony began.

Turner cracked a smile, and Chrétien warmly grabbed his old colleague and rival's arm as he vigorously made a point. Sunny ways, indeed.

And yet it wasn't only Chrétien and Turner who were forced to make nice at the proceedings Wednesday. Two former governors general — Adrienne Clarkson and Michaëlle Jean — were also seated next to one another, and they, too, have had a fractious relationship.

Clarkson, in 2009, made comments that many interpreted as a slight against Jean: future vice-regals, Clarkson said, should be forced to undergo a public Canadian knowledge quiz before they're appointed by the prime minister of the day.

The remark was made after Jean made a glaring geographical error — she mixed up B.C.'s Coastal Mountains and the Rockies.

Jean defended the slip-up and her qualifications to hold the highest office in the land. "What I brought [to the job] ... was my own story. And we live in a country where every individual can do that," Jean said.

"That's why we need to work on our sense of belonging. And belonging goes beyond the ability to name the Mackenzie River and say where it is. It goes far beyond that."

And as for Clarkson's insinuation that Jean, a former Radio-Canada journalist who spent virtually all of her adult life in Quebec, was woefully ignorant about English Canada? Jean swatted it away like a fly.

"I believe one lifetime is not enough to discover Canada. What you need — above all else — before taking on this job is having a vision, a desire to salute the best of what this country has to offer...

Clarkson, herself a former CBC broadcaster, also got her back up after the media made a fuss about Jean's appetite for raw seal meat.

On a trip to Nunavut, Jean famously ate the Inuit delicacy, causing an uproar among some animal rights activists.

It seemed the two mended fences in the midst of all the pomp and pageantry. Jean was spotted chatting with Clarkson's husband, John Ralston Saul, while Clarkson looked on with a warm, even sunny, smile.