Prime Minister Justin Trudeau marked the European Parliament's passing of the Comprehensive Economic and Trade Agreement early today, hailing it as a potential model for future trade deals while stressing the need to make it work. 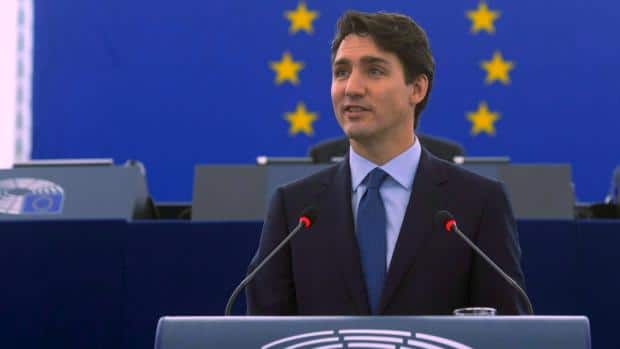 Trudeau: 'Make no mistake about it, this is an important moment'

Prime Minister Justin Trudeau marked the European Parliament's passing of the Comprehensive Economic and Trade Agreement (CETA) early today, hailing it as a potential model for future trade deals while addressing the concerns of those who opposed it.

"We can't understate how important it was to get this deal right," Trudeau told members of the European Parliament in Strasbourg, France — the first time a sitting Canadian prime minister has addressed the legislature.

"Now we need to make it work … If we are successful, CETA will become the blueprint for all ambitious, future trade deals. If we are not, this could very well be one of the last," he said.

"Make no mistake about it, this is an important moment."

In the face of growing protectionist movements around the world — most obviously from U.S. President Donald Trump , but by no means limited to the U.S. — Trudeau and his European hosts are positioning their new trade deal as the progressive alternative.

Demonstrators had continued to taunt European legislators yesterday, even as 58 per cent of them voted in favour of ratifying the agreement.

Trudeau said the concerns expressed by both voters and street protesters about a system that benefits "only the luckiest few" are valid.

"The anxiety people have towards the economy and trade — the worry that our kids won't have access to the same jobs and opportunities that we had — can be addressed only if we ensure that trade is inclusive, so that everyone benefits.

"This agreement … delivers just that."

Trudeau listed the shared beliefs the CETA process demonstrated: democracy, transparency and the rule of law, but also human rights, inclusion and diversity.

"We know that, in these times, we must choose to lead the international economy, not simply be subject to its whims."

Trudeau's international trade minister told reporters later in the day that the purpose of this trip is to "make it real."

"The voice of open trade has been heard and the world is listening," François-Philippe Champagne said. "We need to do a better job of explaining what these trade agreements have been doing for the people."

While Trudeau's speech marked CETA's ratification, the strategic alliance he was celebrating goes beyond trade issues.

In a joint news conference, the new president of the European Parliament, Italian Antonio Tajani from the centre-right European People's Party, alluded to how Canada might be able to bridge the gap between the new American administration and the European trading bloc Trump has openly cheered against in recent weeks.

Trump's ambassador-designate to the EU, Ted Malloch, said earlier this week that the EU's "blatant anti-Americanism" is "problematic."

"It's easier for the Canadians to speak to the Americans," Tajani said, suggesting perhaps Trudeau could "pave the way" to get the EU-U.S. relationship back on track.

As he did during his visit to Washington Monday, Trudeau pointed to the importance of finding a common goal with the U.S.

"What I saw from the American president was a focus on getting things done for the people who supported him and who believe in him," Trudeau said, emphasizing that a good relationship with your neighbour helps get those things done.

Trudeau also used his speech to offer words of encouragement for the EU in its time of uncertainty.

He'd been slow to speak out on the importance of a united Europe during the Brexit debate, but Thursday he called the alliance a "remarkable achievement" and an "unprecedented model for peaceful co-operation."

"Canada knows that an effective European voice on the global stage isn't just preferable, it's essential," he said. 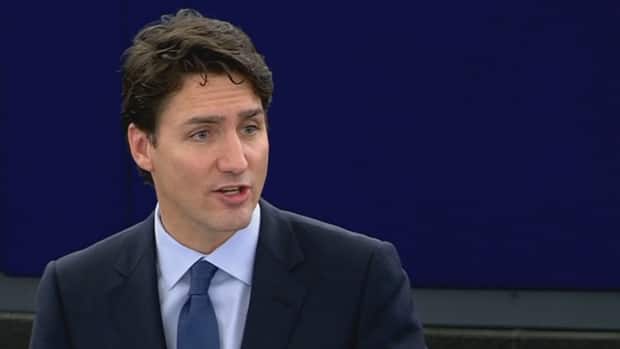 Trudeau has now travelled on to Berlin, where he met with German President Joachim Gauck and then joined German Chancellor Angela Merkel for an informal dinner.

On Friday morning, Trudeau will meet with German parliamentarians and lay a wreath at the Holocaust Memorial.

Before leaving Berlin, Trudeau will join Merkel and Berlin's mayor for a visit to the site of the terrorist attack at the city's Christmas market earlier this winter.

He then flies on to Hamburg, where he will meet leaders from German states and be the guest of honour at the St. Matthew's Day dinner.

With files from Janyce McGregor and The Associated Press