After meetings, press conferences and photo ops for the press and public alike, Justin Trudeau's cabinet retreat comes to an end.

Potash Corporation of Saskatchewan announced it would close its mine in Picadilly, NB, with the direct loss of more than 430 jobs in a rural area where jobs are hard to come by. The low price of commodities had claimed another victim, and as is the case with oil, the pain was concentrated in a particular province.

Regional minister Dominic LeBlanc said the closure is a severe blow. "The Potash mine jobs represented high-wage, long term stable employment in a province, and a part of the province, that doesn't have easy replacements for that kind of employment."

Local media had mostly already left the resort for Picadilly, near Sussex. They knew events there mattered far more to their New Brunswick audience than anything anyone was likely to do or say here.

Shifting out of campaign mode

The previous evening the Trudeau cabinet had descended on a local arena for a community spaghetti dinner, to which the whole town was invited. And much of the town appeared to show up.

About three hundred managed to get seats inside the room, while perhaps half as many again waited outside. The frenzy of selfie-snapping and the unbridled enthusiasm of the crowd for Justin Trudeau gave the occasion the feel of a  campaign event.

And sometimes, listening to Justin Trudeau's answers at his "media availabilities," it was easy to imagine oneself back on the campaign trail. There were many forward-looking statements delivered with optimism but frustratingly few specifics.

While Trudeau's honeymoon with public opinion may not yet be over, the breaking-in period of this cabinet is. Next week parliament resumes and cabinet ministers will be expected to start putting their mandate letters into action.

As if to reinforce the message, the cabinet was treated to a seminar from British political consultant Michael Barber. Barber headed the "delivery unit" of the Tony Blair government, a special office tasked with ensuring that Blair's campaign promises actually got implemented.

Barber is the author of the book How to Run A Government: so that citizens can benefit and taxpayers don't go crazy and is much in demand for his wisdom on the science of "deliverology", advising governments from Maryland to New South Wales.

Barber sat in on two days of Trudeau cabinet meetings and, perhaps not surprisingly, spoke in glowing terms of the government that had contracted his services.

He noted the large number of political neophytes in the cabinet, and said his message to the ministers was to remember their own objectives and not spend their time in office reacting to crises.

Barber told them the story of British Prime Minister Harold McMillan, who complained after leaving office that he had achieved little of his agenda. When asked why, he responded: "Events, dear boy, events."

Events have a way of intruding, such as the Picadilly mine closure. Another piece of unwelcome news arrived to sour the mood of the retreat just as it drew to a close: the revelation that Canada had not been invited to a meeting in Paris where the defence ministers of seven countries in the coalition fighting ISIS will plan the next steps in the war.

It seemed hard to explain the oversight except as a snub to a government that has announced it is pulling out of the combat mission against the jihadi group, although Defence Minister Harjit Sajjan tried valiantly to argue that it was just another meeting, and it really didn't matter. 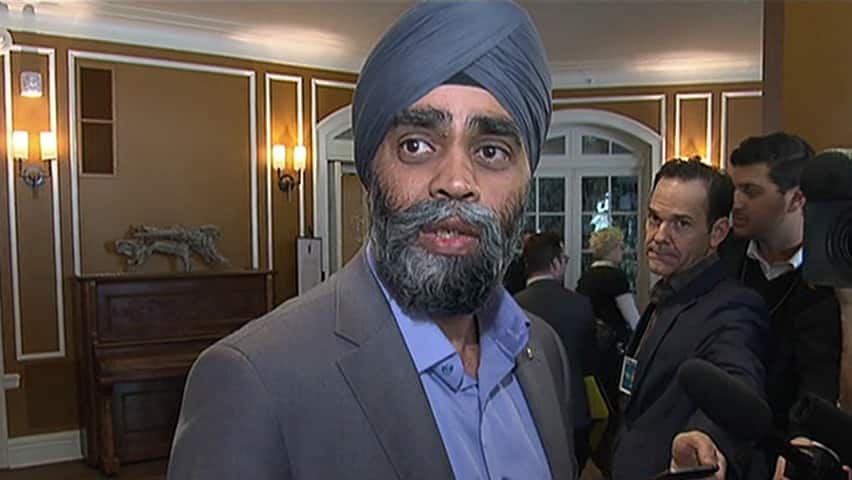 Sajjan: "meetings happen all the time"

5 years ago
2:14
Minister of Defence Harjit Sajjan responds to questions about why Canada was not invited to anti-ISIS coalition meetings in Paris. 2:14