Champion of diversity or high-profile hypocrite? Who is Justin Trudeau, anyway?

In the wake of Justin Trudeau's blackface scandal, a lot of people have been asking the question: "Who is this guy, really?" But the Liberal leader's public and private personas amount to a bundle of paradoxes.

All human beings contain contradictions - but when politicians undermine their own images, they pay a price

There's probably nothing in the Canadian political strategy textbooks about how to pivot away from blackface.

Justin Trudeau and his campaign are trying, though, as they must. He addressed the photos and video that emerged this week at length Thursday afternoon. What was supposed to be a Liberal rally on Thursday night was turned into a town hall that permitted Trudeau to talk about his failings, but also some other issues. On Friday morning, Trudeau made a new campaign commitment to implement further restrictions on firearms.

The first questions from reporters after that announcement were about guns. But eventually the queries turned back to the offending images — 11 questions in total about blackface and its ramifications.

Those questions are likely to keep popping up for a while yet. But even if reporters and voters stop asking Trudeau about blackface — a natural consequence of reporters pursuing the story of the day — this episode will never really die.

Trudeau, more than any other politician, understands the power of an image. And this week's images might persist as reason to question who Trudeau is, or to frame a narrative about what kind of leader he really is.

A lifetime of contradictions

Perhaps more than any other recent Canadian politician, Trudeau has been surrounded by questions about who he is for his entire career — a consequence of his famous last name, his public stature and his lack of a track record in some serious-seeming pursuit like business or law.

Was he a callow young man or was he an inspiring leader? Was he just a pretty face or did he possess unique gifts? Was he not ready for high office or was he just the right sort of person for the job?

There are testimonies to who he was in his teens and 20s (when he apparently still thought that blackface was okay). But those accounts include contradictions.

In Magnetic North — a short biography authored by Alan Hustak in 2017 — one person describes Trudeau the high schooler as "a bit of an attention seeker" who "knew the reaction he could provoke," but also someone who knew himself and was "extremely sensitive to what was going on around him." But Trudeau has said he could be shy and he has been described as a natural introvert.

Mary Margaret Jones, who ran the sexual assault centre at McGill University where Trudeau volunteered, has described the Trudeau she knew as "really emotionally available" and more able to discuss difficult issues like consent and rape culture than most young men his age.

Students at West Point Grey Academy in Vancouver told Hustak that they remembered Trudeau as "energetic," "slightly nerdy," "eccentric" and "goofy." Hustak relays a story of Trudeau accepting a student's dare to ride a skateboard down a steep slope. The future prime minister fell hard and ended up covered in mud.

"We were all in stitches," the student told Hustak. "What kind of a teacher would do that kind of thing?"

Perhaps the same kind of teacher who would show up to sell raffle tickets at a charity gala dressed as Aladdin with his face and arms and hands painted brown.

Justin Trudeau was "emotionally available" — and goofy. Pierre Trudeau was a showman and so was his son.

As a backbench MP and Liberal leader, Justin Trudeau was a mix of high-mindedness and stumbles. He swore at the environment minister. He made a silly comment about China. He made a very unfortunate joke about hockey and Vladimir Putin.

He also talked about changing the way politics is done and embracing diversity and tackling income inequality and combating climate change and pursuing reconciliation.

Either way, almost nothing that Trudeau does is done quietly.

His time in government has been a similar mix of ideals and pratfalls. Because of his office, the falls have landed harder.

His trip to the Aga Khan's island was used to undercut his stated commitment to the middle class. His trip to India revived the charge that he was insufficiently serious. The SNC-Lavalin affair undermined the claim that he was going to do things differently.

Those ideals, meanwhile, proved hard to live up to. Compared to the track Canada was on in 2015, emissions are now projected to decline by 200 megatonnes, pending further policies. But Trudeau also bought a pipeline (even if he was clear from the outset that he supported building a pipeline). Whatever the government has done to improve its relationship with Indigenous peoples, it also has surely disappointed them.

Trudeau has spoken of few issues with more passion than diversity and tolerance — perhaps overly so in some estimations. His government has enacted policies in line with that rhetoric (though one can debate whether it has moved fast enough or far enough). He has condemned white supremacy and directly challenged those who try to stoke fears about immigration — even confronting a heckler at an event in Quebec. Trudeau is likely the first prime minister to ever talk about privilege or intersectionality or unconscious bias. 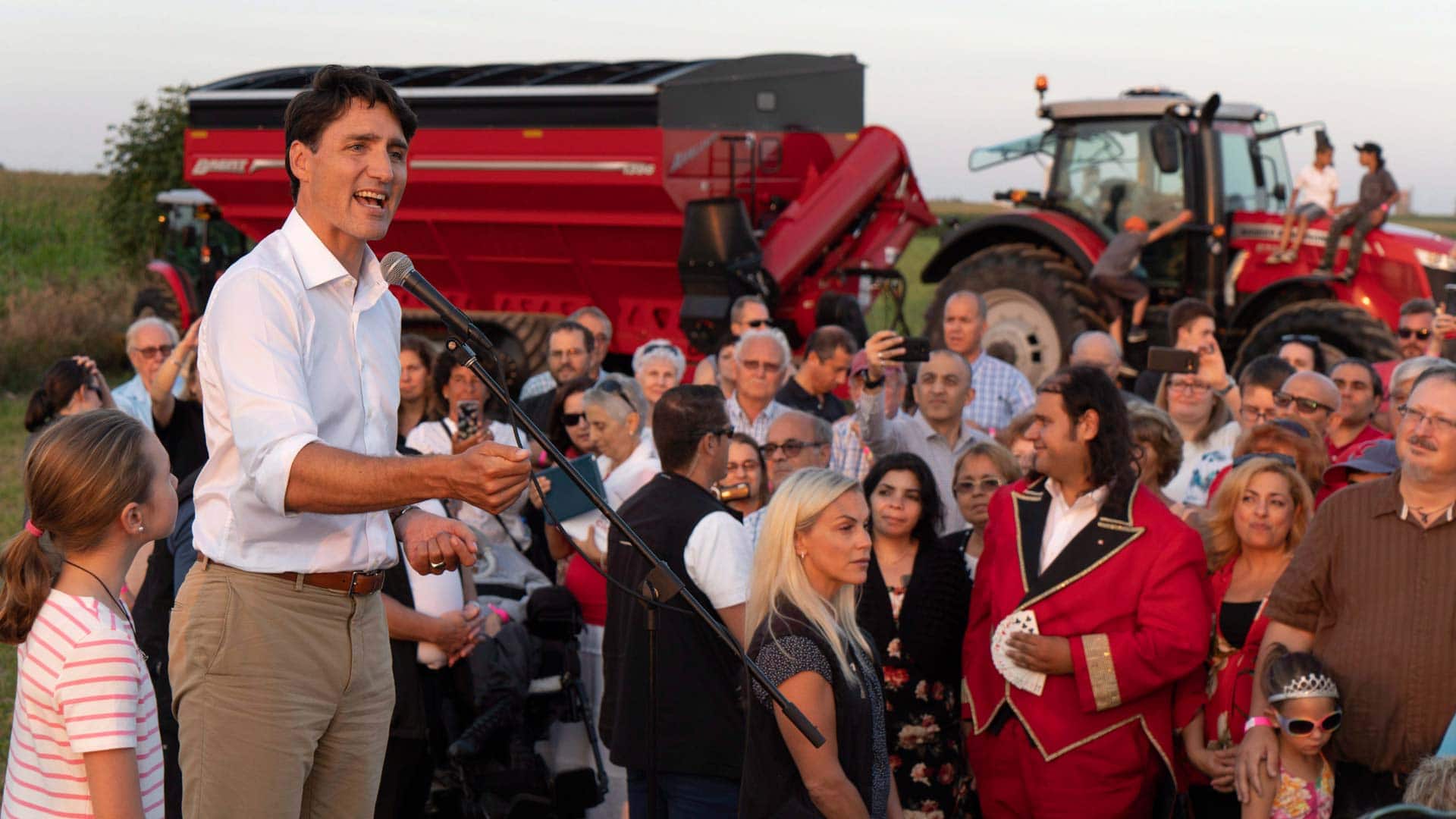 3 years ago
6:08
Here is Prime Minister Justin Trudeau's heavily scrutinized exchange with a heckler at an event in Sabrevois, Que., on Aug. 16. 6:08

"It's time we recognize that anti-black racism and unconscious bias does exist," Trudeau said at a reception for Black History Month in 2018. "It's time we hear — and believe — the stories of men and women who have been judged by the colour of their skin."

That might've been a good moment to confess his own failings. Almost any moment would've been better for him than the current one.

Human beings are complicated and flawed. But political leaders have trouble claiming such allowances.

Having invoked a high standard, Trudeau is now charged with being a hypocrite. If you found Trudeau to be arrogant or haughty before now, you are no doubt appalled by the contradiction. Having been built up as the internet's "boyfriend" and an international darling, he is being taken down a peg (and because he is such a global figure, the story is getting wide notice).

He has walked himself out on a very long pier while forgetting to ensure that the planks behind him are sound.

Do those photos invalidate what he has stood for and said over the last four years? Do those images mean he shouldn't have been so strident? Or do they mean he just should have been upfront about his own failures, and sooner?

Will he be forgiven?

Trudeau will be pressed to explain how he became who he was in 2001, how he got from 2001 to 2019, and whether he ever thought about what he'd done. There are, as many have noted this week, broader issues to address coming out of this scandal. And Trudeau could put himself into that story.

Beyond the takes of columnists and pundits (the press pack has been known to misjudge the severity of controversies from time to time), voters will weigh and judge. Trudeau might be forgiven. What those images show is already turning out to be a matter of personal perspective. But the narrative will be up for debate.

Greg Lyle, an experienced pollster, wrote this week that much will depend on whether voters view the photos as an "episodic" failure or a "thematic" one — whether the photos are interpreted as a one-off lapse or part of a larger trend that speaks to who Trudeau is and how he has governed.

Even if dismissed now as lapses from Trudeau's past, the images will linger into the future as nagging memories, either to be brought up again at inconvenient moments or to be reinforced by future missteps or other excavated sins.

Trudeau can say that who he was in 2001 is not who he is now. But who he is was already a matter of debate — poked at by Conservatives who say he's "not as advertised" and an NDP leader who says Trudeau is more "pretty words" than real change.

Trudeau didn't win the last election on his own; his party's policy promises played a role as well. Those promises can now be measured against what the Liberal government has done. And the Liberals are putting forward new proposals now.

But the idea of Trudeau is more complicated now. As might've been clear before 2015, he has shown himself to be an imperfect carrier of heavy banners. But this week has directly challenged him to account for who he was supposed to be.

Trudeau was a public figure before he was a politician and he has always been a matter of some conjecture.

"One of the first things I said when I won my nomination [in 2008] is, look, there's people out there who have incredibly high expectations, there are people out there who have incredibly low expectations," Trudeau told me in an interview earlier this year. "I'm fairly certain I'm going to disappoint everybody by being somewhere in the middle between the stratosphere and the depths."

By that measure, at least, he has lived up to expectations.