A former senior adviser in the Liberal government said Friday he wasn't surprised by photos of Justin Trudeau in blackface makeup because he encountered racially insensitive behaviour while working in the upper ranks of his government.

'How did everyone miss this for 18 years?' asks Omer Aziz, former foreign policy adviser

A former adviser in the Liberal government said he wasn't surprised by photos of Justin Trudeau in blackface makeup because he encountered racially insensitive behaviour while working in the upper ranks of his government.

Omer Aziz said the photos of Trudeau are of a piece with behaviour he saw while working on Parliament Hill with Foreign Affairs Minister Chrystia Freeland's policy team. According to his Linked In profile, Aziz held the job for seven months. He quit in 2018.

"I basically had to leave my dream job because of racist prejudices that went unacknowledged."

Aziz said that while he worked in the department, he heard staffers referring to certain communities as "ethnic vote banks." He said he was assigned to "brown files" in the department — files dealing with non-white-majority countries — and said he was subjected to "whitesplaining" by colleagues who assumed he wasn't aware of certain cultural nuances because of his skin colour.

Trudeau has been forced to answer uncomfortable questions all week after three instances of him wearing brownface or blackface as part of various costumes surfaced in the media.

The images span about a decade and a variety of situations, and show Trudeau in blackface both as a teenager and as an adult.

"What I did was inexcusable and wrong and hurt a lot of people who considered me to be an ally and that was wrong. And I am deeply, deeply sorry," Trudeau told a crowd in Saskatchewan Thursday.

Trudeau has now publicly apologized twice — but he also has repeatedly declined to state how many times he may have worn blackface. He said he was "wary of being definitive about this because of the recent pictures that came out, I had not remembered."

Aziz said almost all of his colleagues in the federal government were white and seemed unaware of subtle racist behaviour in the workplace.

"People in power above me were blind to what I was seeing," he said.

"I felt like (...) I was a character from the movie Get Out, where my reality was kind of warped and distorted. Obviously people are never racist to your face." 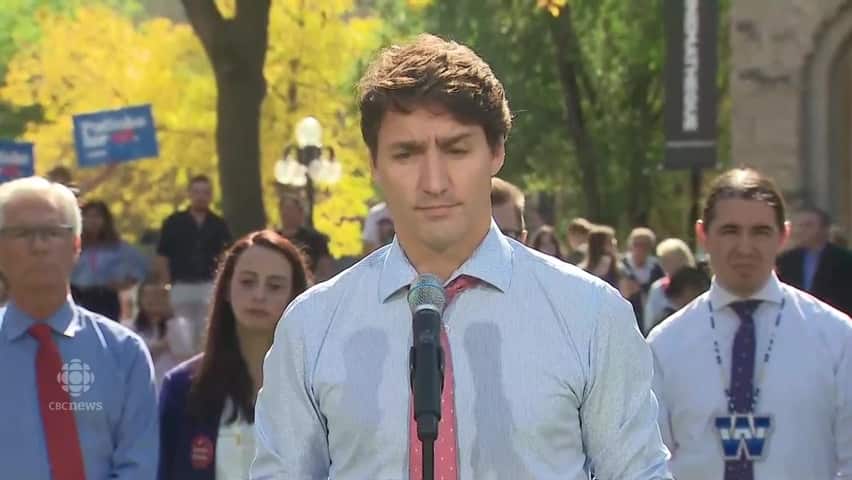 1 year ago
21:50
Liberal Leader Justin Trudeau apologizes while answering reporters' questions in Winnipeg about the emergence of images of him in blackface in Thursday. 21:50

CBC News's requests for comment from the Prime Minister's Office and Freeland's office were forwarded to the Liberal Party.

"When hiring exempt staff across government, the aim is always to identify high-quality candidates that reflect the diversity of Canada and to build more inclusive work environments," the party statement reads.

Aziz said he tried to share his concerns with Gerry Butts, then the principal secretary to the prime minister, but was ultimately unable to meet with him.

Aziz said his decision to leave the Liberal government permitted him to dodge a bullet: he believes he would have been involved in organizing Trudeau's early 2018 trip to India.

The trip turned into a colossal PR disaster for the prime minister after news emerged that a Sikh extremist had been invited to a reception at the Canadian High Commissioner's residence — and after he was roundly mocked for appearing in traditional Indian dress.

"The India trip was brownface without the makeup," Aziz said.

As for the blackface images, Aziz wondered aloud how everyone managed "to miss this for 18 years."

Aziz said voters can still count on the Liberals to be progressive in areas like climate change and the economy — but they shouldn't assume Trudeau "at every instance has been on the side of minorities and the powerless."

"Don't have any illusions and still pretend that this is a saviour ... It's not true," he said.

Trudeau also responded to questions about how voters should analyze his actions.

"I certainly hope that they will continue to support us in the work that we're doing, but they might not," he said at a media event in Winnipeg Thursday. "And I know that is something that all Canadians get to decide and they get to bring in all sorts of different factors, because every Canadian has a different way of looking at what matters to them."

If the Liberals form government again, Aziz said he wants to see changes made at the top.

"One thing I'm going to be looking forward to is if they are re-elected, do they diversify at the top, because I'm kind of tired of hearing about people talking about diversity when everyone around them looks the same."