Liberal MP Justin Trudeau said he lost his temper in the House of Commons when he swore at Environment Minister Peter Kent during a debate about the Kyoto Protocol.

Warning: This story contains graphic language that may be offensive 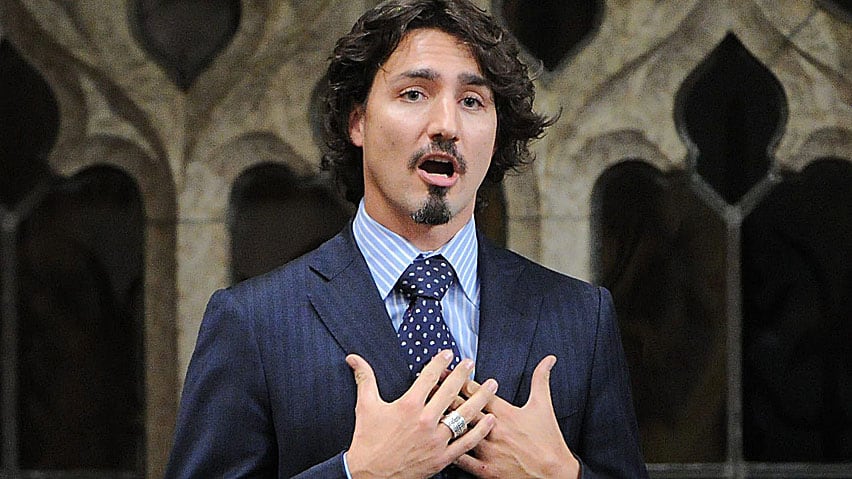 Liberal MP Justin Trudeau said he lost his temper in the House of Commons during question period when he swore at Environment Minister Peter Kent, which he later apologized for.

"I lost my temper and used language that was most decidedly unparliamentary and for that I unreservedly apologize and withdraw my remark," Trudeau said once question period had concluded Wednesday.

The commotion began when NDP MP Megan Leslie was questioning Kent about Canada's withdrawal from the Kyoto Protocol.

Kent suggested that Leslie should have been in Durban, South Africa, for the recent UN climate change conference, which prompted howls from the opposition benches because opposition MPs were banned from being part of Canada's delegation at the conference.

Kent's response was interrupted by heckling, and Trudeau could be heard shouting, "You piece of shit" at the environment minister.

This was no 'fuddle duddle'

Justin Trudeau's admittedly impertinent words in the House Wednesday can't help but draw comparisons to a notorious incident in the same place involving his father.

When pressed outside the Commons by reporters a clearly perturbed Trudeau made a joke about "lip-readers ... crying to mama" and denied saying "anything" before finally admitting "yes I moved my lips" and uttering a phrase for which he became famous.

"What is the nature of your thoughts, gentlemen, when you say 'fuddle duddle' or something like that?"

His son left no such ambiguity in apologizing for his own remarks.

Speaker of the House of Commons Andrew Scheer said the matter would be dealt with after question period and then Kent continued on with his response.

Trudeau explained that he shouted the insult because Kent had chided Leslie for not attending the conference, although the minister was the one that prevented her from going.

The environment minister said he understands "the Liberal rump is somewhat out of sorts as this government corrects one of the biggest blunders the previous Liberal government ever made," referring to the signing of the Kyoto accord. He said he wasn't that bothered by what Trudeau said but demanded that he apologize to the House of Commons. Scheer said Trudeau had already made his apology.

Leslie told reporters after question period that outbursts get attention and it's unfortunate they distract from the government’s "complete and total inaction on climate."

She said it has been difficult trying to work with the Conservatives on the environment file and that Trudeau's outburst is a sign of that frustration.

"I think it was an honest reaction from him in some ways. I certainly have bit my tongue so hard sometimes it bleeds in that House. I think he recognized that it wasn't parliamentary. Sometimes though the Conservatives and their games do get the better of us and we react," she said. "I think it was an honest reaction. He apologized for it. I just wish that the Conservatives would actually talk about issues and stop with the name-calling and these kinds of dirty tricks. It's really shameful."

Trudeau wasn't the only MP to retract a statement Wednesday during what turned out to be a lively question period. NDP MP Ryan Cleary was questioning Fisheries and Oceans Minister Keith Ashfield who rhetorically asked during his response if he looked like a bully and Cleary responded that he did.

"I merely answered his question, I would answer the question the same way if he asked it again," Cleary said after question period, initially resisting a retraction but then later giving in and telling the House of Commons he wanted to withdraw it.

Government House Leader Peter Van Loan was also asked to withdraw his comment that interim Liberal Leader Bob Rae had "checked out" on Tuesday. Rae was not in the House of Commons Wednesday and MPs are not allowed to refer to the presence or absence of another MP during question period.

Van Loan did not withdraw his comment or apologize. He said Rae held an end-of-session press conference Tuesday, before the session had in fact ended, and that's what he was referring to when he said the Liberal MP had checked out.