Justin Trudeau arrived first, walking to his seat with binders in hand. A minute later, Andrew Scheer came into the House, carrying a few pages of notes. As the new leader of the opposition arrived at his seat, he and the prime minister saw and acknowledged each other with a smile and a laugh.

Justin Trudeau arrived first, a few minutes before question period, walking to his seat with binders in hand. A minute later, Andrew Scheer came into the House of Commons from the opposition lobby, carrying a few pages of notes.

As the new leader of the opposition arrived at his seat, he and the prime minister acknowledged each other with a smile and a laugh.

Shortly thereafter, the Speaker called for oral questions and Scheer stood to a rousing hurrah from the Conservative side.

Officially, the first exchange of pleasantries between the leaders would concern this weekend's deadly attack in England, an apolitical acknowledgement of the event and the Canadian who died. Trudeau would also offer a few words of welcome on the occasion of Scheer's new position.

As MPs on all sides applauded the prime minister's statement, Scheer stood and nodded slightly to Trudeau.

Only then did the two men now set against each other get down to debating the future of the country. 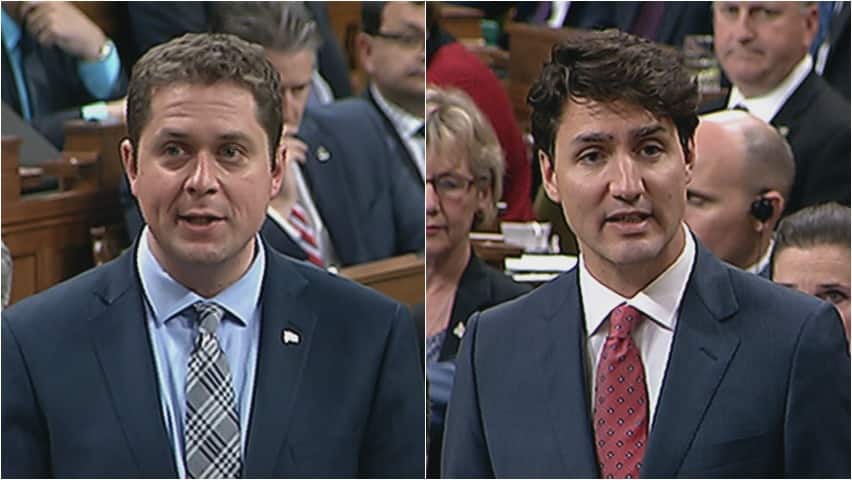 4 years ago
1:14
PM Justin Trudeau responds to Opposition Leader Andrew Scheer's question about Canada's response to the attacks in London. 1:14

Scheer predicts a boondoggle in the making

"Mr. Speaker, the prime minister is deceiving people about the infrastructure bank," Scheer charged, the mood turning suddenly, as it often must in the House. "He refuses to admit that taxpayers will be on the hook for bad projects."

Scheer demanded the prime minister clarify the line of responsibility for the government's new Crown corporation.

In keeping with his habit, Trudeau chose to not get bogged down in details, but instead enthused about the initiative in question.

"Mr. Speaker, Canadians know that we have infrastructure needs, we need to invest and that's the choice they made in the last election," he said. "They voted for a party that was ambitious about roads and investing in public transit, in green infrastructure, to build for the future, to support our communities today and in the future."

The Conservative leader charged that the prime minister's "billionaire friends" had "talked him into the infrastructure bank" and taxpayers were about to be left with the bill.

This is a "$35-billion-boondoggle waiting to happen," Scheer ventured.

"Will the prime minister," he asked, "put the brakes on this scheme or does he really want to force Canadian taxpayers to co-sign loans for the richest one per cent?"

"Mr. Speaker, we lowered taxes for the richest —"

The Conservatives howled at the stumble.

"— we raised taxes for the richest one-percent and lowered them for the middle class," Trudeau continued, correcting himself. "Which unfortunately the members opposite voted against."

He enthused about the government's commitments to funding infrastructure and how private capital might be used to build even more things.

"Mr. Speaker, the prime minister's message to foreign investors is: No credit, no problem," Scheer joked.

The odd controversy of Madeleine Meilleur

Scheer then turned then to the leading controversy in Ottawa: the appointment of a new commissioner for official languages.

It is a small wonder that such a thing has produced a prolonged controversy, a testament perhaps to this government's special ability to find trouble where it should not normally be found (see also, the prime minister's Christmas vacation).

"Unfortunately," Scheer lamented, "the position has become politicized with the appointment of a Liberal. It's ridiculous."

Trudeau attempted here to parse his own approach to appointments.

"Mr. Speaker, we set up an appointment process that is open, transparent and merit based ... We're choosing the right people, regardless of their political past.

Scheer was ready with another joke.

"Mr. Speaker," he said, "the one thing you can count on about Liberals is that eventually they start acting like Liberals."

In this case, the Conservative leader explained, the interests of a "Liberal insider" had been put before the integrity of the institution.

In response, Trudeau criticized the partisan processes and appointments of the previous government, and insisted again on his commitment to appointing "the very best people" regardless of their political affiliation.

Trudeau and Scheer preview the battle to come

It is hard to imagine either of these issues swinging the vote in 2019, particularly if that promised "boondoggle" hasn't emerged by then. And Scheer might be hard-pressed to explain what he'd do about the country's infrastructure instead, particularly if he plans on balancing the budget in 2021.

But the broad outlines of a debate might be there: the Conservatives charging that the Liberals are out of control, out of touch and arrogant; the Liberals enthusing about what they've done, what they plan to do and how decent are their intentions.

Like Trudeau, Scheer is young and seems pleasant. In the House, he seems comfortable, though he still relies on a prepared text, which detracts from the presentation. He gestures slightly with his hands and squares up to the prime minister to state his questions directly.

He could prove to be an effective opposition leader, especially if the Liberals struggle to explain themselves, as they sometimes have.

But, of course, it was just about this time two years ago that the polls showed some enthusiasm for the "best opposition leader since John Diefenbaker." And now Tom Mulcair, an edgier sort than Scheer, is stuck in the far corner of the room, playing out the string until New Democrats choose their next leader.

Before Mulcair, it was Michael Ignatieff and Stéphane Dion who failed to ascend to the prime minister's office. Indeed, in each of the last two elections it was the leader of the third party who made the greatest gains. So possibly we should all be paying more attention to the NDP leadership race.

But with Scheer in the leader's seat, the post-Harper Conservative party can finally begin to take shape and the clash of visions between Liberals and Conservatives can be renewed.

Returning to his seat, Scheer exchanged a few good-natured words with Dominic LeBlanc, the fisheries minister who sits two spots to Trudeau's left, seemingly in acknowledgement of this first clash.

There are sure to be far less civil moments in the two years (or more) to come.