That's me in the middle: Julie Van Dusen reflects on a career covering politics

Julie Van Dusen has been a journalist with CBC News for over 30 years. In that time she's been Canadians' eyes and ears in the halls of federal power, witness to some of the most important political events of the age. She announced this week that she is retiring from CBC to pursue other projects.

Julie Van Dusen has been a journalist with CBC News for over 30 years. In that time she's been Canadians' eyes and ears in the halls of federal power, witness to some of the most important political events of the age. She announced this week that she is retiring from CBC to pursue other projects.

I came to the Parliamentary Bureau a little over 30 years ago. It seems like only yesterday.

It was supposed to be temporary. I never left.

Actually, I did leave for two years in total — three surprise maternity leaves. (You try it!) Then I came back, pronto, to the peace and quiet of filing for a 24-hour news channel.

I consider myself one of the luckiest reporters in Canada. I have had a career on Parliament Hill — an exhilarating career, in a place I truly love.

Walking up every morning to go to work at Centre Block, the most beautiful Neo-Gothic building in the country, was a thrill on its own. Add to that the privilege of covering the hurly-burly of Canada's democracy, and you can understand why I often wanted to pinch myself over my good fortune.

A childhood on the Hill

My dad spent 40 years on Parliament Hill, so it always felt like a second home to me. My mom, an artist, would often paint the Parliamentary buildings. She would load us into the station wagon and we would fight and swat at each other in the back while she tried to create in the front seat. One of her paintings hangs in the Speaker's Hallway. I pass it often.

My dad would take us kids to the Hill — all seven of us — for different events, including Christmas parties. I remember running around the Foyer as a toddler, screaming with excitement. Who knew I would get paid to do the same thing years later?

Making a living pursuing and scrumming so many politicians in that same venerable location. Never, ever getting sick of it, never getting bored, always learning. At one point, along with my dad there were five Van Dusens roaming about the Hill. So much fun!

I have covered so many history-making moments in Canadian politics, starting from the day I came to the Parliamentary Bureau in 1988, during the "free trade" election. A series of seismic events in Canadian politics followed: the Meech Lake Accord, the birth of the Bloc Québécois and the Charlottetown Accord. It was one big constitutional roller coaster.

I moved briefly to Montreal in 1995 to cover the heart-stopping sovereignty referendum and watched mesmerized as Lucien Bouchard, who had recently survived an attack of flesh-eating disease, turned the whole thing on its ear over a Thanksgiving weekend. It is a time I will never forget.

I've seen so many party coups up-close as leaders were handed their heads. As kids, we would get the inside scoop from my father about the mutiny against John Diefenbaker.

The end result is always the same. When enough people want you to go, they'll find a way to make your life miserable.

I've seen waves of people flocking to the Hill to protest or to advocate for an cause, on the front lawn and in the corridors.

A society in flux

I've witnessed tectonic shifts in society, from the abortion law going down to defeat in the Senate, to the legalization of same-sex marriage, to the government giving the green light to recreational marijuana use.

I've talked to every Canadian political figure you can name over the past 30 years, and many famous non-politicians as well. (I can still hear Mother Teresa's pithy comments on family planning.) 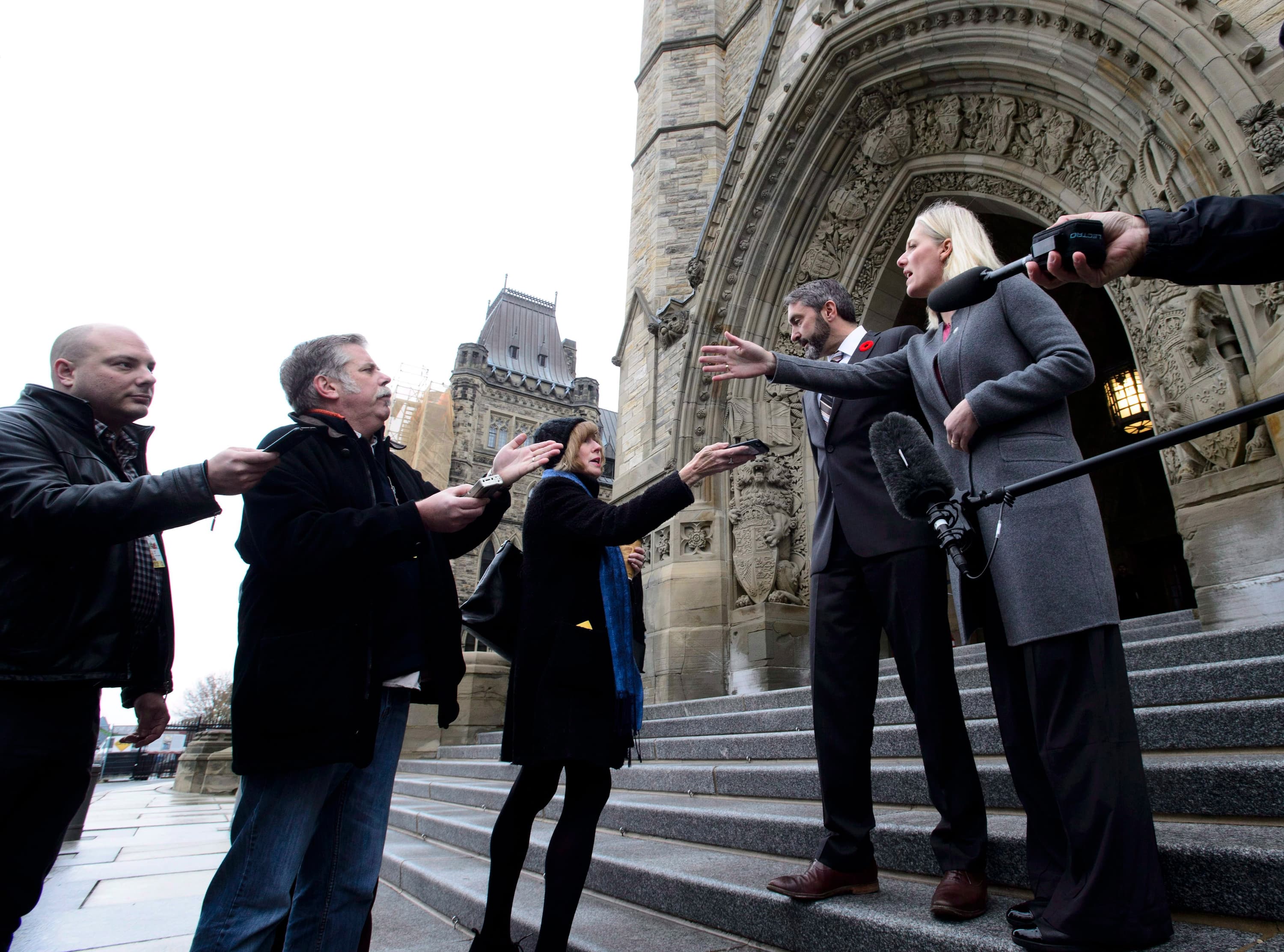 6 months agoVideo
0:55
After more than 30 years covering politics from Parliament Hill, CBC reporter Julie Van Dusen announced this week she is moving on to other projects. Here are some highlights from her relentless work as a journalist. 0:55

I've seen politicians struggle behind the scenes with big problems, divorces, mental health issues, unruly kids and the angst of being away from their families. I feel so privileged to have known so many of these men and women.

They're not just suits going in and out of question period. They are so much more than just names on a ballot. They are risk-takers, the ones who throw themselves into the emotional cauldron and brutal machinations of politics, and give up much of their personal lives, to make our democracy work.

The art of the scrum

I've loved covering Canadian politics for so many reasons — but especially for our method of buttonholing politicians. Thanks to the wizardry and agility of our amazing cameramen, I've been in walking-backward scrums, running scrums, elevator scrums, escalator scrums, and one flinging-myself-onto-the-hood-of-a-moving-car scrum. (My kids call me "scrummy mummy.")

Like so many of us, I was jolted by the 2014 shooting on the Hill. Your workplace never seems the same after you hear gunshots and smell gunpowder near the scene of your last scrum, while lying on the floor of a nearby office for eight hours hoping some armed madman doesn't storm through the unlocked, furniture-barricaded door that's your only protection.

Over the years, I've been touched and gratified by how we at the CBC look after one another. Yes, we arrive every day to an adrenaline rush of deadlines. But when the chips are down, when a relative has died or someone is going through a hard time, we rally around, we embrace and nourish each other with good wishes, flowers and casseroles.

I am extremely grateful for the CBC's team of professionals — so good at getting the news on the air and meeting impossible deadlines.

So thank you, all of you — the bosses who became my mentors, the cameramen, editors, producers, reporters, researchers, resource specialists, sound techs and writers.

I have learned so much from all of you, shared so many laughs. (And I would like to officially apologize now for all the times my hair was in the shot.)

I will never stop loving the CBC, public broadcasting and all that it's taught me. Most of all, I will always cherish and be so grateful for the lifelong friendships I have made coast to coast to coast.

And now, I'm off. I have deadline-driven projects that I want to tackle in the coming months. Keep up the rock-solid and compassionate coverage of the pandemic and all of the other news. I will be watching, listening and reading — and most likely pining for the action.

Julie Van Dusen has covered politics for more than 30 years in CBC's Parliamentary Bureau in Ottawa.