To begin her new life of formal authority, Payette eschewed the formality of a script. She neither sat on her throne, nor stood behind a lectern. She just stood there and talked.

Except for a card she referred to for the customary words of greeting that are required at these sorts of events, Julie Payette addressed her installation as the 29th Governor General of Canada without a prepared text.

Perhaps being strapped to a 45-metre-long rocket and blasted into space changes one's understanding of risk.

But to begin her new life of formal authority, Payette eschewed the formality of a script. She neither sat on her throne, nor stood behind a lectern. She just stood there and talked.

Over the course of 20 minutes, Payette was light and aspirational and at ease. There were a few appeals to history — including her own ancestry, which she traced back to this land in the 17th century — but there was no referencing of scholars or poets. 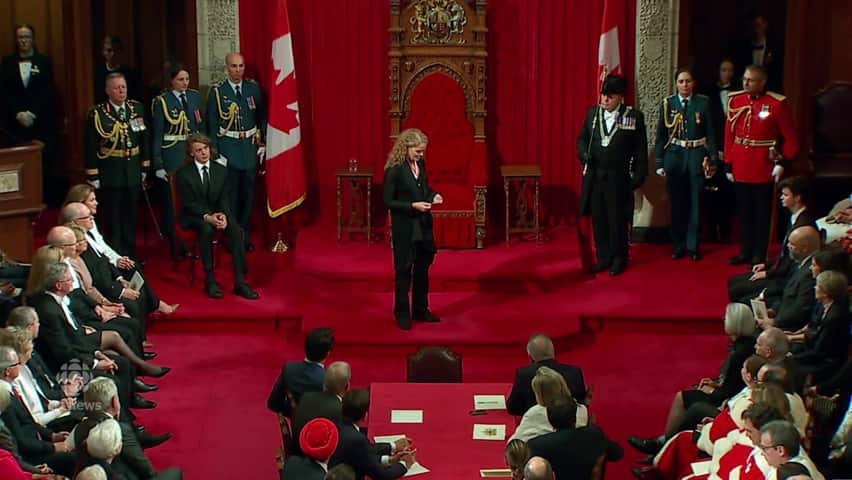 Payette will 'do what is right for the common good'

3 years agoVideo
0:51
Gov.-Gen. Julie Payette says her mandate is "to do what is right for the common good," adding that anything can be accomplished as long as people are willing to work with others. 0:51

On a banner day for space puns — the prime minister responsible for at least a couple in his opening remarks — there were attempts at poetry.

"There's many eminent scientists in this room, and lots of great high-flyers," Payette said, with two fellow astronauts, Roberta Bondar and Marc Garneau, seated nearby, "and they would tell you that we are inextricably bound by the same time-space continuum and ... we're all on board the same planetary space ship. But together we can move mountains."

The International Space Station was presented as a symbol of what can be achieved when people collaborate across cultures and disciplines. And from space, she noted, there are no borders.

A speechwriter might've sharpened and reinforced the points and done something about that mixed metaphor, but Payette will have other opportunities to visit the Senate and read speeches that have been written for her (as the official reader of the speech from the throne, that's a significant part of her job).

With pomp and circumstance and a very regal performance of God Save the Queen, it was at least a nice change of pace from Parliament's typical fare, not to mention recent world events.

Her installation only reinforced the sense that she's precisely the sort of governor general one should have expected Justin Trudeau to pick.

Already it was fitting that a Star Wars nerd would pick an astronaut. But in her remarks, there were also familiar principles and ideas: collective effort, diversity, reconciliation, youth, ambition. She enthused about science and making decisions based on data and evidence.

"We are the true north, strong and free," she said. "And we should continue, all the time, to look out for those who have less, to stand for those who can't, to reach out across differences, to use our land intelligently, to open our borders and welcome those who seek harbour and never, ever cease to be curious, ask questions, and to explore and search.

"And we shouldn't forget to be happy about celebrating who we are and what we'd like to become." 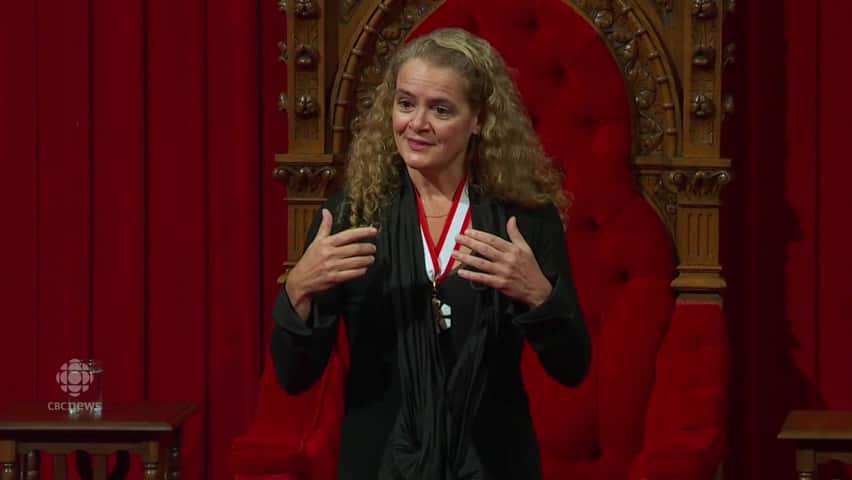 3 years agoVideo
1:11
Gov.-Gen. Julie Payette acknowledges the role her parents played in her life, and tells Canadians to dream big and work hard. 1:11

She didn't quite lay out an agenda for the next several years, but no doubt some of her role will simply involve being the example she already is.

Amid the ceremonies, awards and official tours to come, the most interesting bits will be unguarded moments (every governor general ends up saying something controversial) and matters of emphasis.

On Monday, for instance, she mentioned climate change, migration and nuclear proliferation as issues of global concern. How far might Payette push any of those concerns? Could she host a conference on climate change? Would that be considered too political?

All of this business of the governor general is, of course, a bit quaint. An individual appointed by the prime minister and set up in a sprawling old house to represent a Queen who lives across the ocean.

Payette's signature is required to enact laws. Officially, she is commander-in-chief of the nation's military. Quietly, she is responsible for preserving our democratic order. And she gets an official coat of arms (a cool-looking one with lynx and an astronaut helmet).

Were you starting a country from scratch tomorrow, modern ideas about democracy and legitimacy would likely make such a system unthinkable. But Canada has made it this far.

Our acting head of state is an astronaut. With or without notes, she now has an immense platform from which to try to say something without saying too much. In part, she will say something simply by standing there.