On the heels of denying permission for the proposed Keystone XL pipeline project, U.S. Secretary of State John Kerry says there's no urgent need for a new Canada-U.S. pipeline in an interview with CBC's Rosemary Barton. 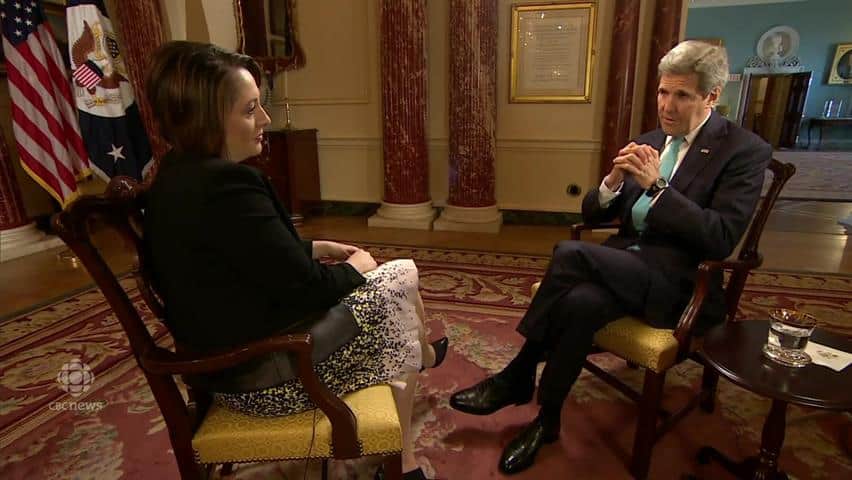 5 years agoVideo
10:40
U.S. Secretary of State John Kerry discusses a wide range of issues from pipelines to ISIS to strengthening ties with Russia in an interview with host Rosemary Barton 10:40

"We have some 300 pipelines, it's not as if we're pipeline-less," Kerry told CBC News Network's Power & Politics host Rosemary Barton in an interview that covered topics ranging from climate change, refugees, the fight against ISIS and both countries' relationship with Russia.

"The reality is we will be pumping oil and gas for some years to come, but all of us, every country, needs to move as rapidly as feasible ... to a low carbon footprint."

Kerry, who will hold a bilateral meeting with Prime Minister Justin Trudeau on Thursday as part of this week's official visit to Washington, said a decision on any future north-south pipelines would be merit based, but added his administration is trying to move off high-carbon sources of energy. 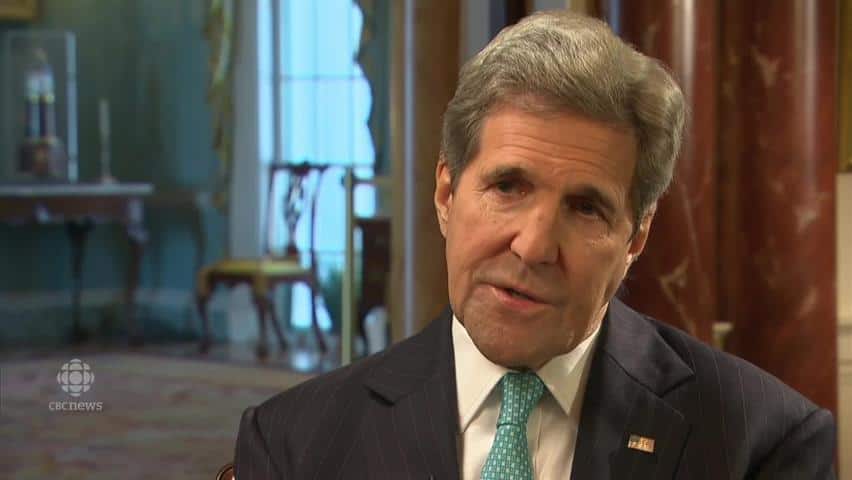 Secretary of State John Kerry: It's not as though we're 'pipeline-less'

"Canada has to make its own decisions as to what the mix is going to be, but all of us have a responsibility to move towards [an] alternative, renewable, low-carbon footprint and literally save the planet from this devastating track that we're on."

Obama said the State Department rejected the proposed pipeline because of environmental concerns, adding that it would not make a meaningful long-term contribution to the U.S. economy.

Former prime minister Stephen Harper was a vocal proponent of the project, once calling it a "no-brainer."

​Canada's new ambassador to the United States described the fight over the Keystone XL pipeline as equivalent to that of a familial relationship gone awry.

"There's no question that that particular dispute sucked all the oxygen out of the room in terms of the relationship," David MacNaughton said in an interview with CBC Radio's The House.

"It happens in personal relationships as well as when you have good friends, or your family, sometimes when there are irritants you tend to focus on the irritants and then they become more irritating."

But Kerry was positive about Canada-U.S. relations since the Liberals took power. He said he has "no doubts" Trudeau's official visit to Washington will go smoothly.

"I think President Obama and Prime Minister Trudeau have an enormous amount in common," he said. "They share a lot of common vision about where the world needs to go. "

When it comes to Canada's changed role in the fight against the Islamic State in Iraq and Syria, the onetime presidential candidate said the U.S. has "great respect" for Trudeau's decision.

Canada has ceased all coalition airstrikes against ISIS and has beefed up its military efforts, including the number of special forces deployed on the ground to train Iraqi forces for the next two years

"Canada already is helping the coalition," said Kerry, when asked how Canada could aid diplomatically. "Canada is making an enormous contribution other ways."

One of those ways is Canada's resettlement of 25,000 Syrian refugees, a decision that faced scrutiny from a U.S. Senate committee in Washington last month.

"I think it's fair to say all of the agencies concerned with providing the security of the country and screening people wanted to make sure that the push to do 25,000 people wasn't going to compromise anything. I think people feel confident that they worked out ways to guarantee," Kerry said.

The secretary of state said people feel "confident" with the co-operation level between the U.S. and Canada.

"The fact is refugees coming in, not just to Canada but coming into the United States, go through an absolutely exhaustive background check, much more profound than normal travellers," he said.

"Obviously everybody hopes that that's going to be adequate to do the job, but I applaud Canada's humanitarian gesture."

Kerry has spent much of his term as secretary of state sharply criticizing Russia for its actions in Ukraine and Syria. Still, he said it's useful for countries like Canada to re-engage with Russia, something Foreign Minister Stéphane Dion has said he's willing to do.

"We believe it's important, but I mean every country again has to make its own decisions about its own security needs and its own policies," said Kerry.

"That said, President Obama believes, and I believe, that engagement is important. You don't lose anything by asking the right questions, having the right conversation and exploring what the possibilities might be."

With files from the CBC's Jennifer Chevalier