Foreign Affairs Minister John Baird took aim Tuesday at "offensive" and "mean-spirited" statements on the website of an organization that gets federal funding to do aid work in Uganda. 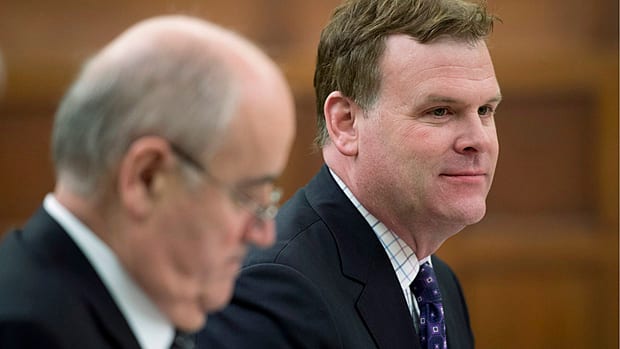 8 years agoVideo
2:06
Foreign Affairs Minister John Baird took aim Tuesday at "offensive" and "mean-spirited" statements on the website of an organization that gets federal funding to do aid work in Uganda. 2:06

Foreign Affairs Minister John Baird took aim Tuesday at "offensive" and "mean-spirited" statements on the website of an organization that gets federal funding to do aid work in Uganda.

The Canadian International Development Agency is providing $544,813 over three years to Christian Crossroads Communications Inc. to provide water and sanitation in Uganda, a country that is considering the death penalty for gays and lesbians.

A page from the group's website that has been removed, but is still available as a cached version, calls homosexuality and transvestism perversions and lists them along with pedophilia and bestiality.

Baird told MPs on the foreign affairs committee that those sentiments are offensive. He said the government completely rejects what was on the webpage.

"The suggestion that anyone politically or in the public service level at CIDA, at [the Department of Foreign Affairs and International Trade], would share or endorse the kind of offensive and mean-spirited statements that appeared on a website, I want to categorically on behalf of the government say that we completely reject those sentiments," Baird said.

"And I can say that if there's, you know, any evidence that anyone receiving a grant from the government of Canada is using that money to spread hateful or mean-spirited or offensive practices, it will be put to an end immediately. And those [sentiments] are not the views of the government."

Fantino said on Twitter Sunday night that the funding would be reviewed before the next payment was sent to the organization. A spokeswoman for CIDA said in an email Monday night that the review was complete and Christian Crossroads complied with the terms of its funding agreement.

Uganda has been shaken by virulent homophobia in the past; Baird has condemned plans for an anti-gay bill there that could potentially include the death penalty for homosexuals. He's also made speaking out in favour of human rights, including gay rights, a feature of many of his speeches.

Baird says one of his and Fantino's most important responsibilities is to promote Canadian values.

"Canadian values are accepting, they're tolerant, they welcome diversity. One of the great gifts that Canada has is to promote pluralism around the world," Baird said. "We respect religious freedom. At the same time, Canadian taxpayers dollars will not be used to spread hate or intolerance. That is completely unacceptable."

CIDA spokeswoman Amy Mills says that CIDA has disbursed $388,807 of the amount pledged to Christian Crossroads.

"There remains $156,006 to disburse for this project," she said in an email. "We reviewed the [Christian Crossroads Communications Inc.]'s actions related to the CIDA-funded project and have determined that it complies with the terms of the contribution agreement.

"This involved reviewing the most recent progress and financial reporting. In addition, a previously planned monitoring mission is currently underway in Uganda. The review will be concluded upon the completion of this mission."

In question period, New Democrat MP Hélène Laverdière directed her questions to Baird rather than Fantino.

"Funding of Crossroads amounts to tacit support for an openly anti-gay organization …. Does he think that this is the type of message that the government wants to send to Canadians and to the world?"

Fantino answered the question rather than Baird, repeating the only statements he's provided since questions first surfaced.

"I can assure the member opposite that CIDA programs are delivered without discrimination or bias and that is the case here …. To assert otherwise is absolutely untrue," he said.

Laverdière tried again, this time quoting some of Baird's words from the committee that morning in her question.

"This group's views are inappropriate, offensive and contrary to Canadian foreign policy goals …. Does the minister truly believe that it's acceptable to fund groups with homophobic policies and give them credibility?" she asked.

Fantino replied that the review showed that Crossroads delivers projects effectively and without bias.

Laverdière said during question period on Monday that a number of groups which the government dislikes have been cut off, but "religious groups that promote their ideology have Conservative connections."

"This is absolutely bogus," Fantino retorted. "Religion has nothing to do with any of that."

CIDA says Crossroads has been funded since 1999.

Last year, Fantino made a point of arguing that groups who receive funding can't count on getting it indefinitely.

"Programs that we enter into are not for life. We don't fund NGOs for life. Things change and we adjust accordingly," he said last November.