Joe Oliver won't table his next budget for two more weeks, but the federal finance minister announced today that he'll table a second bill this month — one to force future governments to keep their books in the black. 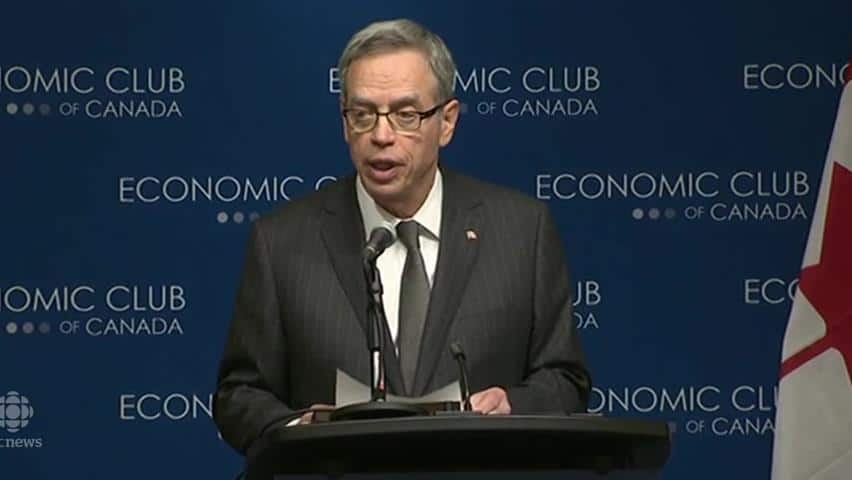 Joe Oliver won't table his next budget for two more weeks, but the federal finance minister announced today that he'll table a second bill this month — one to force future governments to keep their books in the black.

The 2015-16 budget is expected to be the Harper government's first balanced budget in eight years.

Speaking to the Economic Club of Canada in Toronto, Oliver said the legislation would include:

Contrary to recent suggestions that his next budget might include some new vote-boosting stimulus spending, the finance minister said Canada "could not and cannot spend our way to prosperity."

Although his government brought in a major economic stimulus plan in 2009, "at a time our country needed it urgently," Oliver said, "The crisis is over, and so is the time for deficit-creating stimulus spending.

"But there are risks out there, so we must remain fiscally strong," he said.

Oliver said the Harper government will return to balance "without the kind of reckless spending cuts we lived through in the '90s. No instability, no hack and slash."

Like statements from both Oliver and Prime Minister Stephen Harper did last Thursday, the finance minister's speech repeated now well-worn Conservative warnings about the importance of not returning to the deficits seen under Pierre Trudeau's government and Liberal Leader Justin Trudeau's desire now to "spend money we do not have."

"We will never repeat those mistakes," he vowed again. 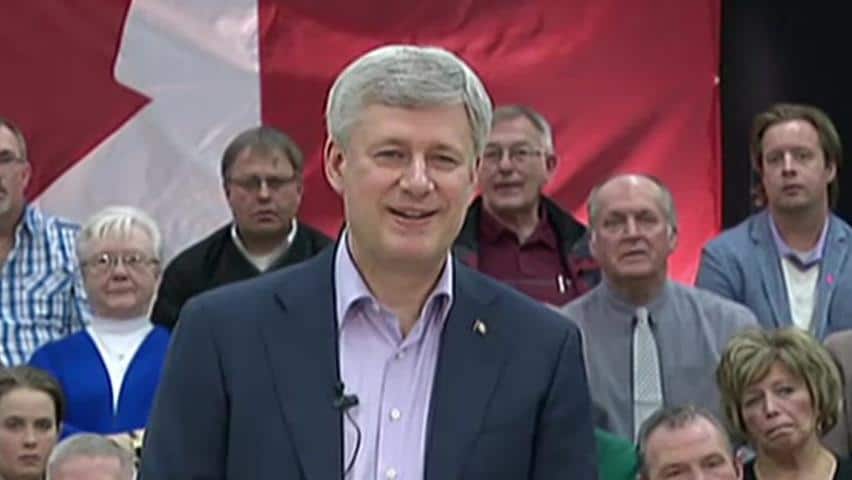 6 years agoVideo
1:44
Prime Minister Stephen Harper confirms that his government intends to balance the federal budget in 2015-16, after an announcement in Miramichi, N.B. Thursday. 1:44

Even if balanced budget legislation is tabled quickly after Parliament's Easter break, there are limited weeks for legislation to pass through all stages in both the House of Commons and the Senate without unanimous consent from all parties — something that appears unlikely, based on the comments from Oliver's critics Wednesday.

In a sign of the pre-election campaign already underway this spring, Liberal finance critic Scott Brison and the NDP's urban affairs critic Matthew Kellway scrummed with reporters on site after the speech.

Brison called it "absolutely ludicrous" that the Harper government was trying to appear on the eve of an election call as "born-again budget balancers."

"It's laughable. It lacks credibility," he said, adding the Conservative record was "miserable," after having spent "into oblivion" the $13-billion surplus it inherited from the previous Liberal government.

Brison said that even before the fiscal crisis, the Harper government's fiscal policy put it on the edge of deficit. It then tabled seven consecutive deficits, spending on things like self-promotional advertising.

But would the Liberals support such a bill?

"Liberal governments in the past haven't needed balanced budget legislation to balance budgets," he said.

Kellway characterized the announcement as "full of bitter ironies" from a minister who "hid under his desk, paralyzed" after the drop in oil prices.

The New Democrat said the proposed legislation would dictate to future governments how to respond to future circumstances, based on "arbitrary and politically motivated criteria."

It's "the last act of a government that knows it's on its way out, trying to tie the hands of its successors," he said.

When reporters asked the NDP critic about the Tories focusing on Trudeaus past and present, Kellway said "those guys can have their squabbles."

"That for us is old-style politics," he said.

Oliver did not take questions.

Throne speech pledge not yet kept

The "balanced budget bill" was promised in the 2013 speech from the throne.

The financial crisis of 2009 would likely have qualified as the kind of recession where such a law would tolerate red ink.

That year the government's budget included a $56-billion deficit — the largest in Canadian history. Oliver characterized the "shovel-ready" stimulus program that caused it — dubbed the "Economic Action Plan" — as massive, but not excessive, and "something the opposition urged us to adopt."

A number of provinces introduced balanced budget legislation but were forced to either break it or repeal it when economic circumstances changed.