Jim Flaherty, Canada's former finance minister, is dead at age 64. The Conservative MP, who had battled health problems, stepped down from cabinet less than a month ago, citing a plan to return to the private sector. Ottawa police are addressing the media - watch our livestream.

"My partner and my friend," Prime Minister Stephen Harper says of Jim Flaherty 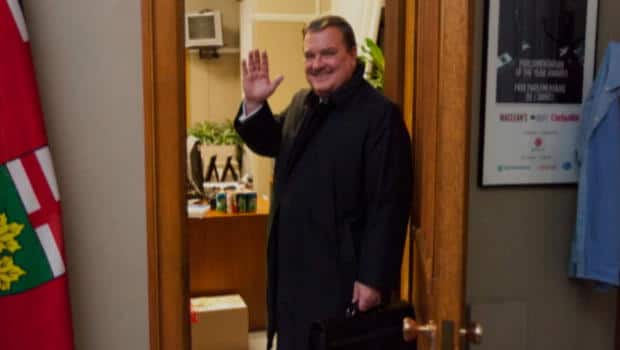 Jim Flaherty's colleagues, political opponents and friends are remembering him for his commitment to public service, his playful sense of humour and his devotion to his family.

Flaherty's wife, Ontario MPP Christine Elliott, asked for privacy on behalf of her and the couple's triplet sons, John, Galen and Quinn.

"We appreciate that he was so well supported in his public life by Canadians from coast to coast and by his international colleagues," Elliott said in a statement.

Prime Minister Stephen Harper, speaking to Conservative MPs and senators, called Flaherty — until last month, his only finance minister — his friend and partner.

"This comes as an unexpected and a terrible shock to Jim's family, to our caucus and to Laureen and me," Harper said, as his wife, Laureen, wiped tears from her face.

A source close to the family told the CBC's Evan Solomon that Flaherty died of a massive heart attack. Emergency services were called to Flaherty's home in Ottawa at 12:27 p.m. Thursday.

Conservative MP Kellie Leitch, who lives in the same building, was administering CPR when paramedics arrived, according to sources. Leitch is a pediatric surgeon who co-chaired Flaherty's campaign for the Ontario PC leadership. Flaherty was her friend and mentor.

Flaherty had battled health problems in the months leading up to his resignation, most publicly, a painful skin condition called bullous pemphigoid. But Flaherty had also experienced a medical issue during a Conservative caucus meeting some time in the last eight months. He was attended to by Leitch on that occasion as well.

MPs suspended the House of Commons just before the daily question period Thursday, around 2:15 p.m. ET, as news of Flaherty's death made its way through Parliament Hill. NDP Leader Tom Mulcair moved for the adjournment.

"After consultations among House leaders, there is general agreement the House will now suspend," Speaker Andrew Scheer told MPs.

The flag on the Peace Tower was lowered to half-mast in Flaherty's memory and Ontario's provincial legislature adjourned early. Flaherty was a member of Queen's Park in Toronto for 10 years.

G20 finance ministers, including Canada's Joe Oliver, are meeting in Washington, D.C.. They will start their evening with statements on Flaherty's death.

Opposition MPs crossed the floor to shake hands with Conservative MPs and offer their condolences. Some hugged each other.

An hour later, Conservative caucus members were gathered in a room on Parliament Hill to hear Harper's statement and reminisce. Harper had been scheduled to meet with the visiting president of Peru in the room.

Many senators and MPs were visibly upset, wiping tears from red-rimmed eyes. Some gathered to comfort Leitch.

1 of 0
Leitch said in a statement that Flaherty had encouraged her to get involved in politics.

"He was my champion. Canada has lost a giant and our government has lost one of its most respected and capable members," she said.

"Jim’s family meant the world to him and he took great pride in telling his colleagues of their successes and accomplishments. My heart breaks for them and words cannot express what they must be going through."

Treasury Board President Tony Clement, who started working with Flaherty when they were members of Ontario's legislature more than two decades ago, tweeted his grief.

"Just crushed at the loss of my colleague and friend @JimFlaherty. We spent 25 years together in public life. An Irish lion is gone," Clement said on Twitter.

Mulcair, often a fiery opponent of the Conservative government, made an emotional statement outside the House.

"Catherine and I want to express to Christine Elliott our profound sadness at the departure of our friend Jim Flaherty," Mulcair said, his voice breaking.

"We share in their loss. We're very, very sorry for their loss. Jim Flaherty was an extraordinarily dedicated public servant," Mulcair said.

In a statement, Foreign Affairs Minister John Baird said Flaherty had been his mentor at Queen's Park, Ontario's legislature.

"I could always rely on Jim to be a devout friend through tough times, and an encouraging figure through good," he said.

Toronto Mayor Rob Ford, a family friend of Flaherty's, tweeted his condolences to Elliott and said he was devastated.

"The Ford family is heartbroken," he tweeted.

Liberal Leader Justin Trudeau was on a plane to Vancouver when the news broke but tweeted his reaction after landing.

"Like all Canadians, I join in expressing my sadness at Jim Flaherty’s passing. My sincere condolences to @chriselliottpc and his children," he said.

Green Party Leader Elizabeth May said MPs were all in shock. "I don't think there was anyone better loved across party lines."

New Democrat MP Charlie Angus recalled being in Rome with Flaherty, relaxing with a couple of beers.

"He looked like a little altar boy, he was so proud to be in Rome," Angus said.

"You could differ with him, but you never ever doubted his absolute commitment to serving the people of Canada," Brison said.

Bruce Heyman, the new American ambassador to Canada, noted Flaherty's eight years in "one of government's most demanding roles."

"That he did so during challenging economic times makes his achievement all the more impressive," Heyman said in a statement.

At the time he stepped down from cabinet less than a month ago, Flaherty said he planned to eventually return to the private sector.

His final tweet as finance minister, announcing his departure, was his last: "It has been an honour to serve Canada. Thank you for the opportunity," it said.