Alberta Premier Jason Kenney has visited Ottawa with a detailed plan for federal support that he says will help his province grapple with a prolonged commodity price slump that has left the economy reeling.

Alberta Premier Jason Kenney is in Ottawa today with a detailed plan for federal support he says will help his province grapple with a prolonged commodity price slump that has left the economy reeling.

Speaking at a lunchtime reception in Ottawa, Kenney said for decades Alberta has been an outsized contributor to the Canadian economy and the federal treasury, and now it's time for Ottawa to lend some support by implementing a five-point plan Kenney has dubbed the "fair deal for Alberta."

"We've have been working for Ottawa for too long; and it's about time Ottawa started working for Alberta," Kenney said. "Ottawa needs to stop making it harder for us to jump-start our economy."

Kenney said he is a patriotic Canadian and he doesn't subscribe to the separatist sentiment emerging from the Wexit movement, but he understands why so many people in Alberta and Saskatchewan feel isolated from the federation.

Kenney said many western Canadians bristled when Prime Minister Justin Trudeau said in the last election campaign that he'd be a leader who will "fight the big oil companies."

Chief among Kenney's demands is a promise to set a "firm, fixed and fast deadline" for the completion of the Trans Mountain expansion pipeline project. The expansion, which will nearly triple the amount of Alberta oil moving to the B.C. coast, has been beset by years of delays and legal wrangling. The Crown corporation-owned company building the line began laying pipe last week but a pending Federal Court of Appeal decision could further stymie construction.

Kenney said he wants Ottawa to encourage Indigenous equity in the project. Indigenous people will be the "greatest beneficiaries" of the project through employment and support payments to affected communities. Indigenous groups in B.C. have been leading the legal fight against the $7.4 billion project. 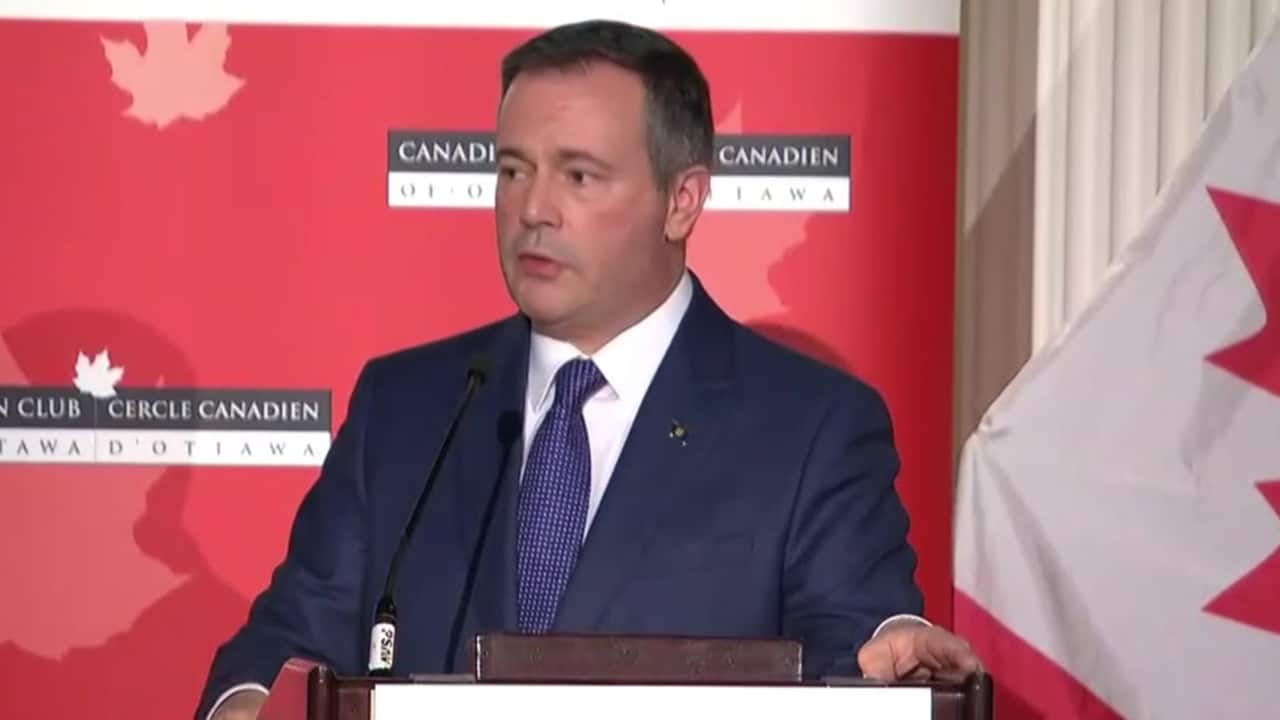 11 months ago
2:15
Alberta Premier Jason Kenney, speaking to the Canadian Club of Ottawa today, addresses feelings of western alienation and outlines Alberta's demands for the federal government. The Premier, who says his 'patriotism will never be conditional', will meet Prime Minister Justin Trudeau on Tuesday. 2:15

The program, which is administered by Finance Minister Bill Morneau, provides financial assistance to any province faced with a year-over-year decline in its non-resource revenues greater than five per cent.

Raising the cap on assistance

However, the money available to eligible provinces is capped at $60 per resident — something Kenney said is inadequate given the size of the budget deficit the province is facing after oil prices cratered.

"There are no caps on transfers out of Alberta when times are good, so we don't accept that there should be a cap on the one program designed to help us when times are tough," Kenney said.

All the country's provincial and territorial leaders agreed last week to back Alberta in its bid to raise the cap on this program, which Kenney has called an "equalization rebate," but also to send retroactive payments to Alberta for the last four years.

The third demand is for Ottawa to repeal Bill C-48, which forbids crude-laden ships from docking at ports in the B.C. north. He said the legislation unfairly targets Alberta and severely limits pipeline export capacity.

Kenney is also seeking a "substantial amendment" to Bill C-69. He said his principal concern is with the legislation "projects list," the criteria Ottawa uses to determine which proposed natural resources developments should go through a federal environmental review.

Under the legislation passed in the last Parliament, Kenney said, the Liberal government has created a "bureaucratic morass" and even cleaner energy projects design to lower greenhouse gas emissions — like transitioning power plants from coal to natural gas — are being held up by the new review.

Kenney wants Ottawa to exempt some projects that fall under provincial jurisdiction — most importantly oilsands projects in Alberta — from a mandatory federal review. The federal government has said it would consider exempting new oilsands developments if Kenney maintains a cap on emissions from the sector.

The fourth demand is for Ottawa to expand flow-through shares, a financial instrument used by resources companies to raise capital, so that firms can raise more money to build developments like carbon capture projects or to help pay for the decommissioning of spent oil and gas wells.

Lastly, Kenney wants Ottawa to accept Alberta's methane reduction regulations. The province has said its plan to curb methane from the oilpatch is just as effective as, but less costly than what the federal government has proposed to impose on the province.

Kenney said Alberta's demands of Ottawa are not "selfish or parochial," but come at a time of genuine unease. An estimated 80,000 high-paid energy workers have lost their jobs as a result of the oil price slump and constrained pipeline capacity, he said.

Manitoba MP Candice Bergen said the government is "turning a blind eye to half this nation."

But Deputy Prime Minister Chrystia Freeland said: "I would like to assure the members opposite and all Canadians that our government takes very seriously the economic challenges that the Prairies are facing."