Former CBC political reporter James Cudmore became a focus of question period Monday as the Conservative opposition pressed the Liberals over their decision to hire him as a policy adviser after he broke a sensitive story about a major shipbuilding contract for the navy.

'Was his position created to reward for his great reporting or were the Liberals trying to shut Cudmore up?'

Former CBC political reporter James Cudmore became a political football in question period Monday as the Conservative opposition pressed the Liberals over their decision to hire him as a policy adviser after he broke a sensitive story about a major shipbuilding contract for the navy.

"Mr. Speaker, I have a question for the minister of national defence. Can he tell us on what date former CBC journalist James Cudmore was offered a job in his office as his senior policy adviser?" asked Conservative House Leader Candice Bergen.

Defence Minister Harjit Sajjan replied, saying that he did not know the exact date but would find out and get back to Bergen soon.

When Bergen asked whether Cudmore was offered the job before or after Nov. 20, 2015, Sajjan said he could not comment on an ongoing court case.

Further questions from Conservative MPs James Bezan and Alain Rayes were referred to Karen McCrimmon, parliamentary secretary to the minister of Public Safety and Emergency Preparedness, who took to reading into the record a passage of Commons procedure that prevents MPs from commenting on matters before the courts.

"Was his position created to reward for his great reporting or were the Liberals trying to shut Cudmore up?" Bezan asked. 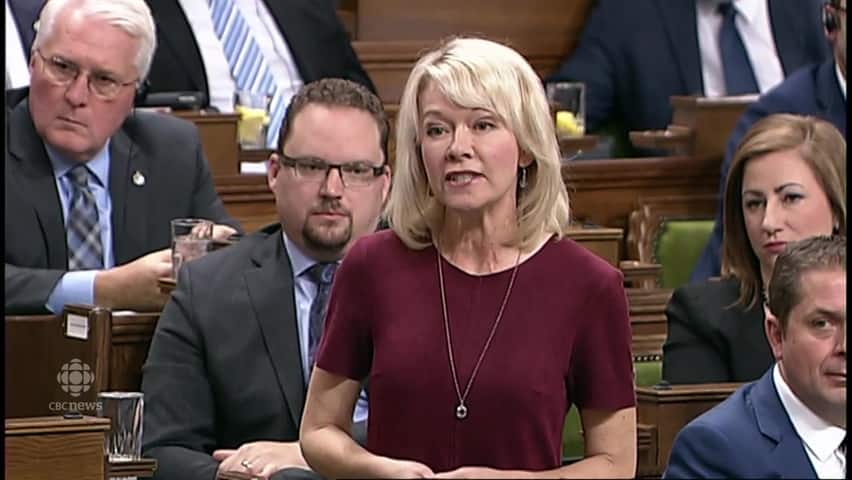 2 years ago
0:53
Conservative MPs question the Liberals over former CBC journalist James Cudmore's employment in Defence Minister Harjit Sajjans' office after the reporter broke a story about a cabinet leak. 0:53

The questions follow a line of inquiry the Conservatives have employed in recent weeks on the ongoing trial of Vice-Admiral Mark Norman.

The political, bureaucratic and corporate tug-of-war over acquiring a leased supply ship for the navy is underpinning the Crown's case against Norman.

He was charged last spring with a single count of breach of trust.

Prosecutors allege Norman, the former vice chief of defence staff, favoured a $668 million proposal for the supply ship from the Quebec-based Davie shipyard. When the newly elected Liberal government wanted to pause the project, the prosecution alleges, Norman leaked word of the secret decision of the cabinet committee.

At the time, he was head of the navy.

Amid the ensuing political uproar over the possible cancellation, the Liberals backed down; the ship was eventually completed and has now entered service.

The leak to CBC News became the basis of an RCMP investigation. Cudmore, the reporter who wrote the story, left journalism shortly afterwards and went to work as a policy adviser in Sajjan's office.

With files from the CBC's Murray Brewster