Jagmeet Singh brings something new to the NDP

Fifty-six years after the NDP was born, the "new" part can seem a bit anachronistic. But, in Jagmeet Singh, the NDP at least has a leader who looks and sounds like something new.

The newest federal leader made it look easy on Sunday, but now it will get harder

As the NDP was coming together between 1958 and 1961, it loosely existed as the New Party. Two candidates ran under the name in a pair of byelections in October 1960. Walter Pitman, victorious in Peterborough, Ont., became Parliament's first and last New Party MP.

The following summer, at the party's founding convention, the word "democratic" was inserted and the NDP was born.

Fifty-six years later, the "new" part can seem a bit anachronistic. But it is easy to imagine why someone might look at the world of politics and wish for something new.

In Jagmeet Singh, the NDP at least now has a leader who looks and sounds like something new.

At 38, he is the youngest leader in the party's history (and 19 years younger than Tom Mulcair was when he became leader in 2012). Though an MPP in Ontario for the last six years, he is a newcomer to Ottawa.

He's comfortable with Snapchat. He is a social democrat who wears nice suits. His leadership raises the possibility of an NDP that can compete in the suburbs around Toronto.

And, as already well-noted, he is the first non-white leader of a major federal party. He wears a turban and a kirpan. That is history, but it also means a leader who will bring new experiences to the job and new stories to the stage.

But, of course, nothing stays new forever. And Singh will now have to be durable.

"This is going to sound interesting to say this," Singh said on Sunday as he came to the turning point in his victory speech.

"As your new leader…"

His supporters chanted his first name.

"You pronounce it right too," he joked. "Thank you for that."

(For the record, it's pronounced Jug-meet.)

A moment later, he did a roll call of the first names who led the NDP before him.

"So from Tommy to David, Ed, Audrey, Alexa, Jack and Tom and today to all of us, we are the party that is building a better Canada," he said. "It is us. And it is in us that you can see the future of our country, how great our country will be with a New Democratic government."

In adding his name to the list, Singh made victory look easy. 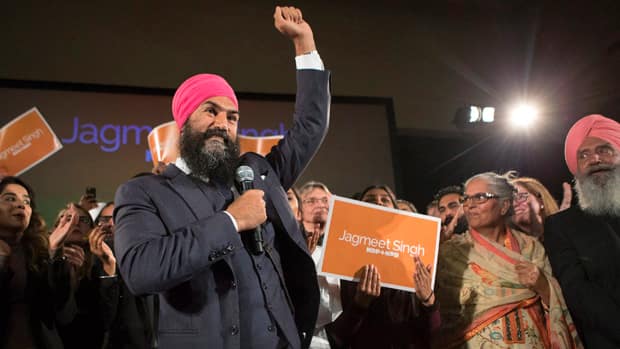 3 years agoVideo
21:02
An emotional Jagmeet Singh promises to fight for Canadians facing unstable work and to oppose the 'politics of division' after winning the federal NDP leadership in Toronto 21:02

Had Nathan Cullen or Megan Leslie — two of the party's most-interesting figures — entered the race, Singh's path to victory might've been narrower. But being ready to run is a significant prerequisite. And Singh's victory is resounding enough that it will defy most quibbles.

Charlie Angus, despite a disappointing result, will presumably remain a valuable voice on Indigenous reconciliation. Niki Ashton at least demonstrated there is a certain audience for the strident leftism she was presenting. Guy Caron likely boosted his own standing as a credible and potentially important voice for the party on economic policy.

A rush of endorsements to Caron in the latter stages of the campaign seemed to underline a concern for the NDP's precarious foothold in Quebec, and that will be the first point of intrigue for Singh. But even if Singh skillfully resolves concerns about how a turbaned Sikh man who opposes Quebec's Bill 62 can navigate the cultural forces in Quebec, the greater task of leading the NDP is unlikely to be easy.

The party has taken two years to move on from its miserable showing in the 2015 election and its fundraising has been anemic. Singh now has less than two years to get ready for 2019.

Eleven NDP MPs endorsed him — more than any other candidate — but Singh now has a 44-member caucus to manage. If Tom Mulcair resigns his seat in the near future, the NDP will have an early, high-profile byelection test.

Without a seat of his own, Singh might spend plenty of time outside Ottawa, introducing himself to Canadians. But at some point not having a seat might look like a weakness.

And whatever Justin Trudeau's missteps or shortcomings, he remains rather popular.

What does the NDP want to focus on?

Cullen, who endorsed Singh two weeks ago, says he sees disappointed progressives who are ready to hear another offer after voting Liberal in 2015. But the next big issue, he thinks, will be addressing the economic and social change that those under the age of 35 are facing.

The party that speaks to that uncertainty could harness a substantial voting bloc.

Singh himself has focused on four issues: inequality, climate change, reconciliation and electoral reform. At least three of those areas (apologies to electoral reform) could prove to be fertile political ground and build an agenda for generational change.

Key to Cullen's decision to endorse was his enthusiasm for the team around Singh: a group he describes as young, energetic, thoughtful and willing to take risks. "I really like him and I like the crew that he's built," Cullen said, "which is a reflection back on him, right?"

Together, they might author a new era for the NDP.

But the shiny new leader will now, inevitably, be roughed up. Mistakes will be made. Gaffes will happen. He might author the first major Snapchat controversy.

All the while, New Democrats might give a thought to patience.

The three most-revered leaders in the history of the party with "new" in its name — Tommy Douglas, Ed Broadbent and Jack Layton — were each given four chances to lead the party into an election. And each had their best result in that fourth try, including 103 seats in 2011 for Layton.

That 2011 result might have reduced the NDP's willingness to accept something less than total victory. But winning government in 2019 would require a wide swing in popularity. Singh's best chance of becoming prime minister might not come until 2023 (or later).

Based on the party's current polling, and depending on how he is received in Quebec, even keeping the NDP at 44 seats might be an initial challenge.

So, in the fall of 2017, Jagmeet Singh seems very much of the moment: new and fresh and interesting. But his ultimate success might depend on his ability to hang around.