If the NDP should be aiming to be interesting again, leadedship contender Jagmeet Singh is at least that.

Speaking to a crowd of 150 or so — a JagMeet and Greet — inside an art gallery in one of Ottawa's trendier neighbourhoods on Tuesday night, Jagmeet Singh suggested unnamed strategists had cautioned him against running for the NDP leadership under the banner of "Love & Courage."

"They said to us, 'You can't talk about love and politics, that doesn't work. It's not going to catch on,'" he said. "I'd like to believe it caught on a bit."

More important, he said, is what the words mean to him.

"And it takes an act of courage to demand better, to dream bigger, so we can fight for a better and more just world."

It's actually hard to imagine anyone familiar with the New Democratic Party turning up their nose at such stuff.

Indeed, If you were writing a hagiographic history of the NDP, you'd probably end up calling it Love & Courage, invoking the most famous words of the party's two most revered saints.

"Love is better than anger," Jack Layton famously wrote in his last letter in 2011.

"Courage, my friend; 'Tis not too late to build a better world," Tommy Douglas is widely remembered as saying.

Perhaps more important, it makes for a decent hashtag: emotional, earnest, evocative and personal. (There is a passing resemblance to the "hope and hard work" that Justin Trudeau wrapped himself in while becoming Liberal leader.)

If anything, it might only seem presumptuous for a 38-year-old, two-term NDP member of the Ontario legislature to be adopting such a slogan.

As Singh spoke on Tuesday night he was the presumptive front-runner to succeed Layton and Douglas and, most recently, Tom Mulcair as leader of the NDP. That presumption was significantly reinforced 12 hours later when Singh accepted the endorsement of Nathan Cullen, the NDP MP who, if he had run, would have been considered the favourite himself.

Now, in less than two weeks, Singh might inherit the aura of Douglas and Layton.

Singh's new chapter could be fascinating. 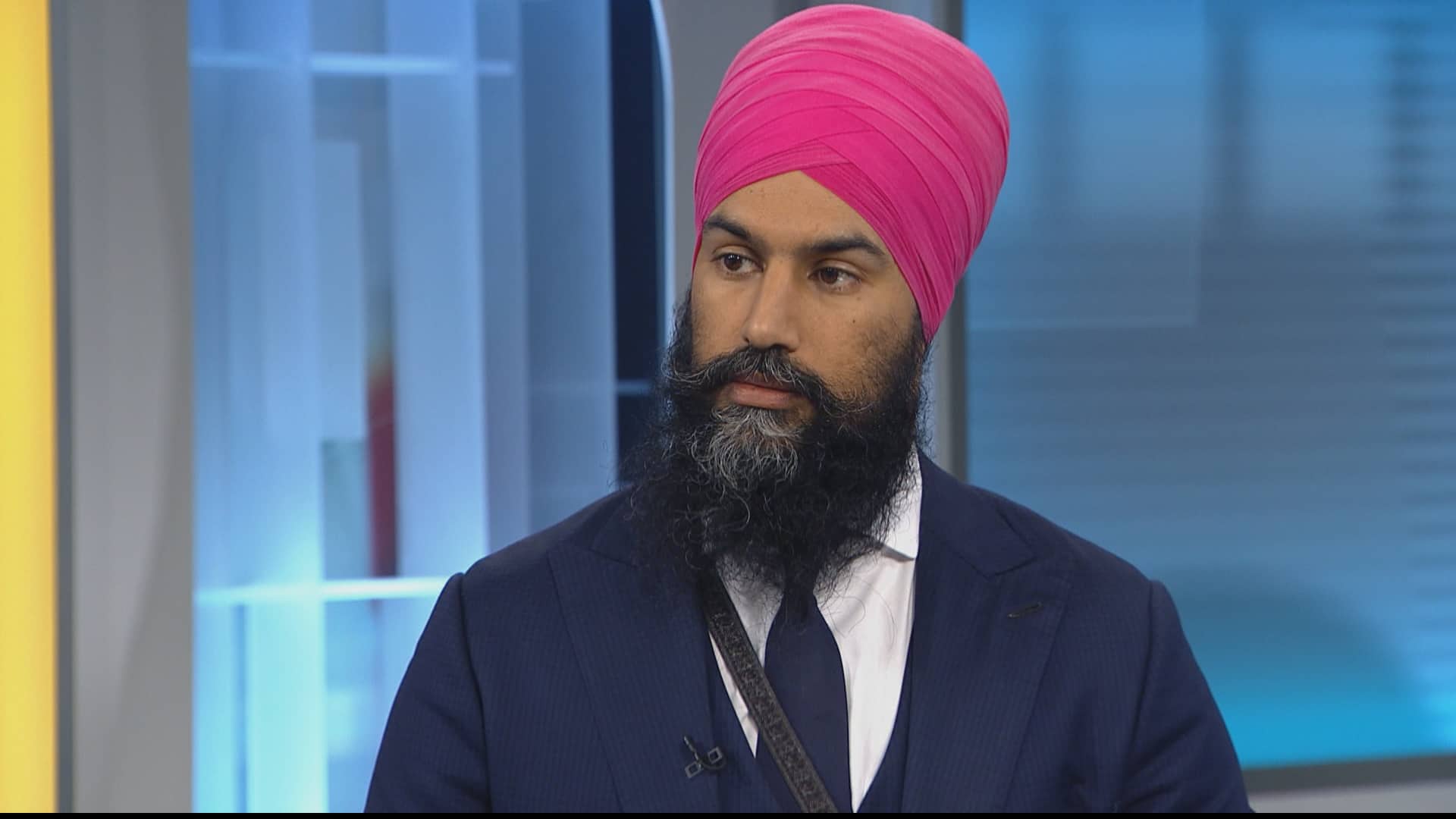 Can Jagmeet Singh take on Trudeau from outside the House?

3 years ago
12:37
The NDP leadership candidate talks to Power & Politics about his next steps if he wins the vote. 12:37

If the NDP should be aiming right now to be interesting again, Singh is at least that. Not least because of his skin colour, but also because of his political abilities, manner and potential.

Befitting the times, he has demonstrated an ability to go viral. And it is easy to imagine how his style might appeal to young voters and how his story might resonate with first- and second-generation Canadians, perhaps significantly eroding Liberal support among such constituencies to the benefit of either the NDP or Conservatives.

Conversely, his turban and his lack of equivocation in opposing the Quebec government's Bill 62 could drive away some of the NDP's supporters in Quebec. And that could cause friction within the NDP caucus.

Even outside Quebec, it's not clear how a Sikh man will be received as a political leader. Just 63 per cent of respondents to an Angus Reid survey earlier this year said they'd vote for a party led by a Sikh.

He would be a newcomer charged with managing a caucus. He could represent a generational change for the NDP, but he has a flagging party to rebuild

Assuming, of course, that he wins. Singh looks good. But it has already been a tough year for well-dressed front-runners. 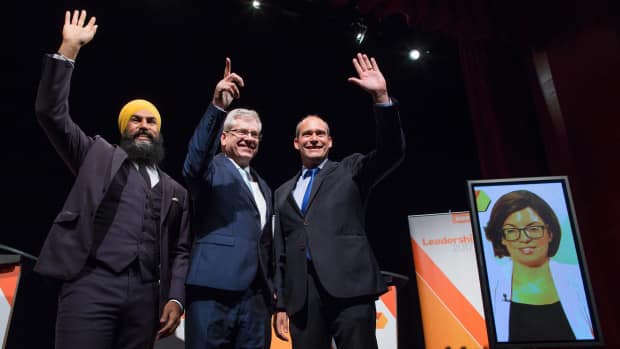 3 years ago
1:59
The four candidates vying for leadership of the NDP made final pitches to a Hamilton audience. Jagmeet Singh, Charlie Angus, Niki Ashton and Guy Caron are the final four in the race. 1:59

Welcome to the Snapchat era

On Tuesday night, he wears a dark three-piece suit, the black strap from his kirpan visible across his chest, and loafers and a pink turban. The crowd is diverse (white, black, brown, a few turbans) and young. He looks relaxed working the room, smiling easily and leaning in for half-hugs.

At one point he asks everyone to cheer while he captures a bit of video on his smartphone for Snapchat.

"That was fire," he says when he's done.

It is unlikely Layton or Douglas were ever heard to use that expression, except perhaps in reference to actual flames.

Singh had uploaded video throughout his day in Ottawa and later, after he leaves the art gallery, he'll post video of his visit to a supervised-consumption site in a different part of the city.

He is casual in his remarks, but perhaps overly so, going on a bit long and rambling in spots.

He weaves in some of his own story, about growing up as a kid who looked different and had a "funny-sounding name" and how he was able to afford to go to law school but worries about other kids who now can't.

He commends leadership competitor Niki Ashton for championing free tuition and he says the federal government should not be charging interest on student debt. 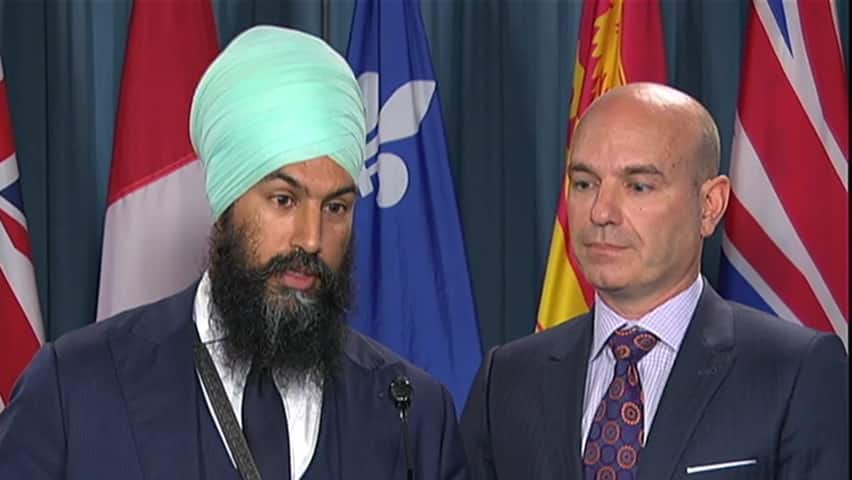 3 years ago
1:51
NDP MP Nathan Cullen endorses leadership candidate Jagmeet Singh and says the fact that Singh doesn't hold a seat in parliament will not hinder his party. 1:51

A story only Singh could tell

He says his policy agenda is based on four pillars, but then provides a lengthier list of priorities: inequality, including pay equity and affordable housing, reconciliation with Indigenous Canadians, climate change, electoral reform and criminal justice reform.

In substance, it is probably all well within the bounds of NDP orthodoxy.

But Singh talks about the practice of carding and then he entertainingly recounts a story of being stopped by police officers when he was a second-year law student in Toronto, a story that recalls neither Layton nor Douglas, but, vaguely, the second verse of Jay-Z's 99 Problems.

He physically acts out the story, chides himself slightly and invites the audience to laugh at certain points, but still hits the feeling of alienation that resulted.

It's a story — with its suggestion that he was being unfairly questioned because of his skin colour — that maybe no major party leader in federal history has ever been able to tell.