'I hope he gets impeached,' NDP leader jokes about Donald Trump

NDP Leader Jagmeet Singh joked that he hopes Donald Trump "gets impeached" when asked Thursday evening what would he first say to the U.S. president if he was prime minister.

NDP Leader Jagmeet Singh joked that he hopes Donald Trump "gets impeached" when asked Thursday evening what would he first say to the U.S. president if he was prime minister.

"I hope he gets impeached before I get to speak to him," said Singh as the crowd cheered. "I say that a little tongue-in-cheek."

CBC News asked Singh the question during a campaign event in Nanaimo, B.C. ,where Singh was speaking at a town hall.

Singh said it is "disgusting that the president could inflame hatred against people and be so divisive."

"It's horrible that someone in a position of power like him would allow for kids to be stripped from the arms of their parents, from their moms," he said. "That needs to be denounced."

Singh has already heavily criticized Trump for the U.S. government's separation of migrant children from their parents in immigration detention centres at the U.S. Mexico border.

"You can't allow someone like that to do that without any sort of repercussion, without anyone else condemning that," Singh said last night. "And I condemn it."

Singh is the first of the Canadian party leaders to comment directly on the possible impeachment of Trump.

"Congress members will make the decision," Singh said in French on Wednesday outside Vancouver's city hall during a media conference. "I think there's a lot of proof to move forward with these proceedings." 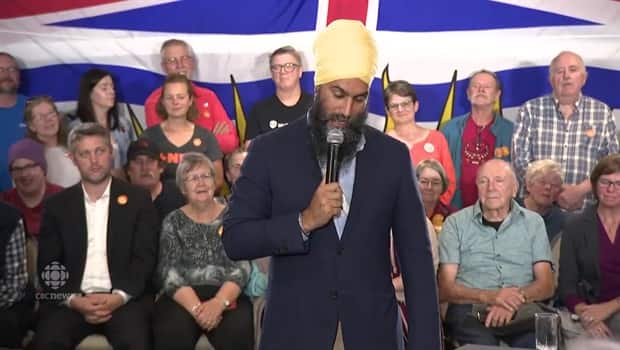 Questioned about the impact of the proceedings on the ratification of the new Canada-U.S.-Mexico Trade Agreement, Liberal Leader Justin Trudeau and Conservative Leader Andrew Scheer this week simply declared they would keep an eye on how things evolved.

Relations with Canada's strongest ally and biggest trade partner, the United States, have been filled with ups and downs since Donald Trump took office in 2016.

It's been a difficult file for Canada to manage, including weathering a long, rocky renegotiation of the North American trade pact formerly known as NAFTA.

In June 2018, the United States slapped new tariffs on Canada: 25 per cent on imports of steel and 10 per cent on aluminum, citing national security. Canada retaliated with tariffs on U.S. steel, aluminum and other consumer products.

After months of tense talks and refusal by Canada to ratify the new trade deal unless the tariffs were dropped, the U.S. agreed to lift them nearly a year later.