Expelled Conservative candidate Jagdish Grewal, dumped by the party Tuesday after questions were raised about an editorial he wrote in a Punjabi-language publication, insists he is not homophobic and wants the party to let him back in. 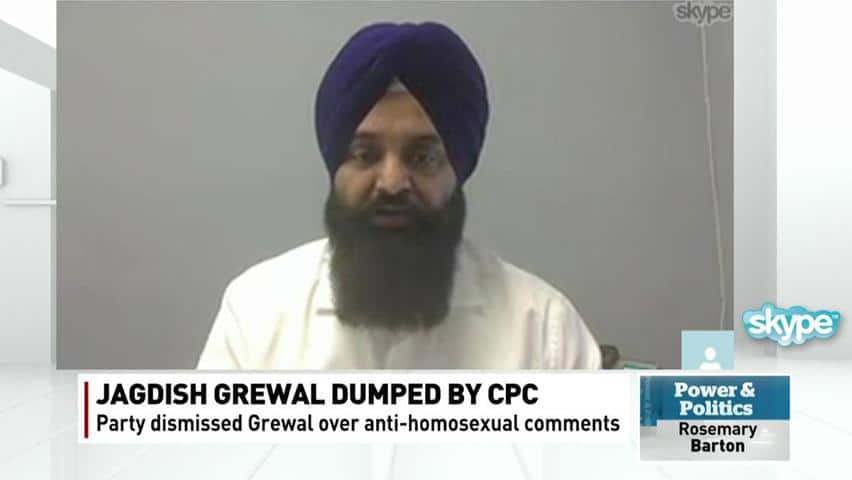 Expelled Conservative candidate Jagdish Grewal insists he is not homophobic and wants the party to let him back in.

Late Tuesday, Grewal was dumped as the Conservative candidate for the Ontario riding of Mississauga-Malton, just hours after media reports surfaced about a controversial editorial he wrote in March. In that article, he wrote about therapies to turn gay youth straight.

But Grewal says key parts were misquoted because of poor translation from Punjabi to English.

"If I win, I will appeal to the Conservative Party, to the national caucus, to clear this misunderstanding. And I hope they will take me back. But it's up to them," Grewal told CBC News.

One passage in the editorial published in the Punjabi Post was translated as: "Is it wrong for a homosexual to become a normal person?"

But Grewal says the more accurate translation is: "Is it wrong for a homosexual to become a straight person?"

He said he was presenting opinions of psychologists and the Alliance for Therapeutic Choice and Scientific Integrity, an American group that offers therapies to people who have "unwanted homosexual attractions."

Grewal also wrote in the piece that some psychologists blame a "shock" during childhood for causing a person to become gay, but that the change "can be corrected." While he did not explain why his article did not present criticisms of so-called "reparative" therapy, he insisted he is not anti-gay.

"I respect them. I have equal respect for all children of God," Grewal said.

Grewal also told CBC News Network's Power & Politics he is considering legal action against anyone who, he says, mistranslated the headline, including media outlets.

Late Tuesday, the Conservative Party issued a statement that Grewal's comments do not reflect the views of the party, and that he was no longer an official candidate.

The decision comes too late for Elections Canada to change ballots, however, so Grewal will appear on the ballot for Mississauga-Malton as a Conservative candidate. Grewal said he would continue to campaign under the party banner and use his Conservative campaign signs.

The party did not immediately respond to a question from CBC about whether it would reconsider his candidacy or take any action to prevent him from using the Conservative Party name.