A divided House of Commons voted Tuesday in favour of sending Canadian aircraft and personnel to join coalition airstrikes in Iraq against Islamic State of Iraq and Syria (ISIS) targets.

157 vote in favour of motion in House of Commons, 134 against 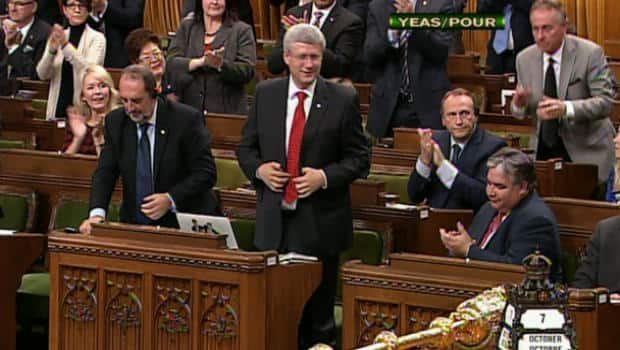 6 years ago
8:49
House of Commons vote on the government's motion to join an air combat mission against ISIS militants 8:49

A divided House of Commons voted Tuesday in favour of sending Canadian aircraft and personnel to join coalition airstrikes in Iraq against Islamic State of Iraq and Syria (ISIS) targets.

"We do not take this step lightly. The threat posed by [ISIS] is real," said Prime Minister Stephen Harper in a statement released shortly after the motion passed 157-134.

"If left unchecked, this terrorist organization will grow and grow quickly. They have already voiced their local and international terrorist intentions and identified Canada as a potential target."

Six CF-18 fighter-bombers, two CP-140 surveillance planes, one aerial tanker aircraft and 600 personnel have been tapped to join coalition airstrikes in Iraq for up to six months, pursuant to the motion before the Commons.

Harper stressed Canadian troops would not be involved in ground combat against ISIS, also known as ISIL.

"I think this is absolutely the right thing to do, and the right time to do it," Justice Minister Peter MacKay told reporters on his way out of the vote in Ottawa, saying the government has "great confidence" in the ability of men and women in uniform.

In a written statement released after the vote, Opposition Leader Tom Mulcair accused the government of "plunging Canada into a prolonged war without a credible plan to help victims of ISIL terror," and "opening the door" to getting Canada involved in the "bloody" Syrian civil war.

Employment Minister Jason Kenney said the Opposition had departed from the international "consensus" on the need to stop ISIS.

"Every social democratic party in the developed world, certainly in Northern Europe, has supported military action," he said, citing examples from Denmark, Belgium, the Netherlands and the United Kingdom. "Parties of the mainstream left across the democratic world understand that you have to use hard power occasionally to defend innocents.

"I think there's been some tortured reasoning going on here," he said. "I think regrettably it has a lot more to do with politics than with principle."

Mulcair's New Democrats had proposed an amendment to overhaul the motion entirely and switch the focus to supplying arms to local fighters battling ISIS and increasing humanitarian support.

That motion was defeated by a vote of 157 to 134, with all but two opposition MPs voting in favour, and the Conservatives voting against.

Green Party MP Bruce Hyer and Brent Rathgeber, an Independent who used to sit with the Conservatives, voted with the government on both the NDP amendment and the main motion.

"In response to the Conservatives' ill-defined combat mission, New Democrats laid out a strong alternative action plan that would significantly increase Canada's humanitarian response to this crisis," Mulcair said.

"The Conservatives voted against smart and responsible measures that would save lives in Iraq right now."

Moments after the vote, Liberal Leader Justin Trudeau took to Twitter to reaffirm that his party "disagrees with [the government] on how Canada can best help confront threat of ISIL."

"Tonight we voted against motion to send our Forces to war," he noted.

"The members of the Canadian Armed Forces who will now go into harm’s way have our full and unwavering support."

The longtime MP released a statement explaining that he feels the government motion is unclear on Canada's involvement and did not share enough information for MPs to make an informed choice.

"In particular — and this is reason enough for me not to support the motion — I am deeply disturbed by the prime minister’s statement that Canada would require the approval of the criminal Assad regime to carry out operations in Syria," he wrote.

"To allow the perpetrator of war crimes, crimes against humanity, ethnic cleansing and genocide to green-light Canadian intervention is to turn R2P on its head," he said, referring to the doctrine of responsibility to protect, a principle in international law that a country can take action against another to safeguard civilians against mass atrocities.

Assad, Cotler said, "should be a criminal defendant, not a coalition partner."

He added that the government "has neither briefed nor consulted with the leaders of the opposition, nor has it shared more fulsome information about the mission that would have helped parliamentarians to make an informed choice."

"The Liberal Party should hang its head in shame," Kenney said, calling it a "radical departure" from Liberal tradition.

"This is an ignoble day for the proud Liberal Party of Canada, underscored by Irwin Cotler's absence tonight," he said.

"Tonight we're talking about sending six fighter [jets] to defend innocent civilians from a maniacal, genocidal death cult," he said. "As far as I'm concerned, this was the easiest call that a government or Parliament has faced in the deployment of force in decades."

Kenney noted that former prime minister Jean Chrétien had sent Canadian troops to Kosovo and Afghanistan without consulting Parliament. He said a "more obvious" Liberal position would have been to demand a more robust deployment, not oppose the current one.

There is no requirement for the House of Commons to approve combat missions, but Harper promised this mission would be put up for debate when he first floated the idea of a new military role in Iraq.