Public Safety Minister Ralph Goodale has refused to provide details on the status of a Canadian former ISIS fighter who made an apparent confession to an execution-style killing in Syria — and then later retracted it — saying police and security officials are taking all necessary steps to "keep Canadians safe."

Public Safety Minister Ralph Goodale has refused to provide details on the status of a Canadian former ISIS fighter who made an apparent confession to an execution-style killing in Syria, saying police and security officials are taking all necessary steps to "keep Canadians safe."

Goodale fielded questions from the Conservatives in the House of Commons Friday about the former ISIS member, who goes by the jihadi nom de guerre Abu Huzaifa al-Kanadi (Abu Huzaifa the Canadian), after he gave a detailed account in a New York Times podcast of firing a bullet into the back of a man's head — a story he now says he made up.

Speaking with CBC on Friday afternoon at the suburban Toronto-area business where he works, the 23-year-old denied killing anyone when asked about his statements in the podcast.

"I did not," he said. "You can put me through a polygraph and it will prove that I didn't kill anyone."

When asked why he told Times reporter Rukmini Callimachi that he participated in an execution, Huzaifa said, "I was being childish. I was describing what I saw and basically, I was close enough to think it was me."

CBC News reached out to Callimachi for comment. A newspaper spokesperson responded via email, saying the Times had "confirmed with multiple intelligence agencies" that Huzaifa had been a member of ISIS and had travelled to Syria.

"Forthcoming episodes in our series detail the fact-checking process at length and show what we know to be true about his story, and how we came to know it," wrote spokesperson Danielle Rhoades Ha.

CBC News has reported that Abu Huzaifa had been questioned extensively in the past by RCMP and CSIS, but was not charged.

Abu Huzaifa said Friday he hasn't been contacted by the RCMP for "months" but added that, earlier Friday, a CSIS official contacted him and said, "You're famous again." Abu Huzaifa said the official told him CSIS wants to meet with him next week to discuss the allegations.

Those allegations emerged in a New York Times audio series called "Caliphate." In the podcast, Abu Huzaifa makes an apparent confession to taking part in the communal, execution-style killing of Sunni Muslim men. The middle-aged men — blindfolded and with their arms tied — were killed, he said, because they had offered resistance to ISIS. 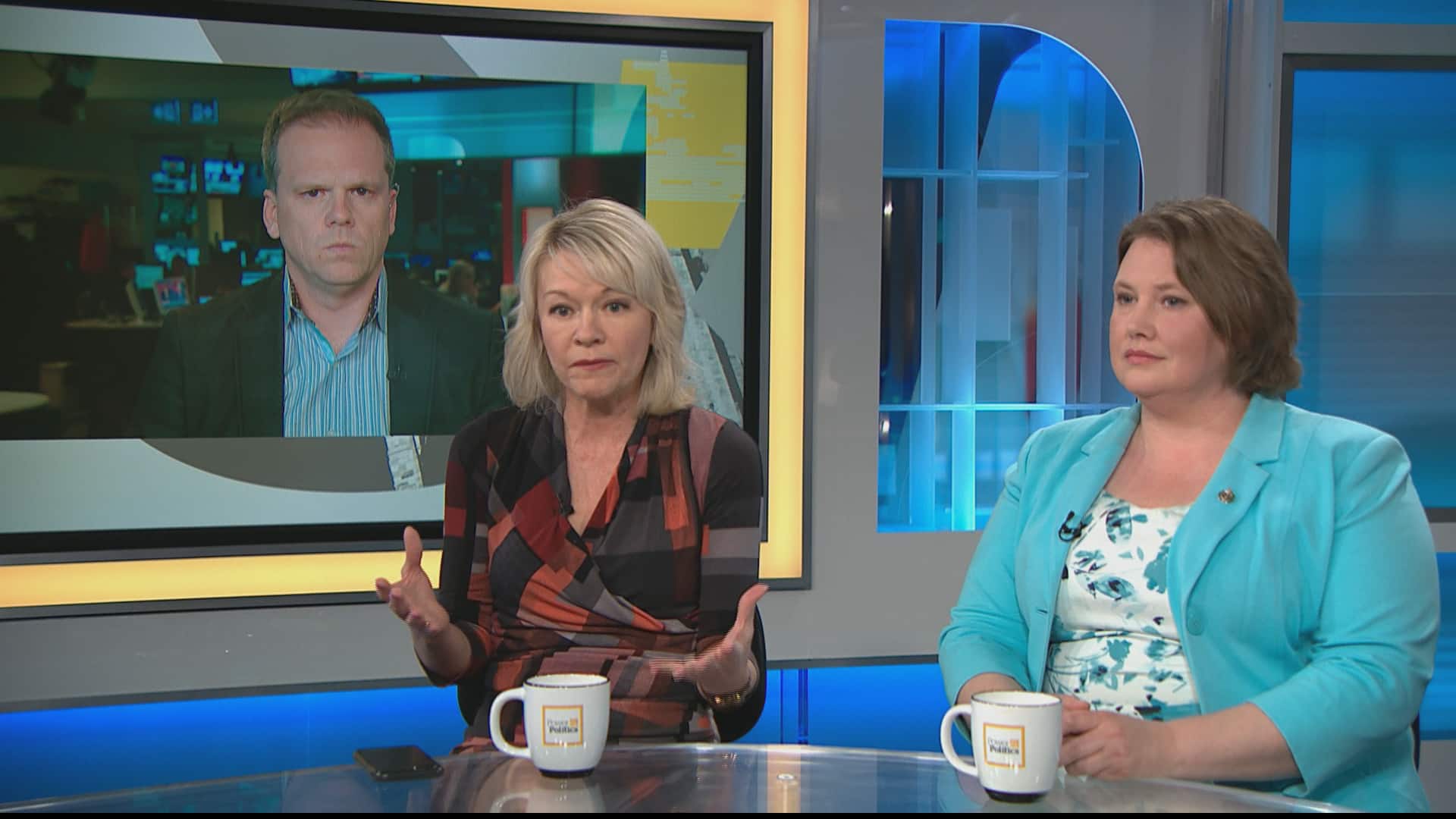 Before firing the fatal shot into the back of the man's head, Abu Huzaifa said he told himself it was justified — that "you can do it and you won't be held accountable.

"You kind of have to close your eyes and do it. You just shoot."

Since the podcast was published, Abu Huzaifa said he's been told a Hollywood movie producer wants to buy the rights to it. He told CBC News that he wouldn't participate. "They can't buy my rights," he said.

At one point during the discussion with CBC News on Friday, Abu Huzaifa began to cry.

He also said his interview with Callimachi took place in Oct. 2016, three weeks after he returned to Canada.

Abu Huzaifa told CBC that he's been taking medication to dull the emotional trauma of his experiences in Syria.

Earlier on Friday, Conservative House leader Candice Bergen demanded to know what the Liberal government and the authorities are doing about Abu Huzaifa and other ISIS fighters who have returned to Canada.

"This guy is apparently in Toronto. Canadians deserve more answers from this government. Why aren't they doing something about this despicable animal that's walking around the country?" she said.

CSIS has estimated about 60 Canadians have returned home after fighting with foreign terror groups.

Goodale said Canadians can be "very assured" that CSIS, the RCMP and other security and police agencies are doing their job.

"The security agencies and police agencies of the government of Canada are making sure that they know all of the facts that they need to know. And that they are taking all of the measures that are necessary to keep Canadians safe," he said.

"The last thing that would ensure the safety of Canadians is to have a play-by-play commentary on security operations on the floor of the House of Commons."

In the New York Times podcast, Abu Huzaifa said in his apparent confession that after the mass execution he tried to look only at the man's feet — but "peeked." The executioners then piled up the row of dead bodies.

He said he couldn't get the smell of blood off his hands and felt sick for the rest of the day.

He also described how ISIS conducts training — using mannequins to teach recruits to stab and shoot — and the tactics used to desensitize them to violence.

Abu Huzaifa describes in the podcast growing up in a normal family of Pakistani immigrants — Muslims who were not "particularly religious." He details how he was drawn in through online chat groups and recruited because he "always wanted something bigger, not something simple or boring."

Asked when he decided to leave, he said: "The second time I killed someone." 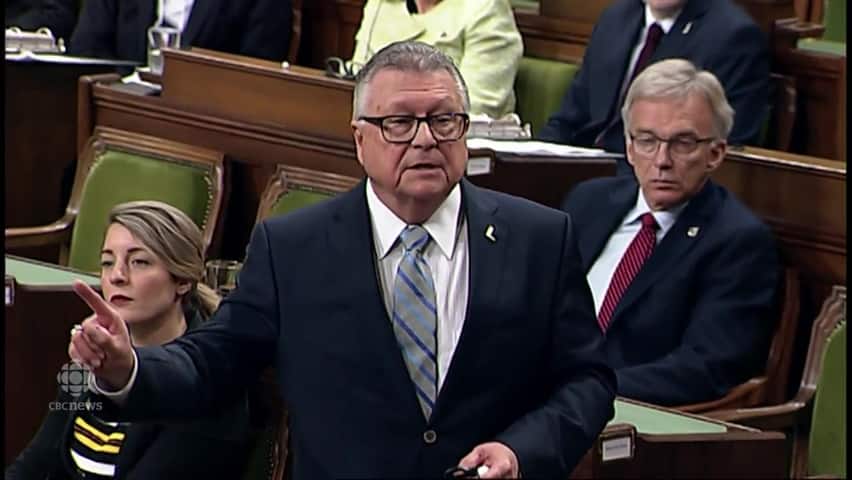 In early September of last year, Abu Huzaifa told CBC News he left Toronto in 2014 to join the extremist group when he was 17 going on 18.

Five months after serving as an ISIS enforcer in the Syrian city of Manbij, Abu Huzaifa said, he realized it wasn't what he had signed up for and decided to flee for home.

He told CBC he had witnessed violence on a scale he never could have imagined — including public lashings, beheadings and crucifixions — but said at the time he had never harmed anyone.

He would only agree to speak to the CBC on the condition that his real name and identity not be revealed. Afraid for his life, he said he suffered from nightmares and was waking up in a cold sweat at least three times a week. 3 years ago
2:31
The story of a young Canadian who escaped back to Canada after serving for months as an ISIS enforcer in Syria 2:31

Speaking after the daily question period Friday, Bergen said the government must send a strong message that it will hold ISIS fighters to account instead of welcoming them home to Canada without consequences.

She said Abu Huzaifa should be in jail rather than walking free, noting that it is a crime to leave Canada for the purpose of engaging in terrorist activity.

"He should be arrested today. He should not be in the streets of Toronto. If he can be speaking to the media, he can then be identified by the government, by the police, and he can be arrested," she said.

Before learning that Abu Huzaifa had retracted his story, former CSIS director Ward Elcock said a confession on a podcast is not enough for police to lay a charge; they still have to conduct a thorough investigation to establish that a crime was actually committed, and to gather evidence to prove the person who confessed actually did it.

And when the crime in question is a homicide alleged to have taken place years ago in Syria, he said, it can be "enormously difficult" to build a case.

"It's not impossible, but it's not easy," he said.

Elcock said it's possible police already have an investigation open on Abu Huzaifa, and he may be under surveillance if authorities believe he is a security risk.

"At the end of the day, the question is, is he a threat or not? The service will be trying to identify that," he said.

"If there's a law enforcement investigation, at some point they might announce he's being charged. If they don't have enough evidence, they won't."

Elcock said he can't explain Abu Huzaifa's motivation for speaking out, adding some people confess to crimes they didn't commit — and even come to believe they did commit them.

For its part, the RCMP won't say if they're investigating Abu Huzaifa.

"Generally, only in the event that an investigation results in the laying of criminal charges would the RCMP confirm its investigation, the nature of any charges laid and the identity of the individual(s) involved," said spokeswoman Sgt. Tania Vaughan.

With files from the CBC's Nazim Baksh and Brennan MacDonald