The admission by Iran Saturday that "human error" had led to the "unintentional" shooting down of Ukraine International Airlines Flight PS752 effectively took the steam out of a rare moment of good PR that boosted the regime in the aftermath of the U.S. assassination of Gen. Qassem Soleimani.

It was a short-lived honeymoon for the Islamic Republic regime — a rare wave of popular support, drowned out by a bigger tide of government neglect and recklessness.

Just hours after angrily calling the allegation that an Iranian surface-to-air missile took down Ukraine International Airlines Flight PS752 a "big lie" and "psychological warfare," Iran's regime has had to confess that the Revolutionary Guard Corps it has lately been lionizing in mass rallies itself fired the fatal missiles.

Much as Iran's authorities may hate admitting that fact to other governments, they are almost certainly more concerned about the reaction from their own people.

The regime's hopes of turning the assassination of Gen. Qassem Soleimani into a moment of renewal for its flagging fortunes were destroyed along with Flight PS752.

From the point of view of the Ayatollah's regime, this situation is a nightmare scenario of incompetence, hypocrisy and lost opportunity.

More than almost any other event, the shooting down of Iran Air Flight 655 by the USS Vincennes in 1988 underpins the regime's narrative of American malignancy.

Iran's foreign minister, Javad Zarif, makes a point of referencing the crash on every anniversary.

And when U.S. President Donald Trump threatened Iran with strikes over the weekend, Iran's President Hassan Rouhani immediately responded with a tweet about the 290 people killed on that flight.

Those who refer to the number 52 should also remember the number 290. <a href="https://twitter.com/hashtag/IR655?src=hash&amp;ref_src=twsrc%5Etfw">#IR655</a><br>Never threaten the Iranian nation.

But within 48 hours his own side would also shoot down a jetliner full of innocent civilians, 147 of whom were citizens of Iran, according to the country's head of emergency operations.

Just weeks ago, the Iranian government faced yet another popular revolt on its streets.

The slogans of the protesters (such as "No to Gaza, no to Lebanon. We sacrifice our lives for Iran," or "We have no money or fuel, to hell with Palestine") linked their economic hardship directly to the costly military adventurism of the regime and the crippling sanctions it's brought.

The Islamic Revolutionary Guards Corps (IRGC), which was the vanguard of that foreign military mission, also played a leading role at home in suppressing those protests, which saw hundreds of protesters shot in one of the most violent crackdowns since the early years of the Islamic Revolution.

The assassination of Gen. Soleimani gave the regime a golden opportunity to rehabilitate the IRGC in Iranian public opinion by focusing on its role in defeating Sunni jihadist organizations outside of Iran, such as ISIS and al-Nusra/al-Qaeda in Iraq and Syria.

Those brutally sectarian organizations, which murder Shia and destroy their shrines, are even more unpopular in Iran than the IRGC. Suddenly, the crowds on the street were celebrating an IRGC commander, in scenes reminiscent of the 1980s when the revolution was new.

But the honeymoon proved extremely short-lived. The Ayatollah's regime began to blow their golden opportunity before Gen. Soleimani's body was in the ground.

One of the hallmarks of the Islamic Republic regime is its tragic indifference to life. This is the same regime that, during the Iran-Iraq War, sent human waves of school-age boys to clear landmines with their own bodies in advance of regular Iranian troops.

The youngsters were given metal keys to hang around their necks and told they would open the doors to paradise. Sometimes they were roped together to prevent them escaping. Their lives were wasted by the tens of thousands in futile offensives like the 1982 Operation Ramadan.

The regime's incompetence and indifference was evident on Tuesday morning as massive crowds gathered in Soleimani's hometown of Kerman. The government wanted the crowds to be as large and as emotional as possible. It appears that more thought was given to the design of the giant posters that overhung the event than to managing the crowds or keeping people safe.

The result was a deadly crush. About 60 people died in the stampede and more than 200 were injured.

The same reckless neglect was on display again 24 hours later, as Flight 752 fell from the sky.

It is a pattern in a country that has a record of preventable deaths on its roads, rails and in the sky.

The crash of Flight 752 is the fourteenth Iranian air crash since 2000 to have caused more than 25 fatalities.

The one shoe yet to drop was the confirmation that the plane was brought down by the Iranian Revolutionary Guard Corps itself, brutally reminding the Iranian people that the organization is more about killing Iranians than it is about killing Americans, Israelis or Sunni jihadists — although Iran's Mehr News quoted an IRGC official as claiming to have killed at least 80 US soldiers in the ballistic missile strikes on U.S. bases early Wednesday.

In its admission of responsibility, Iran stated that the plane was "in close proximity to a sensitive military centre of the IRGC and with the altitude and posture of a hostile aircraft. In these circumstances, the plane was accidentally hit by a human error, which unfortunately results in the martyrdom of dear compatriots and the death of a number of foreign nationals."

Iran's ballistic missile program is under IRGC control, and its "Shahid Tehrani-Moqaddam" Ballistic Missile Research Centre is near to the spot where Flight 752 fell, says Babak Taghvaee, an aviation expert who worked in Iran's military aerospace industry and is author of two books on Iranian military aviation.

"Only the IRGC has the Tor M1 missile system. They received them new from Russia almost 15 years ago to protect their ballistic missile bases," he told CBC News when reached by phone in Malta a few hours before the IRGC confessed to its role.

Dominic Raab, the U.K.'s Foreign Minister, was asked during his Montreal news conference with his Canadian counterpart Francois-Philippe Champagne on Thursday what he hoped to learn from the investigation into the crash. He said he wanted to know what happened, why it happened and who was responsible. 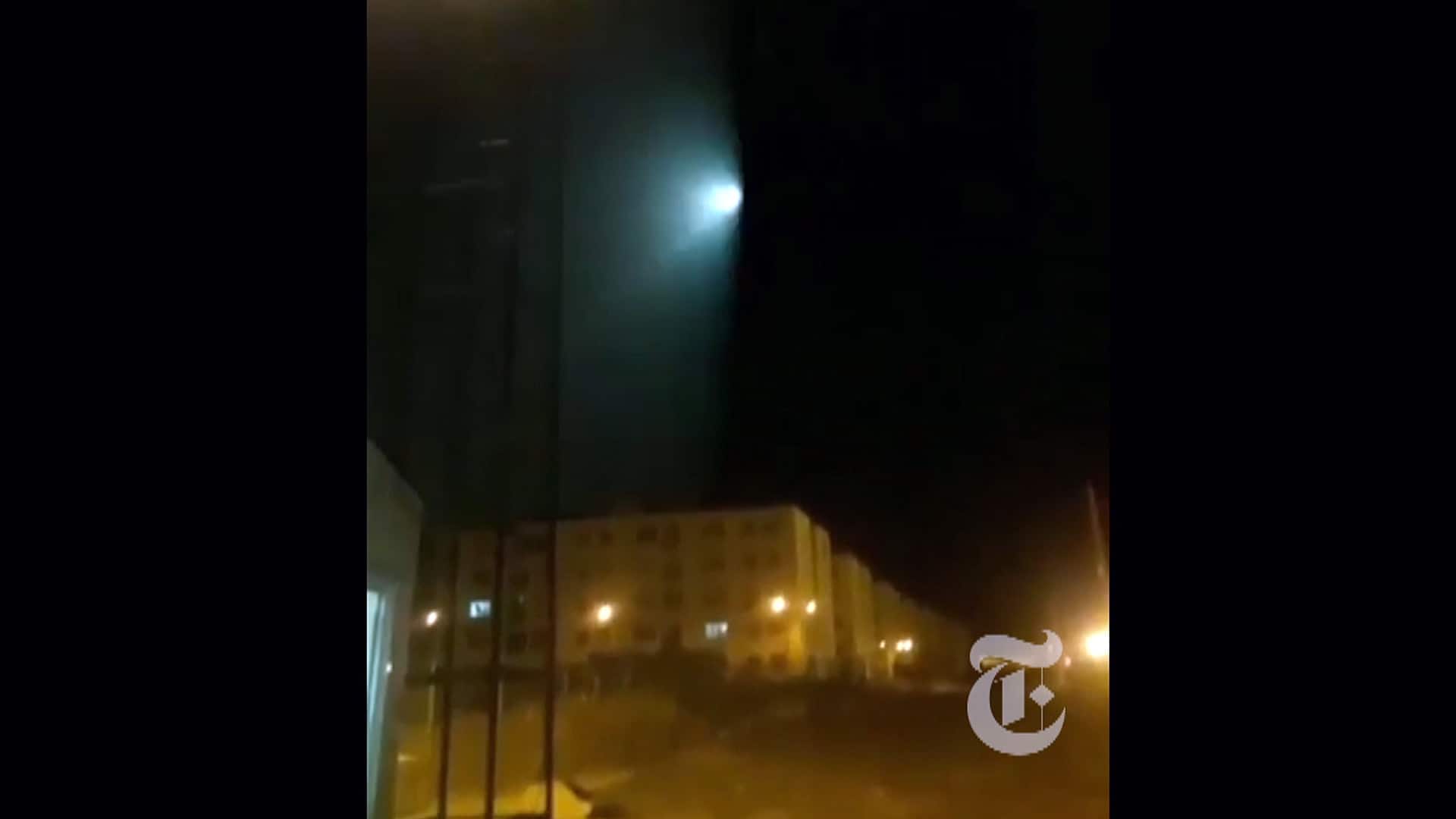 1 year agoVideo
0:20
Video recording appears to show a missile making impact on an aircraft over Tehran. The New York Times says visual and sonic clues in the footage match flight path information and satellite imagery of the area near where Flight PS752 crashed. (Video courtesy of the New York Times) 0:20

A crash investigation, even one not hampered by an unco-operative Iranian regime, would only have been able to answer the first question.

With this confession, Iran answers all three. The Iranian Revolutionary Guards Corps shot down the aircraft. They did it because it flew close to a sensitive base, almost certainly the Shahid Tehrani-Moqaddam Ballistic Missile Research Centre.

"Ali Abedzadeh, the head of the Iranian Civil Aviation Organization, should have grounded all flights, knowing that the air defences were all active. And Brig.-Gen. Amir Ali Hajizadeh, the IRGC air defence commander, should have co-ordinated with them to make sure that happened."