The head of Canada's national Indigenous veterans organization hopes the Canadian Armed Forces members who confronted Indigenous activists at a ceremony in Halifax can stay in the military.

'They just showed up there with a flag. They didn't beat up on anybody,' Richard Blackwolf says

The head of Canada's national Indigenous veterans organization hopes the Canadian Armed Forces members who confronted activists at an Indigenous ceremony in Halifax can stay in the military even if they were "silly" to engage in such a confrontation.

"The whole military has become politicized, we're living in a politically correct era and they [the CAF members] should have realized that this thing would be a media event," Richard Blackwolf, the national president of the Canadian Aboriginal Veterans and Serving Members Association (CAV), said in an interview with CBC News.

"But, hopefully, it won't affect their overall careers. I mean they just showed up there with a flag. They didn't beat up on anybody, it's not like that."

Blackwolf, a 77-year old Métis who served in the navy for 13 years, said the activists assembled at the statue of Edward Cornwallis in Halifax are "point one percenters" who do not adequately represent the country's Indigenous Peoples.

"I saw several races down there [at the statue], it's just a hodgepodge of activists, they're not productive people at all," Blackwolf said.

Chief Grizzly Mamma, an Indigenous woman originally from B.C., shaved her head on the steps of the statue of the controversial British military officer on Canada Day to symbolize the violence First Nations people faced under colonial rule.

"These point one percenters, they did some silly stuff, because they know what the hot-button issues for the media are. They're the bottom feeders," Blackwolf said.

Gen. Jonathan Vance, Canada's top general, has taken a different tack and said in a statement to CBC News Tuesday night that "their future in the military is certainly in doubt."

"What happened in Halifax over the weekend is deplorable, and Canadians should rest assured my senior leadership is seized of the matter," Vance said. "The members involved will be removed from training and duties while we conduct an investigation and review the circumstances."

'This is just gobbledygook'

Chief Grizzly Mamma, and a group of some 50 others, were confronted by five men who said the whole affair was "disrespectful" to Cornwallis, the city's founder. These men, who are members of the Proud Boys, a so-called "Western chauvinist" organization that is associated with the far right, were later revealed to be part of the Armed Forces.

The tense but nonviolent confrontation lasted for about 10 minutes, as the men took issue with assertions from organizers that they were interrupting a sacred rite on Mi'kmaq territory.

"This is Canada," one of the men said, his comments captured on a cellphone video posted on social media. "It might have been Mi'kmaq territory." 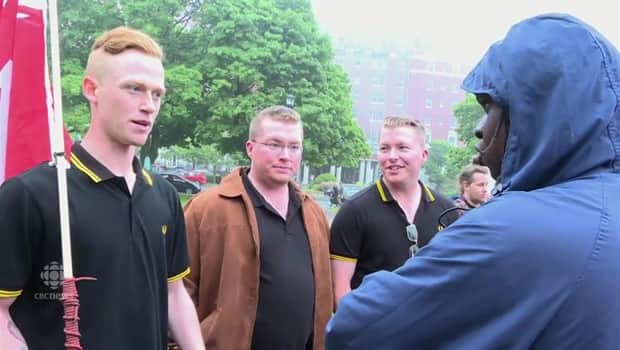 4 years agoVideo
2:10
The Canadian navy has confirmed all 5 men involved in the "Proud Boys" incident at an Indigenous ceremony in Halifax's Cornwallis Park are servicemen. 2:10

Rebecca Moore, the woman who organized the Canada Day event, and a member of Pictou Landing First Nation in Nova Scotia, said people were praying to their ancestors for lives lost since the beginning of colonization.

After the confrontation, Moore told CBC Nova Scotia she wants the Canadian Armed Forces to acknowledge their operations are on unceded Mi'kmaq lands, urging them to improve education among its members on First Nations issues.

Blackwolf said demonstrations like this one simply give Indigenous people a bad name.

"This Chief Grizzly Mamma ... I mean real Native people don't have names like that," Blackwolf said. "This is just gobbledygook. The [servicemen] were silly enough to go there under those circumstances, they should have known better."

'We have stabbed our servicemen in the back'

Gavin McInnes, a co-founder of Proud Boys, who has been the source of controversy for inflammatory — and anti-Semitic — remarks, defended the members of his men's club.

"I think we have stabbed our servicemen in the back, we should be ashamed of ourselves," he said in an interview with CBC's Power & Politics. "They didn't do anything ... they tried to have a civil discussion."

He said his group is not restricted to whites, adding two of the CAF members in question actually have Indigenous ancestry, and one of them is gay.

He said a career in the military is very rewarding, and there is a proud history of First Nations, Métis, and Inuit people serving the Armed Forces.

People who identify as Indigenous make up 2.5 per cent of the regular force and primary reserve force.

Daniel Le Bouthillier, a spokesperson for the Canadian Forces, said Indigenous Peoples are "core members of the defence team and deserve to be celebrated as such."

"The defence team works hard to foster a diverse, inclusive organization and will continue these efforts to ensure a respectful, dignified environment for all Canadians," he said in a statement.

With files from the CBC's Elizabeth McMillan and Anjuli Patil, and The Canadian Press