Hours before introducing a bill to spend up to $82 billion and increase federal powers to fight the COVID-19 pandemic, the Liberals backed off a measure that the Opposition decried as an attempt to get Parliament to sign them a blank cheque.

Government had proposed new powers for up to 21 months to unilaterally spend, borrow and tax Canadians

Hours before introducing a bill to spend up to $82 billion and increase federal powers to fight the COVID-19 pandemic, the Liberals backed off a measure that the Opposition decried as an attempt to get Parliament to sign them a blank cheque.

While Conservatives said they were prepared to quickly approve the billions in emergency financial aid and economic stimulus as promised by Prime Minister Justin Trudeau last week, they balked at a proposal to give the government sweeping new powers for up to 21 months to unilaterally spend, borrow and tax Canadians without seeking Parliament's approval.

The unprecedented proposal was in a draft of the emergency legislation to be tabled in a scaled-down Parliament on Tuesday.

Conservative Leader Andrew Scheer said the Opposition has acted in good faith, but is not prepared to grant unfettered spending powers to the government.

"Our hope is that they will stay focused on providing assistance to Canadians, not focused on a power grab, not focused on giving themselves unprecedented new powers," he said during a news conference in Ottawa Tuesday.

Scheer said MPs can be recalled any time with 48 hours' notice to pass new measures if needed, while still addressing public health concerns. 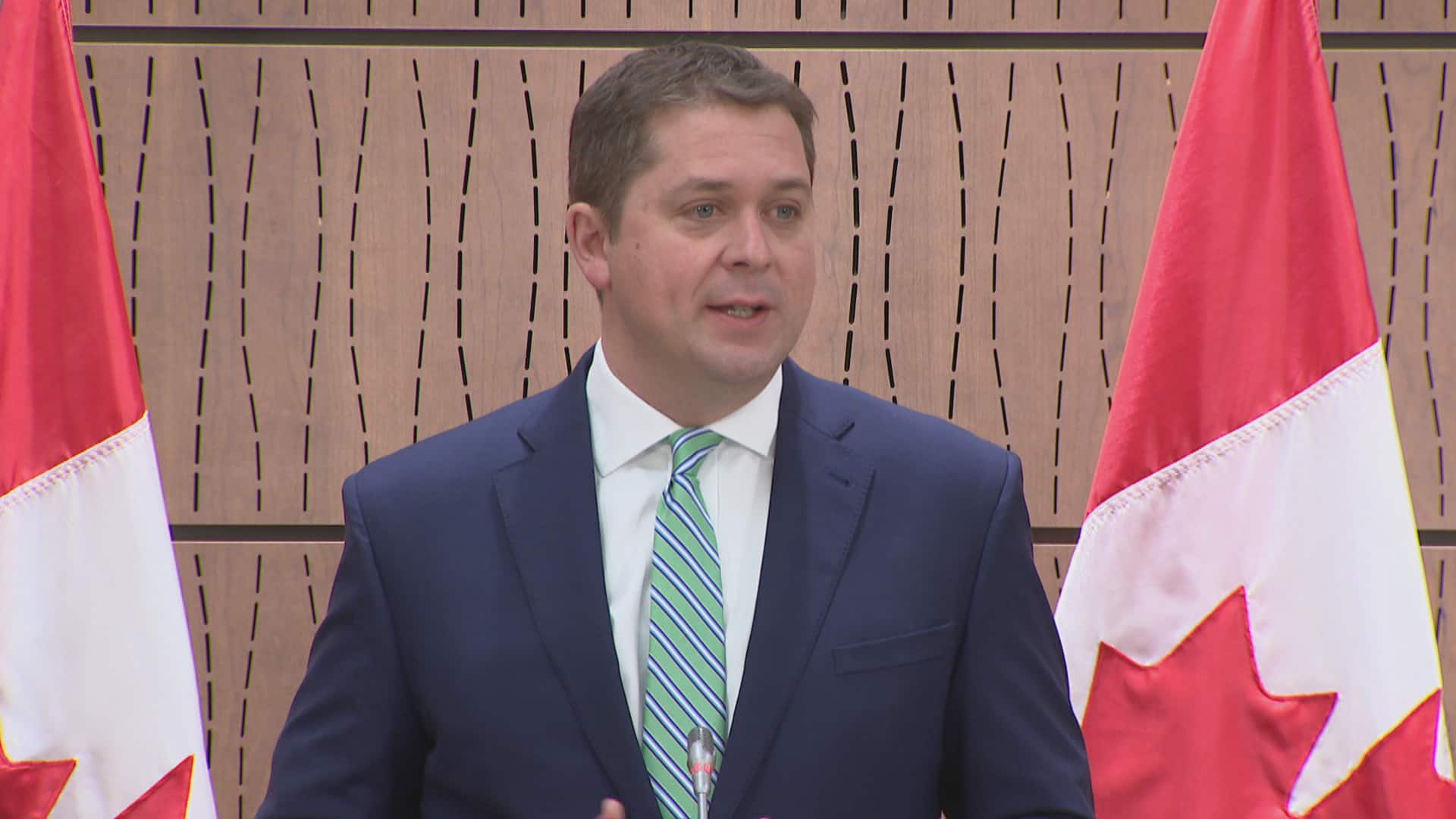 11 months ago
1:03
Conservative Leader Andrew Scheer says Parliament must continue to provide oversight of the government during the COVID-19 crisis.  1:03

The government has been negotiating with opposition parties to whip the bill quickly through the House of Commons within a few hours, followed by swift approval by the Senate on Wednesday and royal assent immediately after that.

Ordinarily, the power to impose taxes and allocate the proceeds is in the hands of Parliament, not ministers, and a government falls if the House of Commons won't support its budgetary plans.

Government House leader Pablo Rodriguez tweeted late Monday night that the government would change its draft bill before introducing it. "We will always work collaboratively and respect the fundamental role of Parliament," the Montreal MP wrote.

Tomorrow, we’ll seek to pass the emergency response to the <a href="https://twitter.com/hashtag/COVID19?src=hash&amp;ref_src=twsrc%5Etfw">#COVID19</a>. We consulted with the opposition and will bring changes to the draft legislation. We will always work collaboratively and respect the fundamental role of Parliament. <a href="https://twitter.com/hashtag/cdnpoli?src=hash&amp;ref_src=twsrc%5Etfw">#cdnpoli</a>

Liberals need the unanimous consent of all the MPs appearing in the House of Commons to quickstep the bill through in a matter of hours.

Government sources, who spoke on condition of anonymity because they were not authorized to discuss the bill before it's tabled, said the 21-month timeframe for the extraordinary powers was always negotiable, aimed at giving the government the flexibility to act quickly to provide relief during the crisis without having to wait for a week to organize a recall of Parliament if something new is required.

Except for the emergency sitting, the Commons is officially adjourned until April 20, and probably longer.

In a statement late Monday, Conservative Leader Andrew Scheer said his party is willing to enact the measures Trudeau announced last week, which include expanding the Canada Child Benefit and GST credits, relaxed Employment Insurance rules and $55 billion worth of deferred taxes.

"In a crisis, broad all-party agreement is essential, especially when the government has a minority in the House of Commons. And we are prepared to have Parliament sit as needed to transact the business of Parliament," he said.

"But we will not give the government unlimited power to raise taxes without a parliamentary vote. We will authorize whatever spending measures are justified to respond to the situation but we will not sign a blank cheque."

Meanwhile, the House of Commons is set to reconvene Tuesday with just over 30 MPs from all parties attending. The number of MPs from each party was agreed by House leaders beforehand as a way to keep people safe while maintaining party ratios in the Commons.

But as the details of the bill began to emerge, at least two Conservative caucus members, Sen. Linda Frum and MP Cathy McLeod, pledged to flout the risk of travelling and come to Ottawa to vote it down.

"I will hop on a plane immediately to vote against if this is true," said McLeod. "Completely unacceptable and not my understanding of agreement."

NDP Leader Jagmeet Singh said he wants to keep the return of Parliament focused on helping Canadians in need.

"We need to drop what we don't agree on and focus on what we were sent here to do — deliver for Canadians," he said in a statement.

Tuesday's events will be presided over by Deputy Speaker of the House Bruce Stanton, who will lay out how the day will work in a short speech just after noon.

The day will begin with the Speakers Parade, the parliamentary tradition that kicks off each sitting of the House. This time, however, all those in the procession led by the Sergeant-at-Arms will stay at least two metres away from one another.

Keeping a healthy distance in the parade is just one way the House of Commons will change its traditions to help stop the spread of COVID-19 between people.

Hand sanitizer stations will be placed strategically throughout the House and the public gallery will remain closed.

The number of MPs attending the session has been cut back from the full 338 to just over 30. Normally, MPs have to be in their seats to vote, but this rule is being relaxed to allow MPs to maintain a distance from one another of at least the width of two desks.

There also will be no parliamentary pages in the House today — so MPs will have to get their own water.

An unusual session of Parliament

Once Morneau has given his speech and tabled his bill, opposition MPs will be given the opportunity to question the government's proposals.

That question and answer session will take place in a more relaxed setting called the Committee of the Whole — a rare occasion when the entire membership of the House of Commons sits as a parliamentary committee, with the deputy Speaker chairing the session.

Morneau will take questions and is allowed to have three departmental officials help him flesh out the answers.

Rodriguez has said parties have agreed to devote four to four-and-a-half hours to debate, after which a vote will be held. If the bill passes the House, it will be sent to the Senate on Wednesday; assuming it's passed there, it will quickly receive royal assent.