Speaking to a packed and emotional chamber, Trudeau expressed shame, sorrow and deep regret to the civil servants, military members and criminalized Canadians who endured discrimination and injustice based on their sexual orientation.

"You are professionals. You are patriots. And above all, you are innocent. And for all your suffering, you deserve justice, and you deserve peace," he said.

MPs rose together in applause to the apology, which at times brought Trudeau to tears. 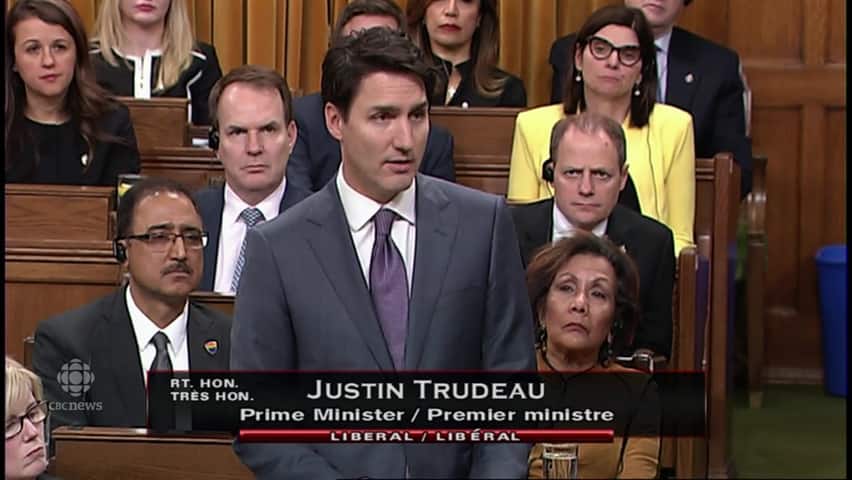 3 years ago
1:06
The Prime Minister apologizes to LGBT people who lost their careers in the military and security services because of the sexual orientation 1:06

Recounting how lives of lesbian, gay, bisexual, transgender, queer, and two-spirit Canadians were ruined by irreparable pain and grief, Trudeau said they were discriminated against by laws that "bolstered and emboldened those who wanted to attack non-conforming sexual desire."

"Our laws made private and consensual sex between same-sex partners a criminal offence, leading to the unjust arrest, conviction, and imprisonment of Canadians," he said. "This criminalization would have lasting impacts for things like employment, volunteering, and travel.

Laws and policies enacted by the government legitimized hatred and violence, and public service, foreign service and members of the military and RCMP were all targeted and persecuted in what Trudeau called "nothing short of a witch-hunt."

"From the 1950s to the early 1990s, the government of Canada exercised its authority in a cruel and unjust manner, undertaking a campaign of oppression against members, and suspected members, of the LGBT communities," he said.

"Those who admitted they were gay were fired, discharged, or intimidated into resignation. They lost dignity, lost careers, and had their dreams and indeed, their lives, shattered."

Trudeau said he hopes today is a "turning point," but called on Canadians to commit to ending discrimination against LGBT persons, who still face higher rates of aggression, violence, mental health issues and homelessness.

The apology comes with $145 million, which includes $110 million for compensation for LGBT civil servants whose careers were sidelined or ended because of their sexuality, and $15 million for historical reconciliation, education and memorialization efforts.

The RCMP and National Defence will also have new awareness and support programs, including a "positive space" initiative in the military to promote support and networking.

Helen Kennedy, executive director of the advocacy group Egale Canada, called it a "historic moment" and said the move to address wrongs of the past will be meaningful for young LGBT Canadians.

Conservative Leader Andrew Scheer condemned past state policies that not only failed to protect citizens and public employees, but actually perpetrated injustices with "over-reaching governments."

He pointed to the targeting of military men and women who were serving their country as particularly egregious.

"This type of insult is difficult to imagine and impossible to measure," he said.

Guy Caron, the NDP's parliamentary leader in the House, praised Svend Robinson, a former NDP MP who was the first openly gay member of Parliament and devoted much of his time to fight for LGBT rights issues. Robinson travelled to Ottawa and sat in the gallery for the historic apology.

Earlier today, the Liberal government tabled a bill that will allow people convicted of historical same-sex offences to have their criminal records expunged.

Proposed legislation aims to correct a "historical injustice" now recognized as the criminalization of same-sex activity by consenting adults, effectively removing from the record convictions that would today be inconsistent with the Charter of Rights and Freedoms. 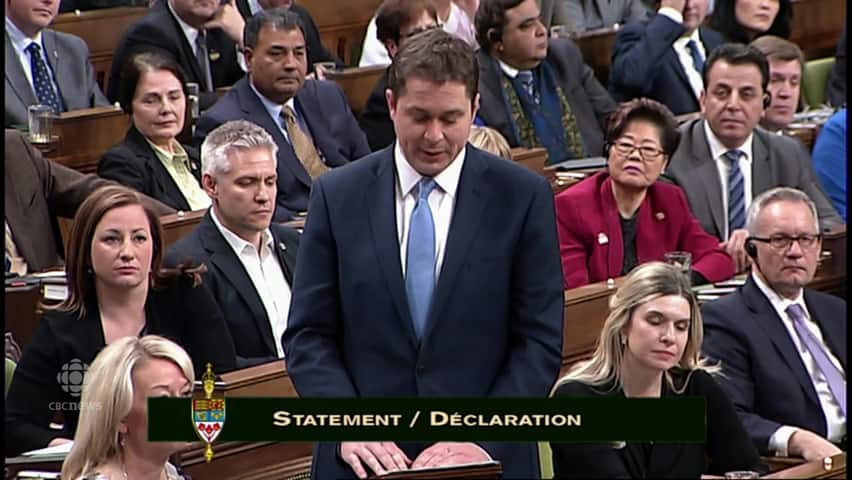 3 years ago
1:28
Opposition Leader Andrew Scheer, the NDP's Guy Caron and Green Party leader Elizabeth May spoke in the Commons after the PM made his apology 1:28

If the conviction is expunged, the RCMP is to notify municipal, provincial and judicial authorities to order that all records be destroyed.

"Since these offences identified both consensual and non-consensual activities, the charge information alone would not make the distinction," he wrote in an email. "Applicants will need to provide evidence that the conviction meets established criteria." 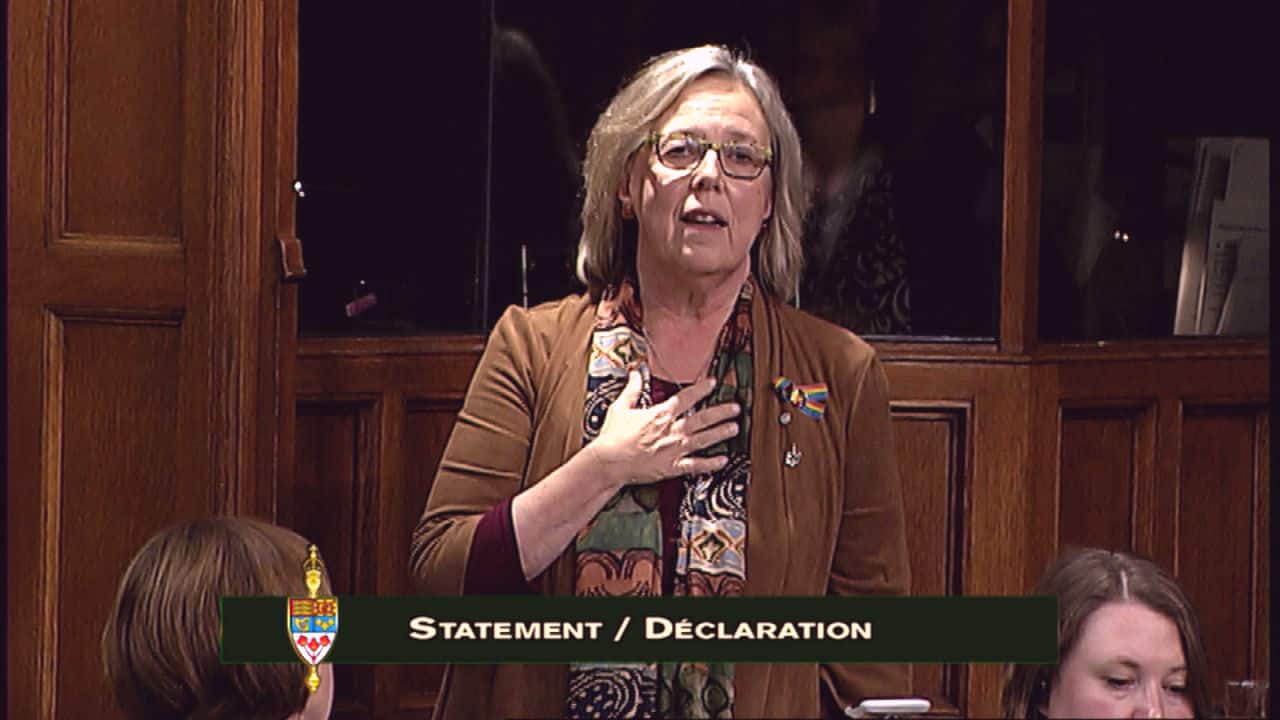 3 years ago
1:03
Green Party leader says she recently lost a friend, Brandon University professor Susan Roddy, who suffered discrimination as a trans woman. She spoke in the House of Commons after the prime minister's apology to the LGBT community. 1:03

Goodale vowed the process would be straightforward and cost-free. But Michael Motala, one of the authors of the report ("The Just Society Report: Gross Indecency") that encouraged the Liberal government to make the apology, has concerns.

He said the legislation puts too much onus of those affected by government policies to come forward, prove they faced discrimination through documentation, and file an application with the Parole Board of Canada.

Many people have already passed away and family members might not even be aware they had someone in their family who was subjected to the "queer purge," he added.

"This might just be too much trauma for some people who simply don't want to revisit it," he said in an interview with CBC News. "The thrust here is really about restoring the dignity of people… the government should have more proactively identified those eligible and look through their records, and steer the process."

A similar bill was tabled in New Zealand earlier this year, allowing for the expungement of criminal records for historical offences such as indecency, sodomy and keeping a place of resort for homosexual acts.

The New Zealand bill's first reading in July 2017 was accompanied by a formal apology to those convicted of historical homosexual offences, and was then referred to the justice committee.

Trudeau apologized for actions the government took against thousands of workers in the Canadian military and public service in the 1950s to the 1990s, including thousands who were fired because of their sexuality as part of a "national security" purge. 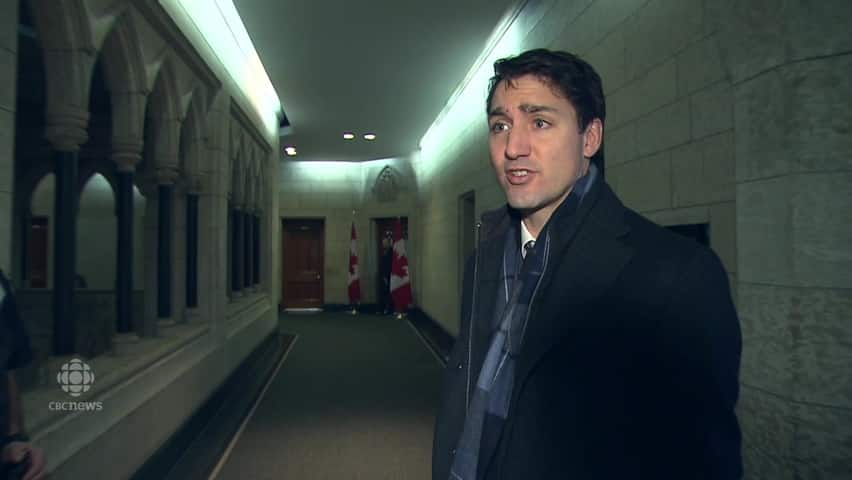 3 years ago
0:21
Prime Minister Justin Trudeau briefly spoke with reporters as he arrived for his weekly cabinet meeting 0:21

Some gay members of the Canadian Armed Forces were also discharged for what was termed "psychopathic personality with abnormal sexuality."

Ontario Liberal MP Rob Oliphant, who is gay, was overcome with emotion today. He said an apology tells people it's not OK to be homophobic or transphobic, but warned that media, teachers, politicians and others must be vigilant in promoting equality.

"It's very important that we start here, but that we don't stop here," he said.