The Conservative government is pardoning a group of farmers who were arrested for trying to sell their wheat under the old law governing the Canadian Wheat Board's monopoly as they mark the first day on which prairie producers can sell outside the board. 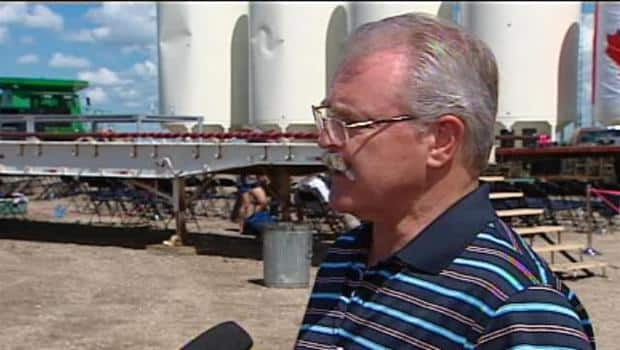 The Conservative government is pardoning a group of farmers who were arrested for trying to sell their wheat under the old law governing the Canadian Wheat Board's monopoly as they mark the first day on which prairie producers can sell outside the board.

Prime Minister Stephen Harper made the announcement this afternoon at a farm outside Kindersely, Sask.

"Never, never again" will western farmers alone be punished for trying to sell the wheat they grew on their land, Harper said to a round of applause.

Harper recalled how the farmers drove "a few loads of grain" across the border and were arrested and convicted for it.

"These people were not criminals. They were our fellow citizens. Citizens who protested injustice by submitting themselves peacefully to the consequences of challenging injustice."

First day without wheat board monopoly

The grain growers belonged to a loosely knit group called Farmers for Justice. They would often have their vehicles or equipment seized at the border, and in some cases were charged and convicted for breaking the law. At least one producer spent several months in jail. In 1997, a dozen farmers were convicted of failing to surrender their vehicles to Canada Customs — now Canada Border Services Agency — and nine were convicted of not having the wheat board license required to export grain.

Harper has a long history of supporting the farmers who fought the wheat board. In 2001, he wrote a review of a book on that battle, calling the wheat board an "oppressive monopoly" that used "legal bullying" against farmers.

Harper and Agriculture Minister Gerry Ritz were at the farm to mark the first official day in which prairie wheat and barley farmers can sell their products to whomever they choose.

Parliament approved legislation last December to end the grain-purchasing monopoly and give a reorganized wheat board four years to come up with a new business plan. If the plan doesn't satisfy the minister, the government could shut it down.

Referring to the day as Marketing Freedom Day, Ritz bragged about it Tuesday in Saskatoon, standing next to a countdown clock.

Supporters say the board, acting as one seller, was able to negotiate higher prices for farmers in bad years when their return would have been lower. The wheat board exported Canadian grain.

Detractors said they wanted the ability to sell their grain to buyers of their choice, which they weren't allowed to do under federal law.

The change could come at a good time for farmers — and for the government that made the decision, which drew protests from those who said they preferred going through the wheat board to selling grain individually.

Market analysts say a major drought in the United States and low grain yields in places like Russia could result in a big demand for Canadian grain.

Ian White, CEO of the new wheat board, said grain prices are predicted to stay high.

Outlooks provided by the wheat board show higher production than the past three years and an estimated $6.3 billion in sales for western Canadian wheat and barley farmers.

But Stewart Wells, chairman of the Friends of the Canadian Wheat Board, says farmers would be getting higher prices if they were working through a single desk to sell their crops, and he expects the government to claim prices are higher because of the end of that single desk.

"The wheat board that was created [after changes] in 1998 when the farmers were put in control had become a very strong advocate for the farmers," he said.

Wells says it's hard to know right now what the change will mean next summer or further down the road when the world markets would be different.

"A lot of the negative effects of this change are going to be felt over 24, 36, 48 months, but at the end of the day, it's the transfer of wealth and influence away from farmers [that matters]."

Wells is among a group of farmers who have launched a class action suit against the federal government over the end of the wheat board monopoly.

On Tuesday, the government gave notice to the Federal Court of a motion to dismiss the claim, Wells said. The government argues in the notice that the farmers have no reasonable cause of action.

Allan Mussell, a senior associate at the George Morris Centre, an agri-food think-tank, says buyers will have to get adjusted to the changes. Those changes could result in a leaner grain-handling system that gives handlers more cash to use for bidding on prairie grain, he said. At the same time, it's the drought in the U.S. that is pushing up prices right now and could ease the concerns of farmers who have to get used to the new board, he said.

"If there was going to be any sort of disruption from the perspective of the farmers, nothing better than extraordinarily high prices to paper that over," Mussell said.

White said the agency has received strong indications that farmers will continue to market their grain through the Canadian Wheat Board.