Text of prepared remarks by Prime Minister Stephen Harper to the Appeal of Conscience Foundation awards dinner Thursday, where he was named World Statesman of the Year.

'Rarely has the future of the free and democratic world been less secure,' Harper tells New York audience 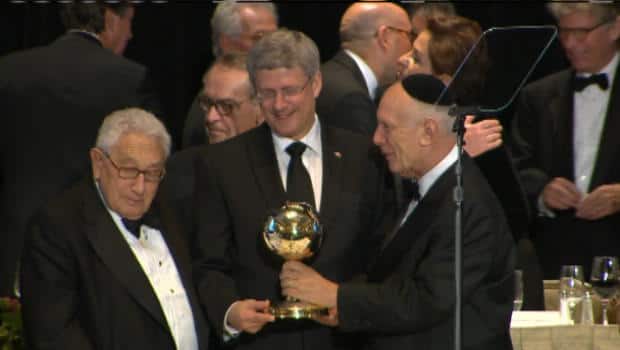 World Statesman of the Year

8 years agoVideo
51:23
Stephen Harper addresses the Appeal of Conscience Foundation in New York, as he is honoured as World Statesman of the Year. 51:23

In acception his award Thursday night, Harper spoke of Canada's relationship with the United States, Canada's approach to the threat posed by Iran and principles of Canada's foreign policy.

Here is the full text of Harper's prepared speech, as released Friday by the Prime Minister's Office:

First, I want to begin by thanking Henry Kissinger for that generous introduction.

I have to say Dr. Kissinger, I am of course aware not only of your immense contributions to your country and international relations, but I have long been an admirer.

I have to tell you, I have been an admirer indeed since before I was old enough to vote.

So being able to share the stage with you and to be introduced really does mean a great deal to me.

I'm also, of course, honoured and want to thank Rabbi Schneier for the fact that we are all here tonight.

In a globe of conflicting and complex and competing interests, it is far too easy to set aside the silent and subtle appeals of the conscience.

You have made it your life work to take the horrors of your own experience and to use them to remind us of something truly hopeful: the freedom and human dignity of every person.

And so you have our admiration and our appreciation!

Ladies and Gentlemen, it is upon this foundation — of freedom and human dignity — that Canada seeks, in an uncertain world to articulate a foreign policy built on certain principles.

These principles are rooted in our own country’s ancient heritage and long practice of freedom, democracy, human rights and the rule of law.

But it is more than that.

On foreign affairs, there is a widely shared consensus among Canadians, a generosity of spirit that one might describe as a simple desire for fair play.

We Canadians, for example, are very conscious of our own sovereignty and we expect our governments to make pragmatic decisions in Canada’s national interest.

But we also want those governments to be good world citizens, to try to understand other points of view and to act in concert with our partners, for the wider interests of humanity.

That is, of course, not the same thing, friends, as trying to court every dictator with a vote at the United Nations or just going along with every emerging international consensus, no matter how self-evidently wrong-headed.

When confronted with evil in the world, we do take a stand, we take strong, principled positions in our dealings, whether popular or not.

And that is what the world has counted on from Canada — and received — in two world wars, in Korea, in a generation of peacekeeping operations, Gulf War One, and of course, most recently in Afghanistan and also in Libya.

Finally, I came to tell you that Canadians are proud, fiercely proud, of the reputation we have established for both a competitive economy and a compassionate society, and for the unparalleled combination of cultural diversity and harmony which draws to us people of all nations.

In short, ladies and gentlemen, I come here tonight to accept your award, not for any qualities of my own, but on behalf of the unique and magnificent country that I have the privilege of leading.

Among the many assets of Canada is its neighbourhood.

That is to say that Canada has only one real neighbour, and it is the best neighbour any nation could possibly have.

Now Rabbi, we do remember that 200 years ago this year began the last war between our two countries, the war that effectively established our independence.

That our comparatively small country has since lived in secure peace and growing prosperity for almost two centuries is a testament to the enduring strength and the essential benevolence of the United States of America.

So thank you for our great partnership and for your unwavering friendship.

And, friends, allow me in this vein to offer you, let me offer you our unequivocal condemnation and outrage over the recent anti-American riots around your embassies and the deadly attack upon your consulate in Libya, and the deep sympathies of the Canadian people for all who lost friends and loved ones in that violent event.

I referred a few moments ago to our uncertain world.

What are the uncertainties and what are their consequences?

The years through which we are now passing seem to be times of extraordinary change, as if some great hand is spinning the wheel of history.

Nations with a history of shared values, like many of our friends in Europe, are weighed down by debts they cannot seem to control, by entitlements they can no longer afford, and by sluggish economies that show few signs of growth.

Meanwhile, new powers are rising, whose commitments to our ideals are often neither firm nor clear.

What appears to some a hopeful spring for democracy quickly becomes an angry summer of populism.

The world is probably a freer and more democratic place today when I look at it than at any point in my lifetime.

Yet, paradoxically, rarely has the future of the free and democratic world been less secure.

As I said, some new powers are neither sure friends nor implacable foes.

Because these are perhaps the most difficult, the hardest to evaluate, I will not elaborate on them here other than to say, it is ever important in interacting with them that we clearly understand and always remember what we are dealing with.

Other countries, however, constitute unambiguously a clear and present danger and thus demand a very sober assessment.

First among these is the Government of Iran.

I speak not merely, friends, of its appalling record of human rights abuse or its active assistance to the brutal regime in Syria, or its undeniable support for terrorist entities, or its continued denial of diplomatic rights, or its pursuit of nuclear weapons, rather it is the combination of all these things with a truly malevolent ideology that should concern us.

I believe that the appeal of our conscience requires us to speak out against what the Iranian regime stands for.

Likewise, it requires us to speak in support of the country that its hatred most immediately threatens, the State of Israel.

Now friends, in supporting Israel, we don't sanction every policy its government pursues.

When, however, it is the one country of the global community whose very existence is threatened, our Government does refuse to use international fora to single out Israel for criticism.

And it is important to state, that whatever Israel's shortcomings, neither its existence nor its policies are responsible for the pathologies present in that part of the world.

And we are also mindful of an lesson of history, that those who single out the Jewish people as a target of racial and religious bigotry will inevitably be a threat to all of us.

Indeed, those who so target Israel today are, by their own words and deeds, also a threat to all free and democratic societies.

Now friends, I say these things not to counsel any particular action, not to wish any additional hardship on the long-suffering Iranian people and certainly not to advocate war, but rather so that we not shrink from recognizing evil in the world for what it is.

Our Government simply contends that the international community must do more, must do all it can, to further pressure and isolate this regime.

Ladies and gentlemen, let me just conclude with this.

But where evil dominates, you will invariably find irreconcilable disagreement with the ideals that animate Canada, America and like-minded nations, the ideals which assert that all people possess human dignity and should be accorded equal rights.

It is not for Canada to lecture others, but it is the responsibility of our Government to make the choices that circumstances force upon us, and these are the choices we shall make.

First, we shall choose our friends well.

And our true friends are those who to their core both respect the will of their majority and the rights of their minorities.

Second, we shall deal openly and fairly with those who may not be our friends, but we will not deceive ourselves about those relationships.

And we shall not sacrifice our guiding principles in the interests of some transient advantage.

Third, we shall endeavour to recognize clear and unequivocal threats and we shall speak out against them when they stand before us.

And finally this, for ourselves, we shall strive to manage our own house, our economy and our finances, in such a way that our own freedom of action is not compromised.

Because we must remember that the ideals for which we stand may be invaluable, but they are not invincible.

They require our countries to be vigilant and well governed.

And they require us to forever impress their privileged nature upon our successive generations.

We therefore must hold on to them ourselves and teach them to our children.

We must speak of democracy in our schools.

We must praise freedom as we go out and justice as we come in.

We must value our institutions and their endurance.

And we must cherish the individual rights for which our ancestors bled and inscribe upon our hearts, the vision of citizens who know what it is to live without fear.

For in the end, that is the mark of liberty.

My friends, if we do these things, our nations shall endure and shall continue to inspire others.

And those of us to whom leadership has been entrusted will have done all that can be expected of them.

Thank you very much for having me, for the honour you've extended, for your invitation this evening.